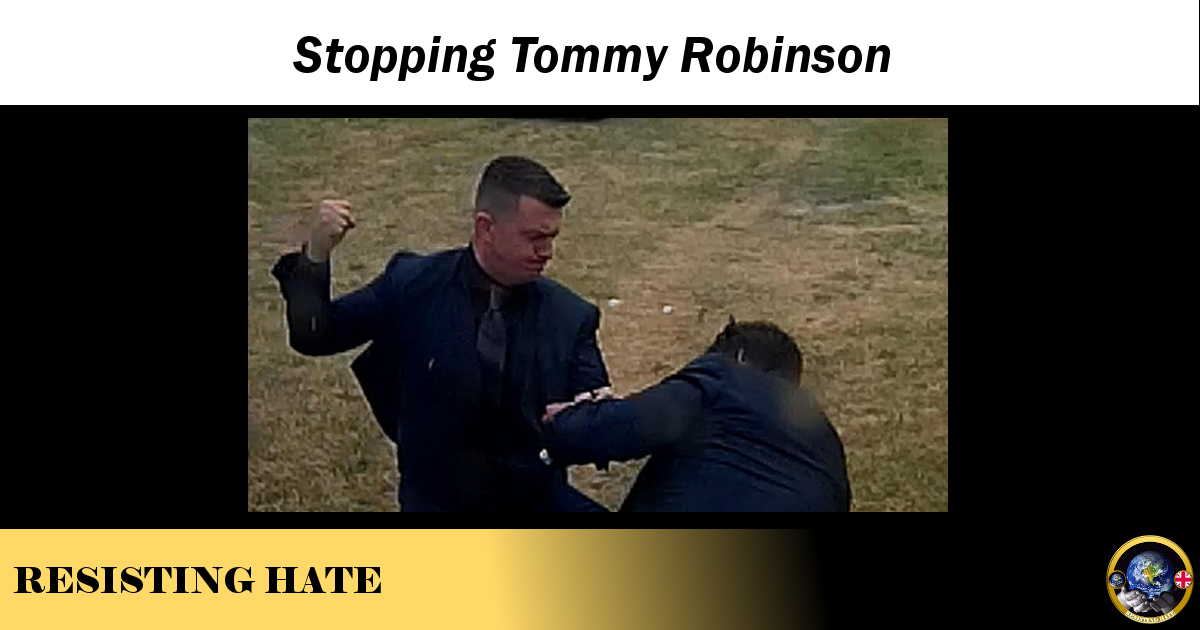 We are raising money to help Mike Stuchbury sue Stephen Yaxley-Lennon (AKA Tommy Robinson) with the intention of holding Lennon accountable under English law for his harassing and intimidating behaviour.

This is our link to the campaign where you can make a donation to the legal fees.

Background to the campaign

In November 2018 a Go Fund Me page was set up in aid of Jamal the Syrian refugee from Huddersfield who together with his sister had been relentlessly bullied at school.

Thanks to the generous support from the public, the funding page was successful and enabled Jamal’s family to move out of the Huddersfield area and start a new life in a new city. Unfortunately the far right, headed by Tommy Robinson, embarked on a campaign of defamation together with physical as well as online harassment of Jamal’s family and those who were prominent in support of them.

Jamal’s family took the brave decision to sue Tommy Robinson for the lies he had spread about them , as part of that exercise a crowdfund page was setup to help fund the legal action. The page was promoted by Mike Stuchbury, amongst others on social media and the target of £10,000 was achieved in short order. Legal papers were prepared and served to Lennon’s house (during daylight hours with police present).

Lennon was so enraged at being sued and that he had been served documents to that effect that he tracked down Mike Stuchbury and engaged in a campaign of terrorising Mike and his family.

In October 2013 Lennon attempted to intimidate a ‘Garry Moon’, (the alias of a critic of the EDL who ran a news site asking questions about the funding arrangements of the group.) Lennon took to Twitter and posted pictures of the approach to what he believed was Mr Moon’s home address. Fortunately Lennon clearly did not understand the concept of a pseudonym and was in fact approaching the address of an entirely unrelated individual.

In November 2016 Ian Mcloone, a partner at Luton-based Taylor Walton LLP, took to Twitter to criticise ex-English Defence League leader Stephen Yaxley-Lennon, AKA’ Tommy Robinson’, over negative comments he supposedly made about Luton.

In his post, Mr Mcloone mentioned that ‘Tommy Robinson’ no longer lives in Luton and included the name of the settlement where he resides – already published by media during coverage of a court hearing earlier this year.

Mr Robinson quickly reacted and accused Mr Mcloone of publishing his ‘address’ and thereby endangering his children. He turned up twice at the lawyer’s Luton offices and once at Mr Mcloone’s home to confront him over the tweet.

These confrontations were filmed by Mr Robinson and posted on You Tube. Filmed while standing inside Taylor Walton’s office in Alma Street, an angry Mr Robinson says to Mcloone: “My children have been in a hotel the last four days because of you, are you aware there’s a threat against my life!

Mr Robinson was arrested by police outside the offices on suspicion of harassment last Thursday and a High Court injunction was secured against him along with planned civil action, although these were dropped by Taylor Walton after Mr Mcloone’s resignation on Tuesday.

In an online statement, Mr Mcloone insisted he had not tweeted Robinson’s home address, only the name of the settlement. He claimed that after Mr Robinson’s videos appeared online, he and the firm had been targeted on social media by others.

In April 2017 another freelance journalist, Tim Fenton, suffered the unwanted attentions of Robinson at his home address. Tim has written for various news platforms including Al Jazeera but is perhaps best known for his blog entitled Zelo Street, where Tim writes about figures on the right wing.

Some of Tim’s writings sparked the ire of Robinson and spurred the violent little gnome into making a 290 mile round trip to Tim’s home to harass him.

According to a blog published by Fenton, Yaxley-Lennon arrived at 10pm and proceeded to bang loudly at the front door while shining high-intensity lights in his face. It seems the confrontation was halted only when the police arrived.

While driving to the altercation Yaxley-Lennon made a Facebook Live video threatening his critics, stating: “Guess where I am on my way to? If you’ve been talking shit online. If you’ve been trolling. If you’ve been lying about me. I could be about to land at your front door.”

When the Police intervened, they took Lennon’s details and asked him to leave the area. Lennon’s work had been done, apart from the harassment he himself caused Tim, he had made Tim Fenton a target for his supporters who subjected Tim to online abuse for weeks after Lennon’s visit.

The abuse suffered by Edel was the most serious case amongst Robinson’s victims because, according to close friends, the intimidation by Robinson led to a decline in her mental health which consequently resulted in her taking her own life.

Death threats and threats of rape by Robinson’s supporters were something Edel was accustomed to, but she had a breakdown when she was beaten up after a union demo by Robinson supporters who had been stalking her all day.

This attack resulted in an associate of Robinson’s and known football hooligan Joe Marsh being sent to prison.

Following the assault Edel endured a troubled year of personal as well as mental health issues, she became estranged from her family and moved into her own flat and lived alone.

Having begun the process of restarting her new life, Edel’s health was improving and she was returning to her normal self.

Her progress was halted when Robinson targeted her on the social media platform Twitter. Robinson accused Edel of putting his address online (in truth Robinson had tweeted a letter from the Police with his name and address on it himself and thus made his own address available to the public. )

Robinson somehow acquired an address for Edel and visited the home of Edel’s children. Several weeks later Edel went to her local shop and noticed a car parked opposite her flat with three men in it. The men saw her and immediately drove off. Later that night, Lennon tweeted, “She will jump in Jubilee“. Edel lived on Jubilee Street and Robinson was letting her know that he knew where she lived. Edel’s friends tell us that after he tweeted her road name, Edel’s mental health declined precipitously, she lived in constant fear of assault at the hands of Robinson’s followers.

This fear and decline of her mental health resulted in Edel taking her own life in July 2018.

Intimidation by Robinson, death threats, rape threats and threats to kill her children by Robinson’s followers were constantly mentioned in the Bedfordshire coroner’s inquest into Edel’s death. Harassment by Robinson and his followers was found to be one of the contributory factors resulting in Edel taking her own life.

In January 2019 Steward McDonald accused ‘Tommy Robinson’ of using a ‘coordinated gang’ of men to surround his constituency surgery and block off fire exits.

Robinson initially livestreamed himself prowling around a Glasgow library where Stewart McDonald was to meet constituents on Friday. Footage showed two police officers blocking the entrance and others waiting in a patrol car, which later drove Mr McDonald away.

The Scottish National Party MP said Pollokshaws Library was ‘Tommy Robinson’s’ second planned, after he and a cameraman burst into another surgery at a community hall but found their target was not there.

“My staff were alone at the first surgery, and a group of men accompanying Mr Yaxley-Lennon blocked off all the exits to the library,” Mr McDonald wrote on Twitter. “Far from being one man and his phone, it was a coordinated gang.”

One of the men was ‘Tommy Robinson’s’ supporter Daniel Thomas, who frequently protests with the far-right UK “yellow vests” group in London.

Mr Thomas was jailed in 2016 after he tried to kidnap the wrong person near Portsmouth as part of an armed gang.

In 2005, ‘Tommy Robinson’ was jailed for 12 months for assault occasioning actual bodily harm, for which he was sentenced to 12 months’ imprisonment, and assault with intent to resist arrest, for which he received a concurrent term of three months for .

In 2010, ‘Tommy Robinson’ was charged with assaulting a police officer during clashes at a poppy burning protest. After the incident, fighting, a police officer was taken to hospital after trying to intervene in a 50 man brawl.

In 2011, ‘Tommy Robinson’ and EDL co-founder Kevin Carroll flew to Zurich to protest (on the roof of a FIFA building) that England were not allowed to wear poppies on their kit due to FIFA’s political symbol ban. They were fined £3,000 for their troubles.

Assault at his own rally

In 2011, ‘Tommy Robinson’ was convicted of assault for an attack at an EDL march in Blackburn. After he was goaded for being a government and police informant, ‘Tommy Robinson’ launched into a verbal tirade against those protesting against him.

Robinson then proceeded to head butt one of the march attendees.

In July 2011, ‘Tommy Robinson’ was found guilty of leading a brawl that included 100 Luton Town football fans in a fight with Newport County fans. Fans were heard chanting ‘EDL till I die.’ For the crime committed he was given a suspended 12-month prison sentence and banned from Luton football matches for 3 years.

In January 2013, ‘Tommy Robinson’ was jailed for 10 months for travelling to the USA on his friend’s passport. ‘Robinson’ admitted the charge of possession of a false identity document with improper intention. The passport ‘Robinson’ used was under the name of Andrew McMaster. He checked himself in on the way out from Heathrow airport however when he arrived in the USA customs officials took his fingerprints and realised he was using a passport that was not his own.

Whilst passing the sentence, the judge told ‘Robinson’: ‘This was an operation which was fraudulent from the outset and involved a significant amount of forward planning.’

“I am satisfied you took part in a thoroughly dishonest course of conduct,’. he told him.

In 2017, ‘Tommy Robinson’ was given a 3 month suspended sentence after he admitted a contempt of court charge for attempting to photograph juvenile defendant in a court case whilst having no right to do so. Court security had told ‘Robinson’ not to film in and around the court as it would lead to his arrest. The 3 month suspended sentence could be activated within 18 months.

Finally, earlier this year, the crucial case that led to ‘Tommy Robinson’ being jailed .

‘Robinson’ was arrested after ‘Facebook live streaming’ outside Leeds Crown Court for an hour despite there being reporting restrictions on an ongoing sensitive ‘rape gang’ case. Because he had a suspended sentence for the same crime previously, the judge sentenced ‘Tommy Robinson’ to 13 months in prison. Robinson pleaded guilty. Despite his guilty plea, “Free Tommy” protests were sparked by his supporters.