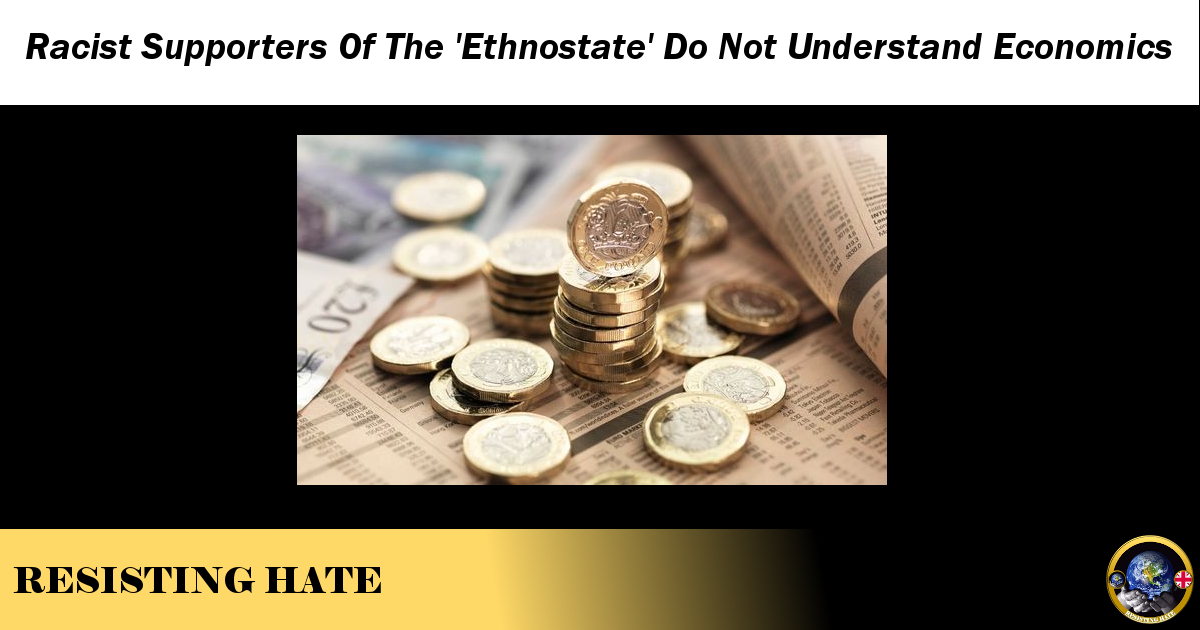 The latest idiocy from Neo Nazi group Patriotic Alternative is the suggestion that Britain become an ‘ethnostate’ and, in order to achieve this, their policy is to give all non whites £15k to leave the country.

The morality of this proposal aside, it is a ludicrous and unworkable proposition based on a total ignorance of economics.

Patriotic Alternative propose to fund their scheme by printing more money. Yes their members are actually in chat groups calling other people stupid for not realising that a government in power could print as much cash as they like.

They would facilitate this by building their own bank!

Printing money as a last resort to stimulate an economy is known as quantitative easing. As a short term method it can work. However the problem is that the more money you plough into an economy, the less value it has.

Devaluing the currency leads to high inflation. This is when the value of money fails to keep up with the price of goods. So, put simply, your £20 food shop will buy you fewer products. You still have £20 in your purse but the buying power of that £20 becomes less and less as inflation increases.

When inflation becomes extremely high it is known as ‘hyper inflation’. The danger with hyper inflation is that the economy is no longer attractive to investors who will seek to invest in foreign markets. So the wealth in the country starts to move out of the economy leading to a further spiral of economic downturn.

High inflation also means financial stress for public services. Take the NHS as an example. They still have to purchase all the equipment and medicine to keep functioning but their funding is not stretching as far due to the increasing divide between purchase power and the cost of goods.
In order to ensure public services are funded the government of the day would be forced to increase taxes. BUT as the economy is struggling as a result of high inflation employers cannot afford to increase wages to keep pace with higher taxes.

So the person in the street at this point is paying more out in tax, their income has less value and public services are stretched.

But it doesn’t end there. The way to combat high inflation is usually to increase interest rates. So now the person in the street is finding that when he/she wants to borrow money it is at a higher cost. Mortgage payments rise, credit cards and personal loans become harder to obtain.

Higher interests rates lead to a slowing in economic growth which in turn can potentially lead to recession and an increase in unemployment.

Apart from their naive printing money strategy, the other funding suggestion from the Nazis is to offset the savings made if Britain deported the criminal element of the non white community. This argument seems to rest on the premise that UK prisons are teeming with non white individuals. Unfortunately for the Nazis, this is a fallacy.

Just over a quarter of UK prisoners are classed as from a minority ethnic group.

There are approximately 9 million non white people in Britain. The cost of the Patriotic Alternative plans (even allowing for the fact they have only factored in the basic £15k and not the other costs discussed below) is a cost of £135,000,000,000. The prison savings of £471,238,872 hardly begin to make a dent in the costs involved!

Members of Patriotic Alternative also claim if “UK stopped funding Israel” then there would be a significant saving. There is little evidence to suggest the UK give money of any consequence to Israel. A freedom of information request ( from 2011) shows minimal levels of aid. (Extract below). Certainly aid to Israel has been discussed by the UK Parliament but it was not implemented.

Perhaps Patriotic Alternative are getting confused with the trade agreement with Israel signed last year and which are predicted to have a beneficial impact on the UK economy.

So it can clearly be seen that the proposals of Patriotic Alternative to fund their £15k per non white person repatriation have no established source of funding. The suggestions that funding would come from savings in the prison system, the benefits system or by stopping aid to Israel do not even come close to funding either the scheme itself or the huge hole in the economy that a mass exodus of tax payers would leave.

Patriotic Alternative have considered the £15k per person but what they have failed to take into account is all the additional costs of losing a large chunk of our population.

It is ludicrous to assume (as the fash do) that all non whites are on state benefits. The official government stats show the accurate picture.

The average salary in the UK is £28k. If we did lose the non white population we are also losing their contribution to the economy. Income Tax, Council tax, VAT.

So 9 million non whites. Assume half in work (figures are actually higher as Gov stats above show demographics receiving some support which does not necessarily imply full income replacement) and contributing to economy.

The average savings for a person in the UK is £800-£900. We can clearly see that over 95% of the average salary of a UK individual is being pumped back into the economy. So £122,594,175,000 being ploughed into our economy annually by the working non white population.

Diverting this income stream from our own economy to the economy of another country would massively slow the growth of our own economy. Assuming a taxation of 10% (to adjust figures for personal allowance) this would represent an approximate annual loss of £12,259,417,500 in tax each year.

The other cost Patriotic Alternative have failed to consider is the cost of sending British citizens to other countries. They claim to have allowed for ‘repatriation’ costs in their £15k but the majority of Black, Asian and non white citizens in the UK are British. They cannot be repatriated, they already live in their home country!

So if Patriotic Alternative want other countries to take in British citizens they would have to be prepared to offer some very significant financial incentives for the other countries to do so. This has never been discussed by them to my knowledge and is certainly not accounted for in any of the figures.

Then the skills gap needs to be considered. If Britain were to lose many of its skilled and professional workers overnight then there would need to be a mass training program to upskill new workers. In the kind of economic carnage this forced ‘repatriation’ has left in its wake there is no money available to train anybody. More carnage, more financial chaos and more negative impact on public services.

When a wannabe political party like the idiotic Patriotic Alternative comes up with ridiculous policies like “Give all non whites £15k to leave Britain” they look to lure the gullible and the easily led to promote them. These people, unable to think critically or to evaluate the policies simply regurgitate the same old rubbish. They have no understanding of economics whatsoever.

The ‘ethnostate’ would leave in its wake a destroyed economy, mass unemployment, underfunded public services and high inflation. Borrowing would be out of the question for all but the wealthy.

Patriotic Alternative claim to ‘love their people’. Their whole ethos is the racist ’14 words’ which talks about securing a future for (only) white children. Yet their core policy would result in an economic catastrophe that would mean a very bleak future for all the children in the country.

I would be interested to know if the leadership of Patriotic Alternative are too ignorant to run the maths or whether they believe that economic carnage is an acceptable price to pay for not having to see someone on the street with a different skin colour to themselves.

It is dogwhistle, uncosted, nonsensical policies like this £15k idiocy from Patriotic Alternative that (thankfully) keeps racist idiots out of mainstream politics.