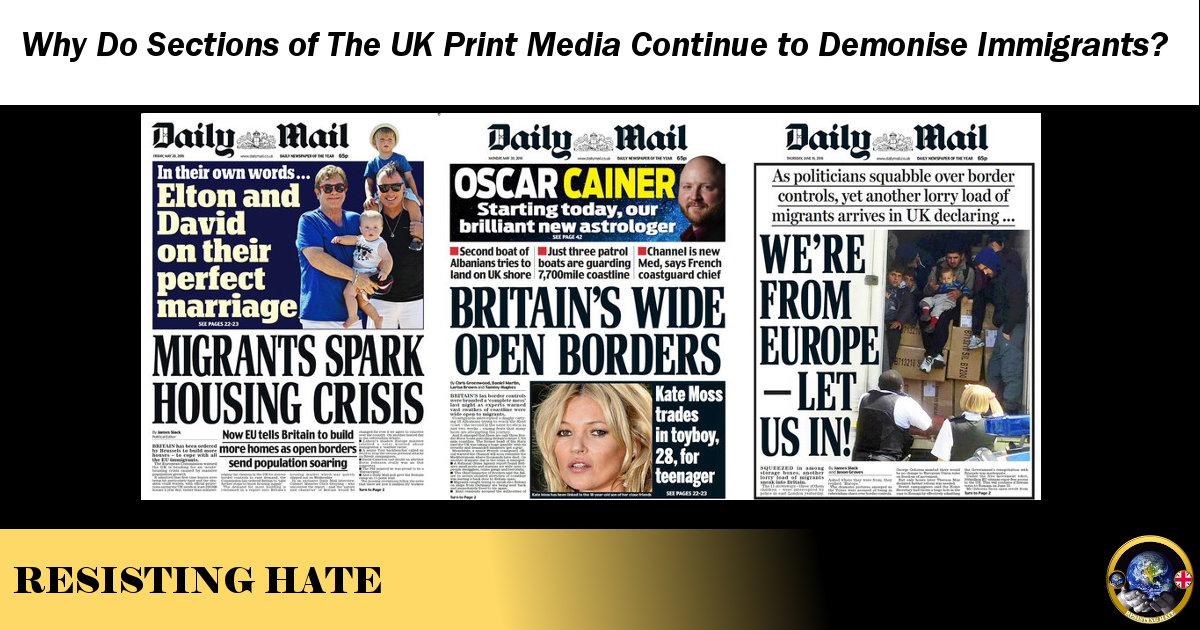 The way in which migrants are framed by the British media is immensely damaging. Despite often having overcome a multitude of traumatic situations in pursuit of a new life, migrants are repeatedly and systematically depicted in a negative light by our newspapers.

Given the inextricable link between media reportage and public opinion, such skewed coverage has a hugely deleterious effect on social integration. Many of the myths peddled by our newspapers become accepted as fact- the public’s average guess at the size of our immigrant population is 24%, when the reality is just 14%. It is impossible not to link such inaccurate perceptions to the plethora of articles that accentuate the number of migrants arriving in Britain.

In order to bring about positive change, it is not enough to simply call out the linguistic choices of journalists. The language used in articles should prompt discussion of the root causes of skewed coverage, namely how the processes of news production embed such hostile perspectives.

The language that journalists use to describe migrants and migration is ideologically charged and loaded with toxic negativity. From 2010-2012, a study examining the language used by twenty of Britain’s daily and Sunday newspapers provided a tangible insight into the patterns of language relating to immigration.

The study involved the analysis of a 43-million-word corpus, and shed light on a host of interesting truths. For example, the word used most frequently in accompaniment with ‘immigration’ was ‘illegal’, and the term most closely attributed to ‘asylum’ was ‘failed’. The depiction therefore of immigration and asylum is a picture of wrongdoing and abject failure. Indeed, almost half of the articles assessed in the study identified migrants as a potential danger to the country. Given that asylum seekers are by definition fleeing war and persecution, it is extremely distasteful to frame them in this way.

In articles covering immigration, the views of migrants very rarely feature. A study carried out by Migrant Voice in 2014 showed us that, in 557 news articles sampled between January and April 2014, only 12% carried quotes directly sourced from migrants. Only now, with migrants so central in our collective fight against COVID-19, are we beginning to see the narrative shift somewhat. Those who only a few weeks ago were classed as ‘low-skilled’ are now being heralded as key workers. It appears as though the immense benefits of immigration are slowly beginning to get recognised. However, whether or not this will lead to permanent positive change remains to be seen.

The failure of journalists to include the thoughts and feelings of migrants in their coverage was again uncovered in research leading up to the 2015 General Election. Of the thousands of articles which ran on the topic of immigration in this period, only 15% included direct quotes and accounts from migrants. Whilst higher than preceding averages, it is startling that the views of migrants can be so systematically left out of the discourse despite their experiences existing at the heart of the issues being discussed.

On the occasions when migrants do have their voices adequately projected in the media, it is often to fit a particular agenda. The process of immigration is frequently described as extremely dangerous by sections of the media, and migrants are labelled as victims. This “victimhood” could come in the form of alleged trafficking, and a desire to flee desperate circumstances. This narrative serves to underestimate the capability of migrants to add anything to the UK economically and socially, and when garnished with scaremongering language, labels migrants as a likely drain on resources. When describing migrant movement, tabloids in particular choose to use terminology such as ‘flood’, ‘wave’ or ‘surge’, which are adjectives commonly used to describe disaster and catastrophe.

Whilst it is of huge importance to point out these linguistic trends, they will ultimately persist until their origins are tackled. To do this, both the culture of the media industry and the processes of news production must be looked at critically.

At least part of the answer must lie in the chronic under-representation of immigrants in the print media industry. There is a justified perception of media corporations in the UK as simply stomping grounds for the white privileged male. This idea is encapsulated in the words of a female employee, who states that:

‘There’s a clique of laddy, white men, who go for a drink, pass around big jobs between them. Women try to oppose it…’

The representation of immigrants in such roles is massively disproportionate. Mono-ethnicity in the workplace is a pressing concern in many sectors, but the media industry suffers from a notable lack of diversity. With the processes of news production dominated by white men aged forty-plus, there is a sense that editorially, stories are geared up to suit this particular demographic. A major step towards bringing about more balanced reportage would be increasing the levels of diversity in the newsroom. In particular, migrants themselves should be provided with opportunities to work in the industry. If those with first-hand experience of migration can play a part in the editorial process, it is inevitable that events will be depicted with greater levels of decency and fairness.

The UK immigration system itself is a factor, with the need for a sponsor licence makes it difficult for employers to recruit overseas nationals. In order to bring about true equality, it is vital that our new system ensures that overseas nationals, including migrants, are given a pathway into the media industry.

The processes of news production lead to skewed coverage due to the overall editorial perspective of a newspaper taking precedence over truthful and balanced reportage. Accuracy is shunned in favour of sensationalism, leading to fair coverage of migration being traded in for sales and profit. This, taken from a journalist who was asked during the study if the term ‘migrant’ is more likely to be loaded or neutral, shows us just why hostile language is so frequently used in association with immigration in the UK:

“To be brutally honest, it’s more likely to be people who are a burden on society than those who are a benefit to society… from our perspective it’s more newsworthy if people are abusing the system or exploiting loopholes or abusing the hospitality being extended to them by British society… because that triggers a reaction in readers.”

Migrants need to be accepted into the UK and recognised for their immense contribution to our economy and society. In order for this to occur, the media industry needs to be re-evaluated so that accuracy and decency is a cornerstone of all coverage. Unjust language needs to be called out, and outdated norms need to be challenged. Whilst there has been a glimmer of light in recent weeks due to our united struggle against COVID-19, history tells us that media coverage is fickle and has a habit of reverting to type. We cannot afford for this to happen.

Michael Noone is a content writer for the Immigration Advice Service, an organisation of immigration lawyers that provide legal aid to asylum seekers.