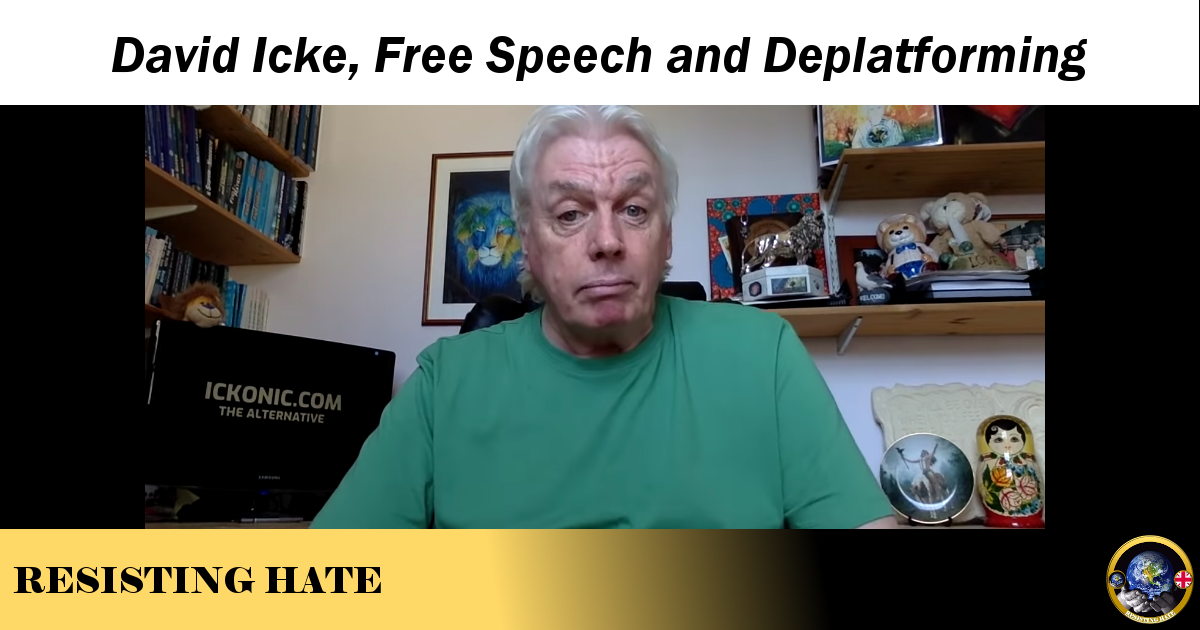 The removal of voices from prominent internet platforms never fails to ignite a debate on the topic of free speech. This week the removal of conspiracy theorist David Icke from Facebook and You Tube has raised the question of whether deplatforming by removal from social media contravenes freedom of speech or whether, given the nature of the content, removal is necessary.

Icke is anti-Semitic but the reason for his removal was not associated with his Antisemitism or Holocaust Denial, it was linked to the material he was promoting in relation to Coronavirus and particularly the links he was making between Coronavirus and the 5g network.

The bogus information Icke was publishing was considered to be a risk to the public.

As usual the free speech brigade has been out in full force, claiming Icke has been denied his right to speak.

But has he been denied his right to speak? In my opinion he has not. He has been removed from private platforms but this is not the same as denying him the right to express his views.

The analogy would be that you may say whatever you wish in your own home but if you come into mine and say things that offend me I have every right to ask you to leave. This is not censorship.

It is important to remember that You Tube and Facebook are private companies who have the right to decide who they are comfortable hosting on their platforms. So humans may (arguably) have a right to free speech but this does not imply they have the right to a private platform upon which to express those views.

Nobody is removing David Icke’s right to free speech. He simply has no right to a Facebook page or a You Tube channel. Nobody does.

In 1791 Freedom of speech was established in the First Amendment of the United States Constitution. In 1948, the UN recognized free speech as a human right in the International Declaration of Human Rights. Interestingly both these were years before there was even a concept of social media or the possibility for an individual to influence millions of others without even leaving their own home.

When free speech was established the primary platforms for sharing ideas were Speakers Corners (the most notable being Hyde Park in London). The platforms now can reach an audience all over the world. With that level of audience should come a degree of responsibility. If people cannot use the privilege of an amplified voice responsibly (and by responsibly I mean by not putting inaccurate medical information online) then it is my view that they should be denied the platform.

Icke still has the right to his voice. He can write articles and send them for publication. He can host (virtual) meetings and events. After lockdown he can even go and stand in Speakers Corner at Hyde Park to share his thoughts. Nobody has taken away his right to free speech.

In many cases a social media reach is disproportionate to the quality of material being published and linked to the financial ability a user has to promote their material. We saw this with both Tommy Robinson and Britain First who dropped from millions of followers on platforms where content could be sponsored and followers paid for to fewer than 30,000 followers on platforms without a paid reach. When Icke and Robinson and their ilk cry about freedom of speech, what they are really mourning is a platform where they can use their wealth to manipulate huge levels of follower interactions. I would argue that social media providers have a genuine responsibility not to allow this to happen in cases where the material potentially could have a detrimental effect on a large number of people.

It is argued that ‘words do not cause harm’ and that individuals have a right to access all views in order to reach a balanced conclusion. Again I disagree with this.

Words do cause harm in a society where a great many are incapable of critical thinking. Ironically Icke himself provides a great example of the nonsense the public can be persuaded to believe. Time magazine publishes:

If people are seriously willing to listen to a man who believes key political and royal figures are actually reptilian aliens in disguise then for their own good they should not be exposed to incorrect information on the coronavirus. People who will believe anything are at genuine risk of following bad advice and putting themselves and their families in danger.

Words do cause harm when those exposed to them cannot be trusted to have the intelligence to differentiate between conspiracy theorist nonsense and factually accurate medical advice that they should be following.

Interestingly the attention seeking Katie Hopkins (who will jump on any bandwagon that offers her publicity makes a similar point).

She of course means to be provocative but she is actually right. People cannot always be trusted to think for themselves. Many can of course but as long as we have people willing to believe in reptilian aliens and pizza parlours who traffick children for high ranking politicians then there is a social responsibility on the owners of social media to limit or suspend accounts who pay for a massive reach with the sole intention of building a platform to spread lies and misinformation.

The supporters of free speech on Twitter argue that Icke should be debated rather than deplatformed.

No he should not be debated. When we debate an idea we give it a credibility. This is why so many of the far right Nazi groups run round asking to ‘debate muh views’. Some ideas are simply not worth the time or effort to debate. Some ideas really are just utter twaddle and should be consigned to the scrap bin of history. 99% of the rubbish David Icke posts falls into this category.