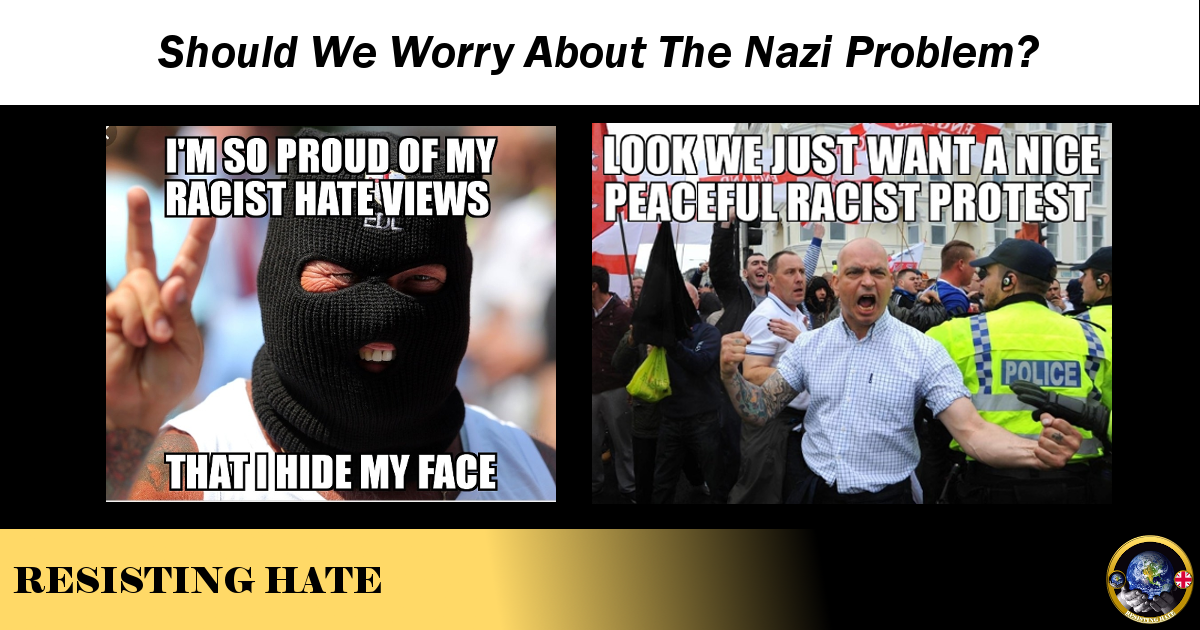 Surely Nazis are a thing of the past?

Up until about ten years ago they were. The Neo Nazi skinheads of the 1980s had little to do with the jackboot wearing fascists behind the Holocaust. Neo Nazism was really just a synonym for thuggery and racism. But in the last few years we have started to see the rise of a movement that identifies itself as National Socialist and who share the same anti-Semitic hate and ignorance as Hitler’s party of the 1940s.

The actual Nazi party is long since dissolved of course and those idiots using its name today have no affiliation. But the rhetoric they employ and the tactics they use are designed to emulate the Nazis. And it is important to understand that modern Nazis are suit wearing pseudo intellectuals who avoid breaking the law and attempt to promote a ‘professional’ family orientated wholesome image.

Harder to spot, harder to take down. But just as much the haters as they ever were.

Are these modern Nazis serious about supporting Hitler or are they just idiots?

Some are serious, some aren’t. They are pretty much all idiots though. It is hard to take anybody seriously who admires one of the biggest failures of the Twentieth century. Hitler was both a failure and a coward. But yes, there is still admiration for him in Nazi circles. The symbols of his age are worn, including the deeply offensive swastikas and the Sonnenrad (black sun). Copies of Mein Kamp (usually in pdf format) are passed around Facebook and Telegram in the hope that someone will be able to get through the yawn fest.

What do they want to achieve?

Modern Nazis talk about the ‘ethnostate’. This is an extreme form of nationalism where countries are segregated on racial lines. Their argument is that Japan is for the Japanese, Israel is for the Jews, Africa is for black people and England and America are for white people.

It is a foolish argument because it overlooks the fact that both Britain and the US have very diverse communities and have grown prosperous through immigration and the importing of different ideas, skills and values. It is nonsensical to tell a born Brit that he cannot consider himself British because he happens to have black skin.  It is also extremely racist.

One group – Patriotic Alternative – who keep getting knocked back when they apply to be a political party have suggested every non white person in the country be given £15k to leave it.

I showed them why their economics are nonsense in this article – Roanna Carleton Taylor teaches the fash about economics. They failed to understand it!

The primary prejudice of modern Nazis remains the Jewish people. Most of their hate is directed toward harassing and vilifying Jews.

Why do they hate Jews so much?

I think this depends on whether modern Nazis believe their own lies or not. They convince one another and themselves that the Jews have exceptional power and financial success which they have achieved through the displacement of other community groups. Obviously this is based on outdated stereotypes and tropes which anyone who has the ability to think critically would see as the vile antisemitism that it is.

There is also a resentment that many Jews settled in Israel at the end of the second world war. Modern Nazis use this as an argument to promote the concept of an all white ethnostate. They forget that the Jewish homeland came about as a direct result of the Holocaust in which six million innocent Jewish people were murdered in cold blood by Hitler’s Nazis. The Jews needed a homeland because they were persecuted throughout Europe. White Brits do not need a ‘homeland’ as they are not being persecuted by anyone.

It is interesting to note that the Nazis sometimes pretend to be supporters of Palestine in an attempt to strengthen their anti Israel arguments. This is just plain rubbish. Resisting Hate monitor the Nazi channels and there is just as much hate for Muslims as there is for Jews. Important not to be fooled by these divisive anti-Semites. They care about nobody except the ‘aryans’ (Yes they actually have started using that word again).

How are they spreading their views and beliefs?

Mostly through social media. Opposing Nazis is easier than opposing most other hate groups as their key symbols are widely recognised as hate symbols. Even posting a swastika on Facebook can result in a ban.  The primary social media platform for Nazis is currently Telegram. However after some of the larger channels (ncluding Terrorwave Refined) have recently been removed it is unlikely that they will be safe on Telegram for much longer.

In addition to the video platform ‘Bitchute’, Nazis have also started streaming on gaming platform DLive. This is not likely to last long as DLive have a robust anti hate policy and are very open to being sent video clips of accounts that have broken their Terms of Service.

A lot of the serious Nazi groups are based outside the UK. The most high profile group in the UK was proscribed group National Action. After co founder Jack Renshaw was imprisoned for terrorism and a number of members also received prison sentences the group largely disbanded with smaller groups emerging under different banners with different identities.

Patriotic Alternative have political aspirations but so far have failed to do more than show a banner saying “White lives matter” to a bunch of sheep on a Derbyshire hillside. PA is run by Mark Collett, the protégé of racist Nick Griffin who allegedly had links to National Action.

Several minor hate figures such as James Goddard and Vinnie Sullivan have been co-opted into PA after moving away from the Islamophobia focused right wing extremism of Tommy Robinson.

Should we be worried about a second Holocaust?

No. We shouldn’t dismiss the hate on social media but it is important to keep it in perspective too. The majority of people are not anti-Semitic, have no idea that these Nazis even exist and would most certainly not support their nonsense even if they did.

Every time the Nazis get any press it is mockery and ridicule. Case in point was the White lives matter banner. I did a piece on it showing what the response was on Facebook and Twitter. About 95% of the people who commented thought Mark Collett, Laura Towler and co were just a bunch of racist prats on a hill.

We do need to learn the lessons from history and as the Holocaust fades from living memory then it is always a concern that it will not resonate as much with younger people who don’t remember their relatives who survived it. But we have to trust in the fact that one of the worst atrocities in humankind has left an indelible mark on our public conscience. I believe that when people say Never Again, they mean it.