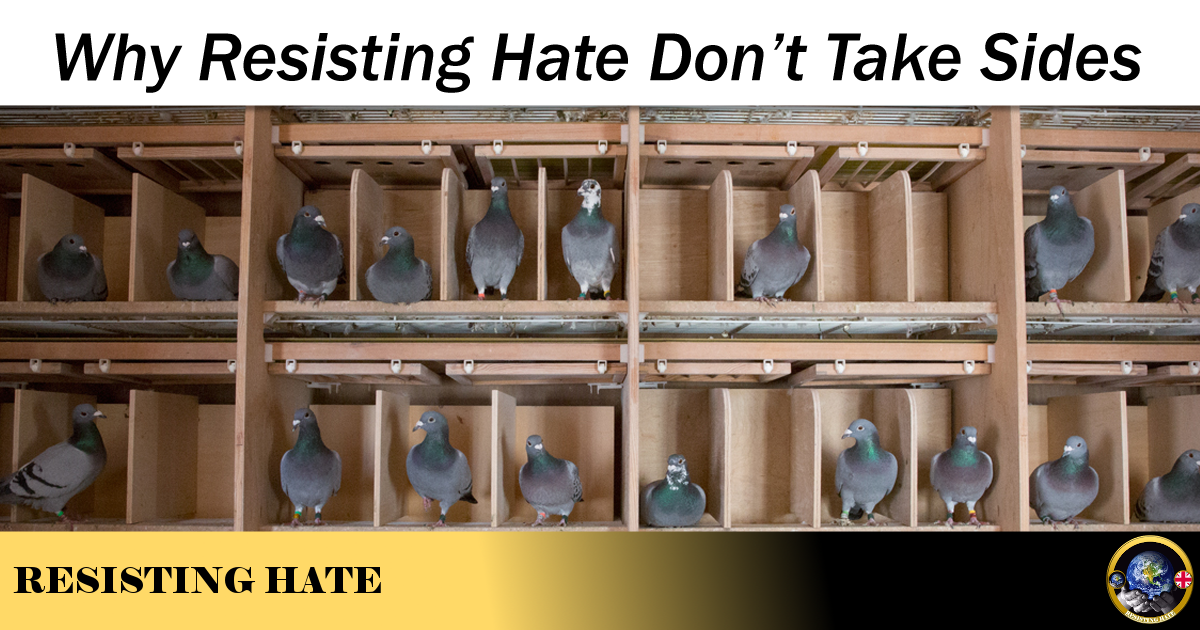 Quite a lot of things frustrate me about running an anti hate group – the venomous people we interact with day in day out, the pitiful logic employed by the far right and the inability of racists to express themselves beyond memes and the block button to name just a few. However, nothing frustrates me more than the view that fighting hate has to be about taking sides and the implication that defending one group automatically assumes the attacking of another.

I’ll give some examples encountered over the last year. We tackled a known Holocaust denier about her (academically indefensible) position relating to the Holocaust. We defended the right of the families of the survivors to not have the memory of their ancestors mocked and we pointed out that Holocaust denial is fundamentally Anti Semitic. She decided we were hardline Zionists and accused us of wanting to support Israel to wipe out the Middle East.

We spoke out against the hash tag #makeasongIslamic pointing out that it fuelled tensions between communities and reduced practitioners of Islam to stereotypes. The response to this was that we must be Muslims and were likely supporters of a terrorist agenda.

We spoke up for the plight of the Syrian refugees and the humanitarian crisis in Syria and beyond. We were told that sympathy for the Syrians meant we must be anti British, traitors to our own country, supporters of ISIS and undoubtedly homophobic as we “support a regime that kills gays.”

One of our group spoke about our belief that followers of Islam should not be persecuted because of their faith. The response to this was a demand as to why he “hates Christians”. When he replied that he did in fact not hate Christians at all he just accepted that different people find different paths to God he was told he had to pick a side as “Muslims want Christians killed.”

We opposed the rabidly Islamophobic group Bluehand and challenged their extremist hate views on Palestinians. We were told this made us Anti Semitic and haters of Israel.

We spoke out against the French ban on the burkini and defended the rights of women to wear whatever they feel most comfortable and appropriate for their individual needs. We were told this meant we support “oppression toward women” and were publicly promoting sexism.

The truth of course is that Resisting Hate are not in anyway Anti Semitic, Islamophobic, homophobic, sexist or any other ‘ism’ that have been slung our way. We categorically oppose all forms of hate and discrimination and reject any attempt whatsoever to cause divisions between people.

These attempts to pigeon hole us are saddening because they offers a glimpse of the polarised world some people must live in. A world that hasn’t progressed from the concept of “If you are not with me, you must be against me.” A world in which everybody who thinks differently is the enemy.

We have come across many self proclaimed fighters of hate who stand on their soap box and preach tolerance but who when it comes down to it are simply using their support of one culture to fuel hate toward another. This is not what anti hate is about. You cannot go out into the world and fight hate effectively if you harbour it within your own heart.

Those pushing the idea that our group must have a secret hate agenda are spectacularly missing the point of what we are about.  At Resisting Hate we do not believe we have to take sides and denigrate one community to support the rights of another. In fact we believe the total opposite. We believe that the only way to achieve peace and unity in the world is to find a way for all races, faiths, cultures and belief systems to integrate and work together. If we ever did decide to promote one culture at the expense of another we would be acting totally against the integrity of our ethos which is to see all human beings as equal and equally worthy of respect.