As, despite all his efforts, Bond from Bluehand still remains largely unknown it seems apposite for our group to introduce the growing Resisting Hate membership to the man whose online hate speech inspired Resisting Hate to form in the first place.

Having checked the libel laws it seems fairly safe to express an opinion on a pseudonym. And in this case it is particularly safe because in order to sue Resisting Hate for libel Bond would have to reveal his real identity and this is an individual who has spent his entire online existence trying to hide the face of the man behind the mask.

We don’t have Bond’s real life identity (though we know people who do) and have to be honest that even if we did have those details I’m not so sure we’d publish them. As long as Bond remains that anonymous figure lurking in the murky shadows of online hate and fascism his credibility as a leader is significantly diminished. It is hard to take seriously the views of a man who isn’t even brave enough to put his own name and face to them.

Bond runs the hate group Bluehand. This sells itself as being a group that promotes free speech and fights political correctness but is actually an Islamophobic hate group. A quick glance at the time line of @bluehand007 (Bond’s Twitter handle) will confirm this. 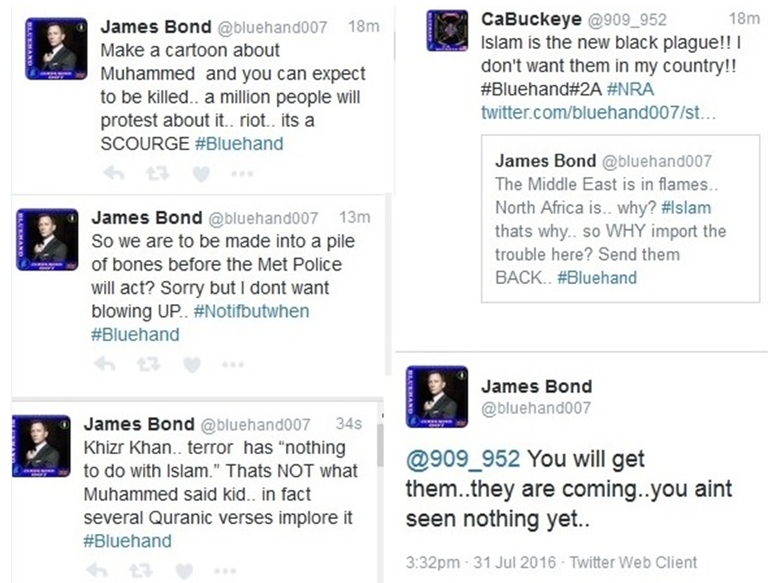 Unfortunately Bond’s anti social agenda doesn’t stop with Islam. There is also plenty of evidence of him posting tweets offensive to other races, cultures and religions. 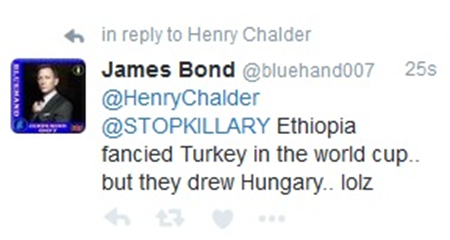 Bond first came to the attention of online anti fascist groups with his membership of the website Praetorians. The site has been locked now (to prevent members of the public from reading the racist content) but this screenshot of the front page gives a good indication what the published content related to. Even back in 2006 Bond was starting to obsess about Muslims.

Bond has an extremely selective eye when denying the accusation that his so called Bluehand Family members (Charles Manson overtones?) incite hate. These are some of his members – all wearing the official avatar that only he authorises – expressing the kind of sentiments Bond feels it appropriate for his group to make. 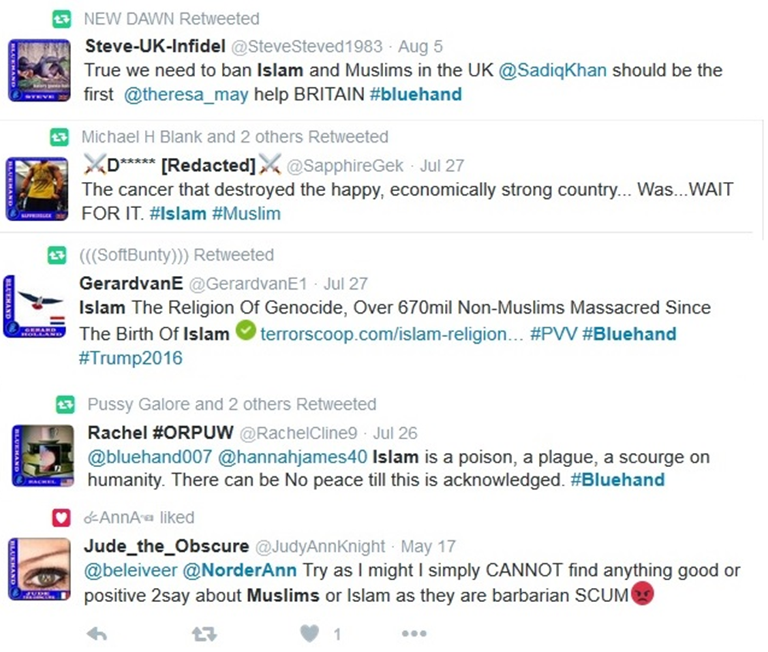 Bond views all the people who oppose him as “trolls” and instead of welcoming debate in the manner of the free speech he so hypocritically pretends to promote he blocks anybody who openly disagrees with his views. He attempts to discredit Resisting Hate by suggesting we are the paid “trolls” of other more established anti hate groups or more recently has made the outlandish claim we are on the payroll of Twitter itself. (This is factually untrue, Resisting Hate are fully independent and self financing).

One of Bond’s small number of real members (the rest being sock puppets he makes and tweets with to make his group look popular) runs his block list which is now at over 4000 members. This dedication to the Bluehand echo chamber sums up his attitude to free speech perfectly.

Despite claiming to be an “International” group with nearly 10,000 members Bond has very little online presence beyond Twitter. He has no Facebook group, no other social media accounts and his website forum has less than 40 members (or it did last time I infiltrated it – which Resisting Hate do on a regular basis as it is laughably easy to convince Bond that a mole is a genuine member.)

This is Bond trying to reassure his unsuspecting (and rather dim membership) that his forum is safe to use. (It wasn’t – only a week later we infiltrated it and posted screenshots all over Twitter as usual.)

Resisting Hate have moles in the majority of Bond’s undercover Direct Message groups where the private content is even more revolting than the stuff they post on their hashtag. Unbeknown to Bluehand we take regular screen shots of the DM activity and have the real life identities of many of his unsuspecting members who often give themselves away in chat.

To make a comparison between Bluehand and ourselves – as one of the primary founders of Resisting Hate I am happy to put my real identity to the beliefs I hold. I am happy to be public, to be photographed, to be associated with like minded individuals and groups and to be open both on social media and in the wider community about the views I share with the other members of my anti hate group.

My challenge to you Bond is are you willing to do the same? Are you willing to stand up and show your members you are prepared to publicly back the hate, Islamophobia and racism you take such pride in posting behind the safety of a pseudonym. Will you lend your name to your cause or will you continue with the views I know you are secretly ashamed of and remain – hiding in the shadows forever– the anonymous Mr Bond?