Resisting Hate first came across the notorious Anti Semite Alison Chabloz in 2015. Like many anti hate groups we have felt it prudent to keep an eye on a woman who seems so relentlessly determined to slander the memory of the millions of innocents slaughtered by the Nazis in the Second World War.

For Ms Chabloz is a Holocaust denier. Not in the academic sense – which is a futile position anyway given the hard evidence that the Holocaust (including the gas chambers Ms Chabloz) took place – but she is a denier in the Jew hating, delighting in causing as much public offence and misery as possible sense. 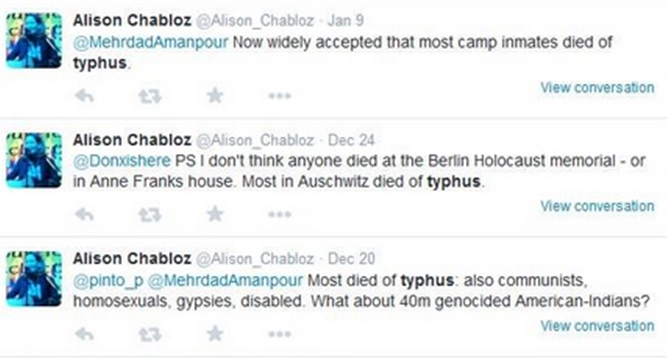 Ms Chabloz was currently suspended yet again after @ajctmusic and @alichabz and her previous accounts @alison_chabloz , @alisonchabloz, @GotABonetoPick and @elixr13 were suspended for hate crime.

Chabloz hit the headlines (and our inbox) with a rather weak attempt at attention seeking during the Edinburgh fringe festival in August 2015. She is pictured here performing the “quenelle” which she (predictably) denies is an Anti Semitic gesture but which is agreed by pretty much everybody else (Including the French government who want it banned) as being a deliberate symbol of hatred against the Jewish people. 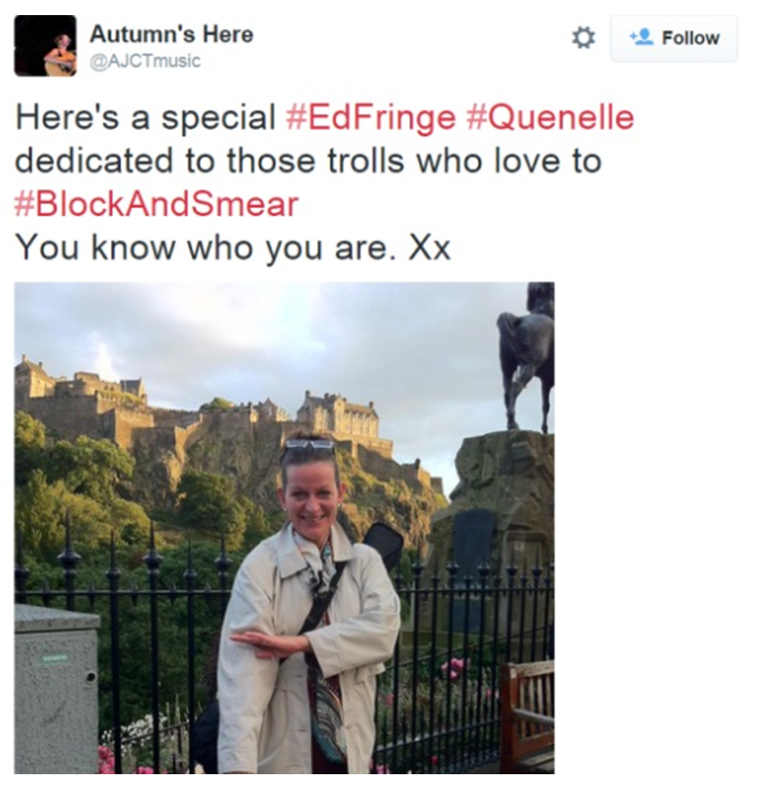 We took a look at some of the accounts she follows on Twitter. Interesting friends for a woman who consistently tries to deny the fact she is Anti Semitic.

Alongside her ever growing attempt to demonise Jews Ms Chabloz likes to cosy up to pro Islam accounts. (Would suggest you leave Mr Ansar alone Alison, your increasingly bunny boiling tweets in the form of serenading him are probably scaring the poor little man to death).

Normally we would be all in favour of somebody displaying an interest in diversity but Ms Chabloz is not interested in diversity she is interested in disunity. Perpetuating the idea that a person cannot be tolerant of both the Jewish and the Islamic faith is a radical fallacy that does nothing to support the common ground and mutual peace between the two religions. This “taking a side” position is both naïve and dangerous. At Resisting Hate we totally repudiate the idea that in order to promote tolerance of the Islamic faith it is necessary to disparage the Jewish faith. Diversity is about respect and mutual coexistence. Such playschool tactics you choose to adopt Ms Chabloz…

The idea of taking sides though is actually a carefully orchestrated and hypocritical lie for Ms Chabloz. Because while she was doing her best to manipulate members of the Islamic community to support her vitriol against the Jews she was actually stabbing them in the back at the same time. As our regular readers will know Resisting Hate follow the actions of Bluehand very closely and we were not at all surprised to find the (somewhat desperate for followers) leader of Bluehand @Bluehand007 welcoming Ms Chabloz as a new member.

Bond’s other Old Bluehand members were equally glad to embrace the self styled “supporter of Muslims” into their intensely Islamophobic hate group.

And in case she denies it is her…

This inviting of Ms Chabloz to Bluehand provides yet another clear link between Bluehand and Anti Semitism. It also proves Ms Chabloz is not the freedom fighter she likes to pretend she is but is in fact a woman committed to the general principle of anti religious hate. She could not have publicly damaged herself more than by joining one of the most radically far right Islamophobic hate groups on the internet.

This are the other accounts Ms Chabloz  follows on her current Twitter account. Hidden among her anti Jewish tweets are several accounts with a similar hatred toward Islam. This further supports our belief that for Ms Chabloz her alleged support for Islam is no more than a front to hide her agenda of fuelling a discord in Muslim/Jew relations.

We gave Alison the courtesy of letting her know we intended to write an article about her and her link with Bluehand and she replied with the tweet below. Judging by the arbitrary reference to a monkey it looks very much that in addition to her Anti Semitism and Islamophobia she is a racist as well. 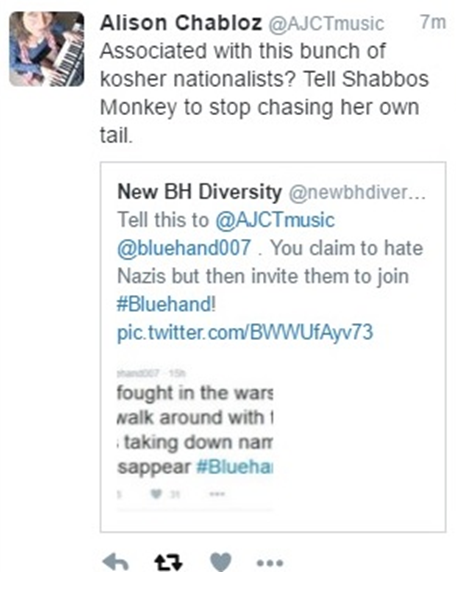 So in answer to the question posed to her below:

it looks very much like the answer is that Ms Chabloz is equally as antagonistic toward Muslims as she is toward Jews. She is willing to bed (metaphorically, please don’t panic Mr Ansar) with Muslims when she is attempting to use them as a means to an end to push her personal agenda of anti religious hatred but dig a bit deeper as we have and her true nature is soon revealed.

On 25 May 2018 Alison Chabloz was convicted of posting grossly offensive material to You Tube.

On 14 June Alison was sentenced to a 20 week prison sentence, suspended for 2 years, and a ban on social media for 12 months.