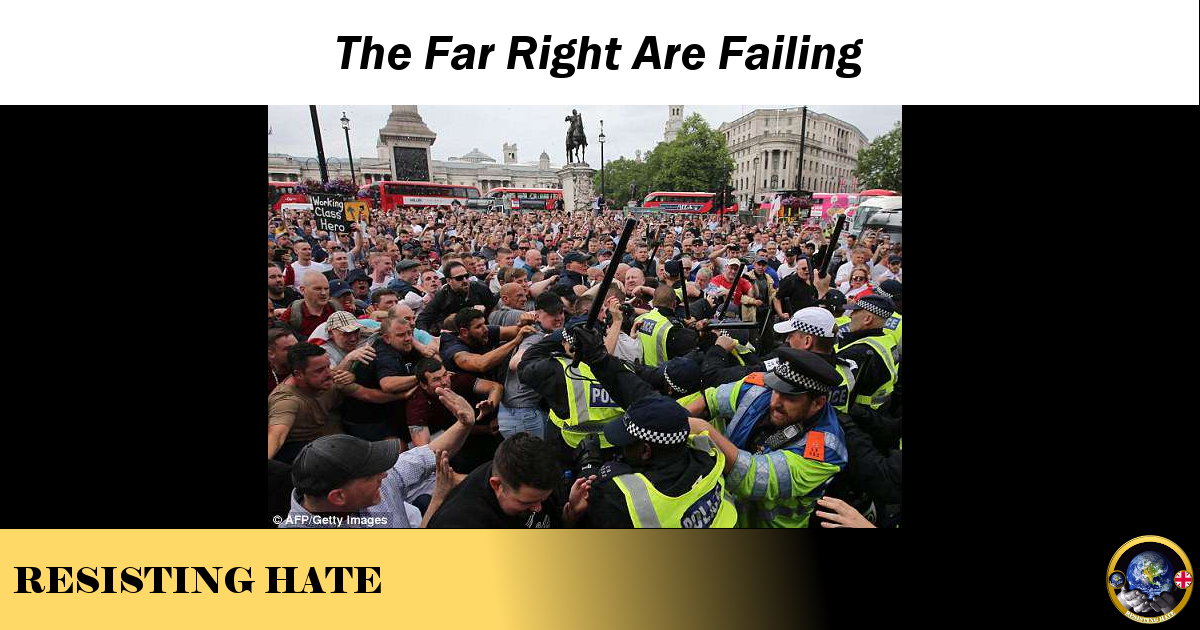 It is a common misconception expressed by the mainstream press that the far right are rising in Britain.  However, laudable as it is to see the threat of fascism taken seriously, the truth is actually not as bleak as the papers would have us believe.

It is important to differentiate clearly between the right wing and the far right. The papers are certainly correct that the right wing and populism are on the rise. One only has to look at the nationalistic rhetoric in the wake of Brexit or the support for the policies of a Boris Johnson led cabinet to understand that a C/conservative agenda still has a lot of backing in the UK.

But the Conservative voter base, in the main, is not far right. The definition of far right that we would use in Resisting Hate involves xenophobia, racism and irrational prejudice toward others based on sexuality, race, religion, gender or other defining characteristic.

Simply put, your Gran who supports Brexit and thinks Boris Johnson is good for the country is definitely right wing but she isn’t far right.

The real far right, the bigots and racists are actually struggling to get engagement for their hate groups.

A couple of months ago Resisting Hate launched the Telegram project. Numerous accounts  including myself went undercover into far right chat groups and infiltrated the groups to get a handle on the numbers involved in far right propaganda and the direction the ‘movement’ intended to take.

The reason we chose Telegram was because the key figures on the far right are steadily being deplatformed from primary platforms. Resisting Hate were responsible for getting Tommy Robinson off Twitter. He was then removed from Facebook, Instagram and PayPal. Britain First lost a million followers on Facebook. Both Twitter and PayPal have removed the main accounts of the For Britain party.

Initially as high profile far right accounts started to be deplatformed, the extremists moved to Gab.com but as that platform became increasingly popular with the American Neo Nazi youth (who basically just spam everything with memes of Pepe the frog). Telegram, which has similar group functionality to WhatsApp became the social media of choice for fascists.

There are a few other minor social media platforms such as Minds, Parlor and Mewe but few people have ever even heard of them. They are certainly not fertile ground for far right mass recruitment!

Telegram is composed of ‘chats’ and channels. Chats work in a similar way to WhatsApp groups. People can join or be added by a group admin and they can operate either as a public group or as a private invite only discussion. Usually all members are able to participate. Channels are public in a similar manner to a Facebook wall but can only be updated by admin.

Far right Telegram is essentially made up of around 40 primary public group chats ranging from under a thousand people to the largest of around five thousand people.  There are also a similar number of key far right channels with the people you would expect to have a presence updating regularly (Tommy Robinson, Danny Tommo, Avi Yemini etc.).

It is interesting to notice that it is the same people in most of the chats. There is a massive amount of duplication. From my observations I estimate there are only around 10k active far right UK accounts contributing to the general discussion. A percentage of that number will certainly be down to the duplicate accounts that they all seem to run. A further percentage will be made up of infiltrating accounts who are simply there to observe the madness.

There is a sub layer of chats on Telegram which are primarily made up of American Nazi youth. These have very little cross over with the UK far right. There is also a European fascist network which again has very little cross over and which seems to be much better organised and more focused than the UK. The Resisting Hate focus was very much on the far right as opposed to the hard core Neo Nazi channels simply because the Nazis are actively monitored by the police so infiltration by anti hate groups is unnecessary.

Most of the content on Telegram is generated by the channels. The largest UK far right channel is Tommy Robinson News which has around 50,000 subscribers. However it is crucial to note that this is less than 5% of the following Robinson had on either Facebook or Twitter before being banned. It is far harder to purchase likes or subscribers on Telegram so here we see a much more accurate reflection of Robinson’s support. (Support incidentally which is dwindling as the numbers on the primary Tommy channel are dropping every week.). Most of the other channels struggle to break the 2000 subscribers barrier.

After several weeks watching Telegram I saw very little to suggest there was any cohesion or planning to what the fast optimistically refer to as ‘the movement’. Far right Telegram is mainly infighting, doxing, posting memes, sharing news content and making offensive comments about Muslims, Jews and the left. I summarised it on a thread on Twitter:

It amused me to notice that not only do the papers mistakenly think the far right is on the rise, the fash actually believe it themselves. There are numerous posts questioning why such small numbers turn out to attend rallys and demos. They cry for a civil war but they can’t muster enough people to close a shopping centre! They genuinely can’t work out why their online presence doesn’t translate into boots on the street.

The reason the far right are not on the rise is because they are nothing but a small number of extremist idiots, mostly who don’t work, huddled together on a small echo chamber of a platform drearily regurgitating the same tired content, having the same internal arguments and believing memes are a substitute for reasoned argument.

They can’t show their faces because society shuns people with extremist values. They can’t attract a wider audience because the main social media channels have banned them. They can’t generate funding as PayPal and You Tube have wised up to people making money off generating hatred toward others. All they can do is sit in Telegram chats, spout about how much they hate Muslims and Jews and tell each other how much better the country would be if it was run by people like them.

2 thoughts on “The Far Right Are Failing”