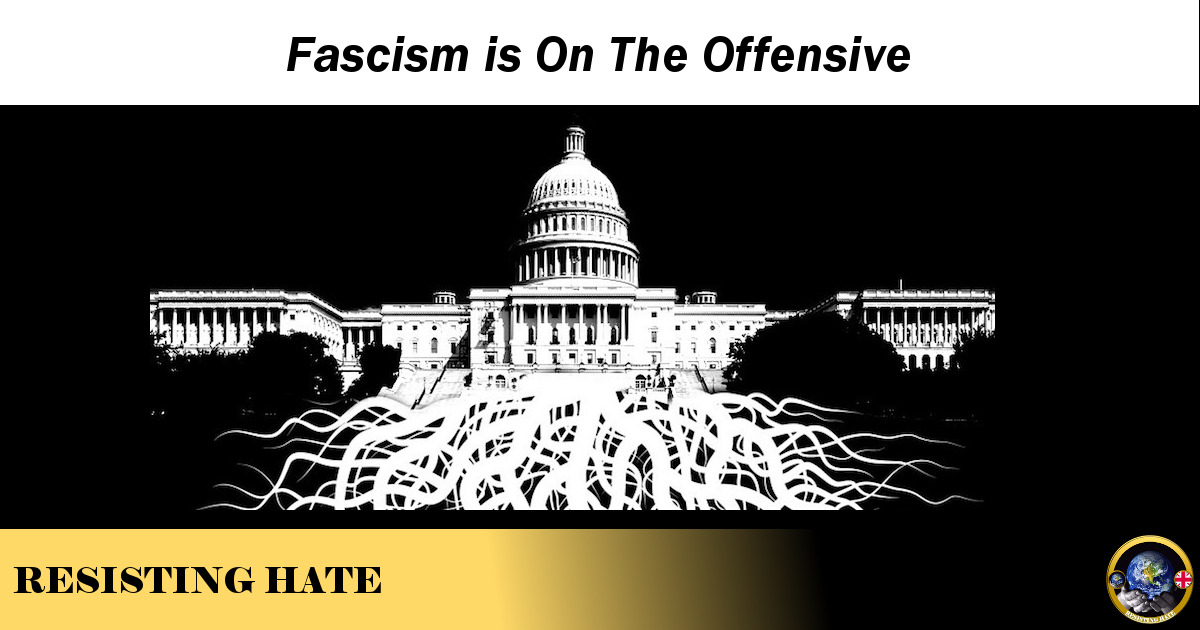 I want to respond to Roanna’s recent article which exposes how “The Far Right Are Failing”.

The article lifted the lid on the activities of the extreme right on social media and charted how, through the admirable tenacity and resourcefulness of those active in Resisting Hate, far right social media accounts have been identified and taken down as the social menace they are. The article goes on to describe how Resisting Hate have recently followed their quarry into the rabbit hole of “Telegram” social media groupings and how doing so has enabled the continual exposure of the warped, hateful ideology of often semi-literate, barely-educated violent barbarians that populate these fascist echo chambers.

Roanna’s article was a great read: full of encouraging detail which shows how RH have the fascists on the run on social media – so much so that in their own groups they struggle to foster engagement and discussion. This is evidenced by identical comments posted into the different groups by the same accounts. I have nothing but admiration for the achievements of RH and if you haven’t already done so I encourage you to read the article: https://resistinghate.org/the-far-right-are-failing/

I was particularly impressed with Roanna’s observation that that the reason the fash were so angry with Resisting Hate’s ability to infiltrate their groups was not that they were worried their plans and secrets would be exposed, but rather, that people would realise they have no plans. Exposed, marginalised and on the run, overt fascism has no game plan. That said, I want to take issue with the main premise of the article, that the Far Right are failing.

To those like myself who have watched with admiration the activities of RH in recent years, it goes without saying that where fascism is active locally, there will by no means be complacency in dealing with it head-on. And whilst obvious and clear evidence there certainly is that overt race-haters are essentially marginalised and their voices curtailed, I want to offer some reflections on why it is perhaps just as important that we recognise in the national political tone, an encroaching fascism in the mainstream.

Roanna rightly encourages us to distinguish right from far-right perspectives and rightly argues that the Conservative voter-base is, in the main, not far right. And she reminds us that “Granny” who supports Bozo Johnson is not a fascist simply because she voted for Brexit. But it is with the definition of fascism offered that I have difficulty – not because it doesn’t accurately describe what fascists do, but because I’m not sure it adequately conveys the character of fascism. And it is to this character that I want to now turn.

Before beginning this article I googled definitions of “far right” and “hard right”. The far right, google informed me are:

“the extreme right wing of a political party or group.”

“Hard-right” on the other hand is:

“those members of a right wing political group who have the most extreme political beliefs.”

This is the problem with definitions. Particularly when dealing with abstractions, definitions are usually crude simplifications that tell us more about the preconceptions of the people constructing the definition than they do about the abstraction itself. And this is why, when it comes to fascism, I would suggest we can go to no better source than Umberto Eco’s “Ur Fascism” (“Eternal Fascism”).

What Eco offers is not a definition of what fascism is but rather a portrait of Fascism perhaps best understood as a constant, pre-existing cultural current – a set of feelings rather than ideas, which gain in clarity and power when the social fabric is conducive to its cultivation.

Eco sees fascism as inherent in the veneration of a series of ideas or abstractions in which for each, a certain cult or system of crude, often unrelated beliefs are loosely attached, held together by the “glue” of devotion.

Whilst clear to distinguish Nazism, which in history was unique, Eco shows how each expression of fascism is related to the existence of some pre-existing cult – or indeed, an amalgam of related cults. And it is in the nature of such cults that we can discern the character of fascism, albeit often in pre-existent forms. That is, as potentially fascist.

For example, Eco identifies one Fascist cult as a cult of Optimism and that of Sacrificial heroism which finds its most heinous expression in the Nazi “Triumph of the Will”.

I would suggest that a similar cult-like tone, if you will, is adopted as part of the Brexit campaign in which the public has been exhorted to admire Boris Johnson’s heady optimism about leaving on 31st October “no matter what” and his “heroic” (and sadly false) determination that instead of failure in this he would “rather die in a ditch”.

I’m aware the reader is unlikely to be convinced by this crude comparison. Nevertheless, the comparison is there to be made. The abiding distinction between “The Triumph of the Will” and Boris Johnson “Dead in a ditch”, I would venture to suggest, is that whilst the former has desperately tragic and profound associations, nobody ever took Boris Johnson seriously enough to imagine this as a realistic outcome. Nevertheless, it is not with the outcome that we should be concerned, but with the tone and with the character of the feeling inculcated.

The most significant problem with identifying Fascism according to Eco is that Fascism is not the expression of any  coherent set of ideas or principles. Rather, it is characterised by political and ideological contradictions. It is a Kaleidoscope of interrelated ideas, a “structured confusion”, driven not be reason but by feeling.

And whilst for Eco Fascism, is “philosophically out of joint” it is nevertheless “firmly fastened to archetypal foundations”. It is in short, rooted in mythology. And to identify the quality and potentiality of fascism in any given culture, it is with the nature of this mythology, as expressed by cults, that we should concern ourselves.

We have already touched upon the cult of optimism and of sacrificial heroism in relation to Brexit. One of the most easily recognisable Fascist cults is: The cult of tradition

Consider how Brexit has been presented as offering the nation the prospect of a renaissance, a literal re-birth. Britain, the argument went, was once a “great nation” and freed from the enslaving chains of European bureaucracy – unelected and anathema to our “values”  (ask the Fascist what they are and you’ll get no coherent answer). But Britain can once again become that great nation: freed from bondage we can strive independently free, confident, heroic once more on the world stage.

If present culture and ideas are to be rejected in favour of a mythologised past comprehended  not cerebrally, as part of an aspiration to critically appraise what that past look like, but viscerally- with the gut, then it is with the irrational that we should be concerned.

Because it is the job of the intellectual to give pause for thought the Fascist must attack the intellectual in order to champion “action for the sake of action”. For the Fascist, thinking becomes a form of emasculation. It is the preserve of the “snowflake” requiring a “safe space”.

Disagreement in democracy is encouraged as a sign of diversity and reflected in healthy debate. For the Fascist, disagreement becomes “treason” – a word which in recent years has entered the mainstream lexicon like no time in most people’s lifetime.

Before Steve Bannon engineered the Trump ascendency he worked for Breitbart, the far-right social media network. The stated purpose of Brietbart at that time was to “sew confusion”. Because, Bannon has said, when people are confused, intellectually, emotionally, they can be nudged, the social fabric becomes fluid. And when this happens, radical change is possible.

Confusion is the conduit through which Fascist cults have entered the mainstream and the lexicon of ideas and tropes of the Fascist has attached itself to mainstream narratives. And if confusion has been the conduit, economic crisis, social and political disenfranchisement and the frustration of hopelessness and alienated groups consequent to the collapse of 2008 and the conscious adoption of austerity, provides a fertile soil in which the unthinking, irrational hate of the “other” can fester.

When faced with disenfranchisement and disaffection, the only privilege for the many becomes the most common: to be born in the Country. And the fear that such privilege may be taken away drives the fascist obsession with plots – international and internal.

For years Islam has been the easiest target because of the Imperialist devastation of the middle east and the consequences of (individual and collective) psychological trauma, that results from ripping to shreds for decades the social and economic fabric in order to be certain of access to fossil-fuels.

But Brexit has provided a new set of conspirators: the Europeans – whose only purpose for the Fascist, is enslavement. Of course, it is never quite clear what the character of such enslavement is or what freedom might look like. This would be anathema to the principle of engaging cerebral responses and with such the myth itself is in danger of unravelling. No, the purpose is driven by tropes  – metaphorical figures of speech or phrases that might mean many things and never quite means anything – a pen picture to by-pass the intellect in order to penetrate the gut and drive a visceral response.

This then is the essence of fascism. And this, increasingly has become the character of our political discourse and our culture. This is what Eco meant when he identified Fascism as Eternal – as Eternally potential, as pre-existing just beneath the surface. And this is why, although far right fascist groups on social media have been routed, still we should be aware of how Fascist modes of feeling are ever present, are vital, pervasive and are now being consciously cultivated by those close to the heart of Government.

The Far Right may be  failing on social media. But the far right is alive and well in the mainstream and is very much on the offensive.