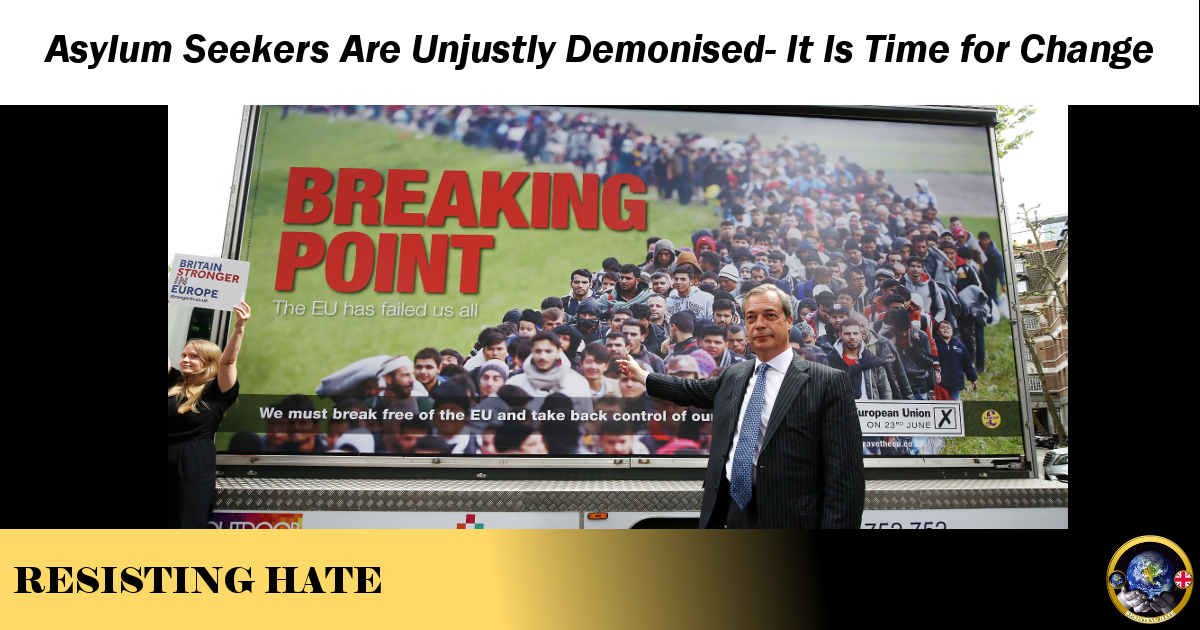 The term ‘asylum seeker’ has negative connotations. Illegality springs to mind; an individual who has unlawfully entered the country, motivated by a desire to take from society and give nothing back in return. Such a perception prevails due to the media’s portrayal of this group. In spite of the immense suffering that causes them to flee their home- and the trauma that is experienced whilst journeying for sanctuary- the members of this vulnerable community are consistently dehumanised, judged and insulted by both government and media.

The notion that asylum seekers enter the country illegally is a falsehood. According to the 1951 Refugee Convention, it is a human right to be able to seek asylum in another country. Various sections of the media frequently stir up the belief that asylum seekers are breaking the law upon arrival in the UK. However, this is an attempt to create a narrative in which members of this community are characterised as deceitful and subversive. In contrast, they are simply exercising their legal right. What is conveniently missing from the narrative is that asylum is being sought in the first place due to a legitimate fear of persecution. There is a prevalent belief that ‘asylum seeker’ is a term used by economic migrants as a way of legitimising their desire to live off the UK benefit system. Yet this totally disrespects the fact that such individuals have suffered unthinkably horrific experiences in their country of origin. Situations encountered prior to migration frequently include the death of loved ones, physical torture and starvation. With this in mind, it is time for the portrayal of asylum seekers as illegal immigrants to come to an end once and for all.

Further to this, an asylum claim can only be made upon arrival in the host country. Therefore, the idea that such individuals endure such perilous journeys- crammed into the back of lorries or clinging onto rafts- in an attempt to avoid detection is a myth that needs dispelling. Asylum seekers are doing what they have to do in order to create a better life for themselves and their families. Their actions are not covert or duplicitous; they have no choice but to reach a place of safety by any means necessary. Claiming asylum once on British soil is the only option they have.

There also a widely-held belief that most forcibly displaced people seek refuge abroad. On the contrary, the UN Office for the Coordination of Humanitarian Affairs stated that at the height of the migrant crisis, there were around 6.6 million internally displaced people within Syria. Notions such as this contribute to the myth that the UK provides sanctuary to vast amounts of asylum seekers. In reality, those seeking asylum make up a tiny proportion of new arrivals in Britain. In the last twelve months, only 32,693 asylum applications were made in the UK. This figure contrasts hugely with Germany, which received 161,900 applications in 2018. France received 114,500 applications in the same year.

Further surrounding them in a tide of antipathy, asylum seekers are frequently depicted as an economic drain on the UK. The current asylum support rate is £37.75 per week, an amount that rises by a paltry £3 for pregnant women. This leaves members of this community with approximately £5 per day to survive on- simply not enough to build a meaningful and comfortable existence for themselves. The level of support British citizens receive is around double this, and unlike other benefits, asylum support has not been increased in line with the cost of living.  With this in mind, the idea that asylum seekers are economically damaging is simply fatuous. The charity Refugee Action interviewed a number of asylum seekers who were surviving on such support. The majority of respondents stated that they struggled to afford essentials such as medicine and clothing. Moreover, the myth that asylum seekers steal British jobs also needs debunking. Work is totally prohibited for the first twelve months, and after this it is restricted to a few highly skilled roles on the Shortage Occupation List.

Asylum seekers have been demonised for too long. It is time for the truth.

Cameron Boyle is a political correspondent for the Immigration Advice Service, an organisation of immigration solicitors that offers full and free legal support for asylum-seekers coming to the UK.