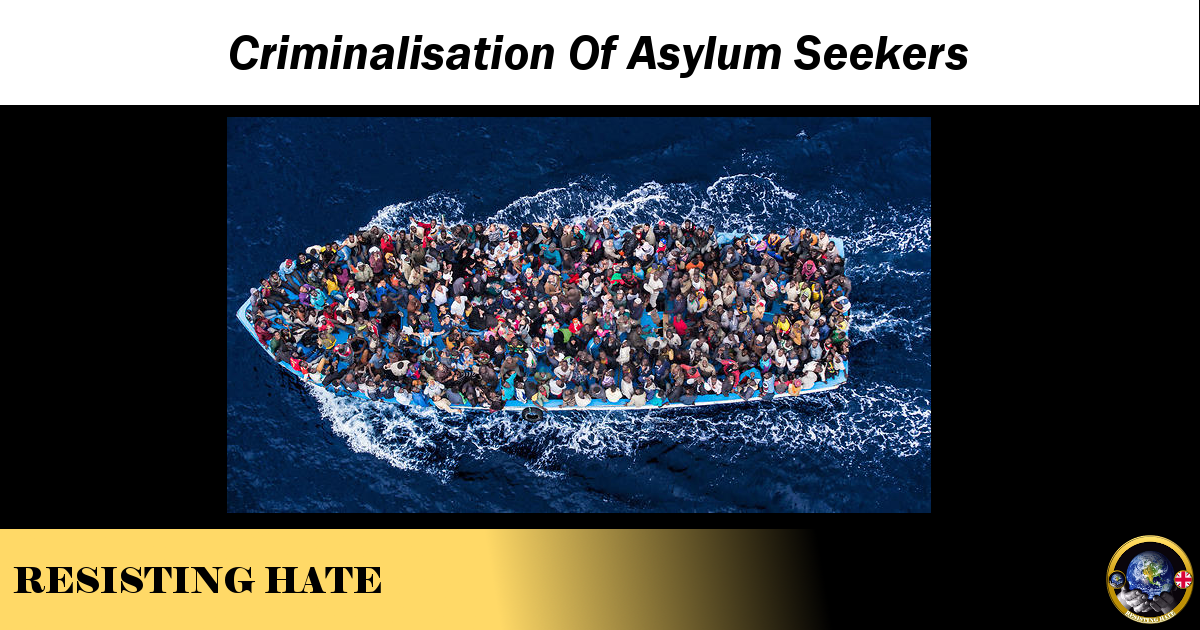 Currently in the Western world, we are seeing an increasingly hostile climate to asylum seekers. The rebranding of the Refugee Crisis as the ‘Migrant Crisis’ by Conservatives and the far-right has increased xenophobia among the continent. Using the term ‘migrant’ instead of ‘refugee’ or ‘asylum seeker’ intentionally misrepresents their arrival to the UK as a choice while at the same time absolving Western nations of their role in displacement. Western foreign policy, from interventions in Libya, Iraq and Syria combined with civil wars in the region, has played its part in creating the biggest global refuge crisis since the Second World War. Many flee for their lives and often die in dangerous sea crossings, particularly in the Mediterranean. The UK has been one of the nation’s legally and culturally framing these asylum seekers as criminals and as such has become one of the worst places to seek asylum in Western Europe.

The right to seek asylum is set out in the Universal Declaration on Human Rights which the UN subscribe to and is a key obligation in international law. A person fleeing to the UK while escaping persecution has the right to seek asylum but will only be granted refugee status if they can show that: they can’t rely on their country’s government to protect them, the persecution is based on their race, religion, nationality or membership of a political group, they have a well-founded fear of this persecution, and they are outside their own country.

UK asylum policy specifically outlines that those claiming asylum must do so within the UK or at its border, which often helps contribute to the stereotype that asylum seekers are trying to enter the country illegally. In the event that those seeking refuge do not claim asylum immediately, the Home Office often exploits this to discredit their claim, suggesting that they cannot be in real danger.

The government has long pursued immigration policies which attempt to deter individuals seeking asylum in the UK. In 2012, for example, the government introduced the ‘hostile environment’ policy in an attempt to make the UK as unwelcoming and difficult as possible for those seeking asylum. While the ‘hostile environment’ policy is no longer technically in effect, its impact can still be seen; whether it’s the monitoring of asylum seekers through their credit card use, the pitiful weekly allowance of £37.75 or the incessant depiction of asylum seekers as a strain on public services.

In 2014, Theresa May as Home Secretary sought a ‘Deport First, Appeal Later’ scheme (later deemed unlawful). It was an amendment to the 2002 Nationality, Immigration and Asylum Act with the aim of removing a foreign criminal’s right to appeal in the UK unless they could show a ‘real risk of serious irreversible harm’ if they were deported back to their country. Of course the implementation has led to significant misery for many in the UK. In 2018, an Afghan man who was seeking refuge from the Taliban was deported for committing some minor offences. He was shot dead upon returning to Afghanistan.

This scheme also played its role in the ‘Windrush’ scandal, which was exposed in 2018, where many migrants from the Caribbean were cruelly and unnecessarily deported for either minor criminal offences or for not having the proper documentation needed to prove they are British citizens. Many had lived in the UK since childhood. This resulted in 11 people who had been wrongly deported to the Caribbean ending up dead, while the actual number is speculated to be higher. Such scandals show an utter disregard for life – specifically the lives of immigrants.

But what really exposes the criminalisation of seeking asylum in the UK is the literal imprisonment of these defenseless people in detention centers. A Parliamentary report found that, in December 2018, 61% of those held in detention centres across the UK were asylum seekers. Detention centres have been compared to prisons but often worse since asylum seekers are held indefinitely with no guideline on when they will be freed. This treatment of asylum seekers spreads into the public discourse. When so many are treated and housed like criminals, many take on the unjust belief that they should be sent back to the first ‘safe’ country they landed in, as per the ‘Dublin Regulation’ of EU law.

The aim to prevent asylum seekers from even reaching the UK border is one shared by former and current Home Secretaries. The previous Home Secretary, Sajid Javid, reinvigorated these tough policies questioning if those ‘refugees’ making the trip across the English channel on small boats are ‘genuine’ asylum seekers. In January 2019, he declared a ‘major incident’ after 200 boats had been reported crossing the channel and called in the Royal Navy to help deal with this ‘crisis’.  This has been expanded upon by the current Home Secretary Priti Patel. In August she discussed with her French counterpart, Christophe Castaner, measures that could be taken to increase the interceptions of those attempting to seek refuge across the channel.

It is clear that the UK is not living up to its global responsibility to be a sanctuary for legitimate asylum seekers, whether this is through their hard-line and cruel policies, which have sent refugees back to their home countries resulting in the death of many, or through their callous detention of asylum seekers for long periods or their harsh crackdown on those coming across the English Channel on boats. It is clear the whole system needs to be re-evaluated and reformed.

This article has been written by Conor Kavanagh who is a content writer for the Immigration Advice Service – an organisation of UK immigration lawyers that offers free advice and support for asylum-seekers and victims of abuse.

One thought on “Criminalisation Of Asylum Seekers”