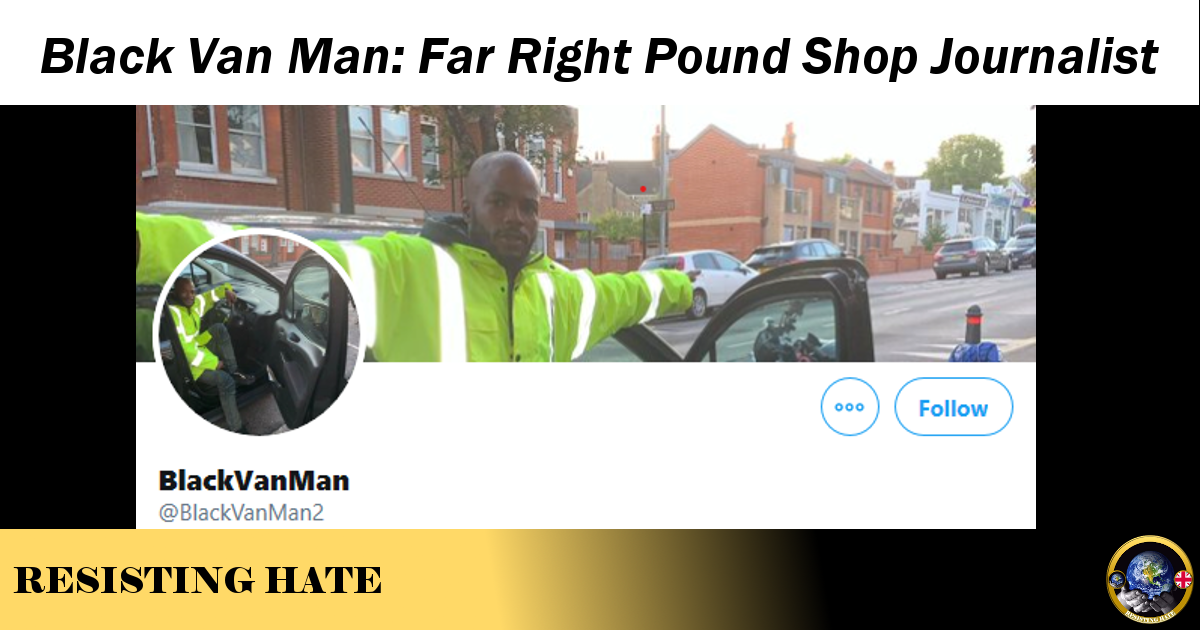 I write this as an ethnic minority who is also a proud member of Resisting Hate. One of my main reasons for joining RH was that I was sick and tired of people feeling that they had the right to victimise, bully, harass and intimidate others just for who they are or what they identify as. This came to a head as a result of Brexit, the Charlottesville protests, the election of Donald Trump and other far right populist events around the world. However, what worries me most is the rise of hatred in every day to day life, be that at work, on the streets or in our institutions.

The empowerment that Far Right politicians and activists like Tommy Robinson, Anne-Marie Waters and James Goddard have given to racists and xenophobes is a massive problem for our country.

An example of one of those empowered racists and xenophobes is the wannabe journalist above who goes by the name of ‘BlackVanMan’ on social media. People ask how a Black man can be racist but the truth is that any one, regardless of identity such as Race, Religion, Gender, Sexual orientation etc, can be racist or xenophobic.

In my opinion and in my own words I state that Fascists and Nazis can come in all colours, shapes and sizes (just like the pound shop journalist above…)

This individual first came to my attention on YouTube when he was seen provoking a group of Anti-Fascists at a Free Tommy Robinson counter protest. I will put the links to his videos for evidential purposes only as we at Resisting Hate do not promote the works of fascists or any other member of the far right.

The YouTube video clearly shows BlackVanMan being asked by a member of Stand Up To Racism not to film. He was asked by the protestor kindly but continued to provoke the situation by filming a private event. He was firmly told by a Police Officer not to provoke members of the counter protest or he faced being removed. Being a so-called journalist BlackVanMan should have known that members of the Far-Right use footage, pictures and social media to harass, provoke, threaten, intimidate and even turn up to houses of anti-fascists.

Unbiased? Really? Does he even know what the word means?

BlackVanMan then used the incident he had engineered himself to condemn the antifascists in order to promote his own narrative and agenda about leftwing censorship.

BlackVanMan then made extensive attempts to promote profile within the Far-Right scene by arranging a five-part interview with non-other than thug, failed kidnapper, PayPal patriot, loser and Islamophobic activist Danny Tommo.

BlackVanMan is instantly recognised by Far-right members as a member of their movement and is seen as a trophy figure. By having a black associate the far right believe this excuses them from accusations of racism. But it is very racist to resort to using black people for ‘tokenism.’ It is also racist to assume people of colour cannot be racist. Anything that treats people differently based on their skin colour is racism. How shallow is the mindset of the far right!

The amateur far right journalist is very active on Twitter and is also a fan of Katie Hopkins and her islamophobia.

Blackvanman likes to jump on the band wagon in attacking Sadiq Khan, our London mayor, just like Islamophobe and racist Katie Hopkins does (a woman so vile we call her HATIE Hopkins at Resisting Hate!)

Looking at BlackVanMans Twitter posts it seems that he has learned and adopted the hate rhetoric of the far right. I were to analyse BlackVanman closer it would seem he is desperate to find acceptance within the Far-right movement by attacking left-wing politicians, activists, other minorities or those who stand against hatred and discrimination. However, I am also suspicious to the possibility that he has seen an opportunity to make money out of the lucrative world of Far-Right hatred. He would certainly be following in the footsteps of Tommy Robinson, James Goddard, Danny Tommo, RedPillPhil and countless others.

A journalist, a real journalist must do a lot of research, which includes reading, and if he can read, I would say he would know the meanings and relevance’s especially the current political and historical meanings of words such as Nationalism, Patriotism and Heritage

A journalist should know the links between Patriotism, Nationalism and Heritage and the term ‘Ethno-State’ in today’s political world. Either BlackVanMan is too stupid to own a dictionary, he is a turkey voting for Christmas or he’s been in a coma for the last four years.

Unsurprisingly BlackVanMan admires the teachings and words of the Racist 45th President of America, Donald Trump.

It might be an idea to educate our Poundland Journalist as to who Donald Trump is and what he stands for:

BlackVanMan likes to visit the Far-Right souvenir shop… Does he know that the Uk Yellow Vests are also connected to the National Front?

There is no evidence to suggest that the tragic traffic incident that killed Josh, Harry and George was anything other than a traffic incident. Suggestions that this was a religious terror attack are speculative far-right propaganda.

BlackVanMan should take a leaf out of RedPillPhil’s book as RedPillPhil was a recent victim of the racism that he himself used to support. History is repeating itself and I hope that when the PayPal fund dries up and the inevitable happens then this pound shop journalist will come to his senses.