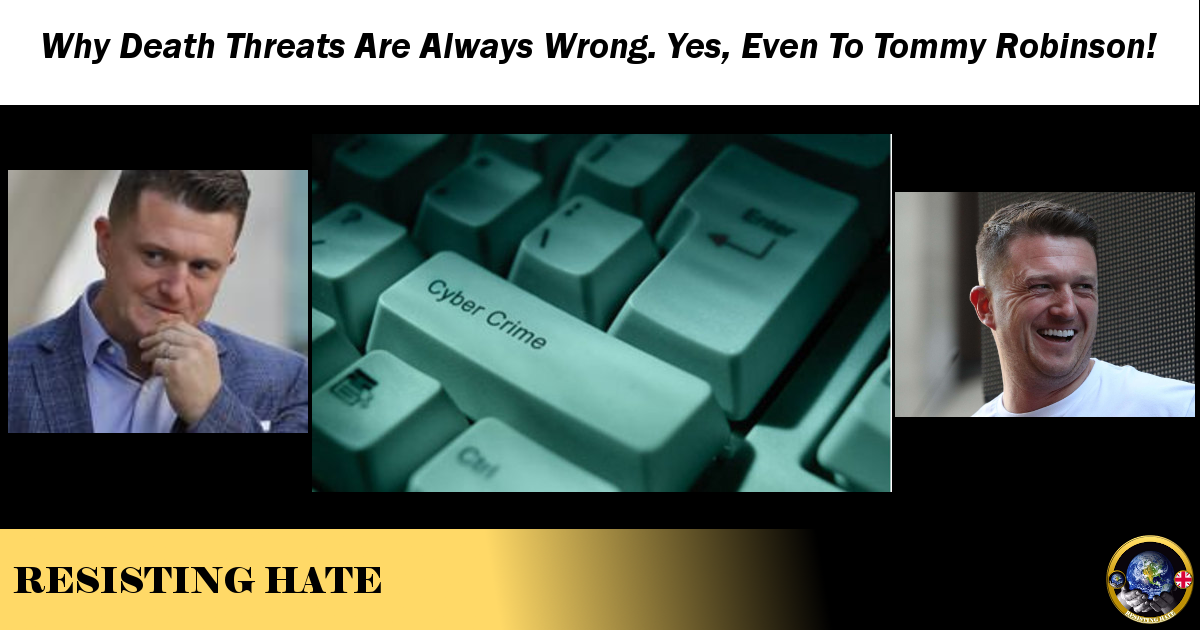 It is no secret that Resisting Hate think Tommy Robinson is a dangerous far right extremist. He is a racist, bigoted hater who uses his easily duped and gullible followers to grift vast amounts of money and promote his own personal war against the Muslim community.

But abhorrent as I find Robinson’s views and behaviour I have been alarmed this week at the reaction to the death threats he received online. I have been particularly concerned to see posts on social media excusing and defending the behaviour of the individual who threatened to kill Robinson. And I’m going to explain very clearly why I will not support death threats against anyone, even the de facto leader of the UK far right.

Robinson may be a vile individual but he has a family. Whatever he deserves, his kids do not deserve to lose their Dad. It is morally wrong to punish the children for the sins of the father.

It is also morally wrong to take the life of another person. Deplatform him, sue him, imprison him yes. But it is not up to any other person to make the choice as to who lives and who dies.

Morality aside it is also legally wrong to make death threats or attempt to take the life of another person. As supporters of the political left we must be seen to be upholding the laws of our country. Yes there are massive problems with both our government and law enforcement and yes I acknowledge there is major corruption and support for the far right in the police. But we cannot expect others to follow laws if we are not willing to do so ourselves. If we sanction death threats toward anybody then we effectively put everybody at risk.

Life with mental health can be hard and full credit to the people who struggle through it and forge lives and careers and relationships. Why should they be tarred with the same brush as some scumbag who sits at home and makes videos about killing people?

Yes the individual’s mental health may have been a contributing factor and yes he absolutely should get medical help. But I’m not absolving him of his behaviour. He needs to take responsibility for his actions and in my opinion the law were right to get involved.

(Tommy’s reaction of course uncalled for as usual. Entirely inappropriate to doorstep the individual. We have a police force for a reason and Tommy needs to understand he does not represent the law of this country).

There are wider repercussions for allowing death threats to go unchallenged. The first reaction of the far right upon seeing the videos of the person making threats was: “This is indicative of how all Muslims behave.” Sadly this kind of skewed thinking is endemic among modern fascists. So the danger is that when one member of a community behaves badly it is the other members of the community who will bear the consequences of their behaviour. It isn’t this prat sat at home making his videos who will suffer. It will be women wearing the hijab while shopping. Video threats man has achieved nothing positive with his threats, all he has done is put visibly Muslim ladies at even more risk of abuse than they already were.

We should not have to be ambassadors for our communities but when faced with the generalisations of the far right we have no choice if we want to keep people safe and free from abuse.

Exactly the same argument applies to the left wing. If some left wing activists are seen to condone (or even in some cases applaud) threats of death and violence then the assumption will be that we all condone it. This discredits the political left and fuels the far right rhetoric about antifascists and the lies they tell about the tactics we use to oppose fascism.

And let me be clear. If anybody ever is stupid enough to kill Tommy Robinson then they will be making him into a martyr.  I don’t like the fact that Robinson has support but he does and nothing would ignite those supporters to violence more than turning the man they already see as some kind of Messiah into a martyr.

One thought on “Why Death Threats Are Always Wrong. Yes, Even To Tommy Robinson!”