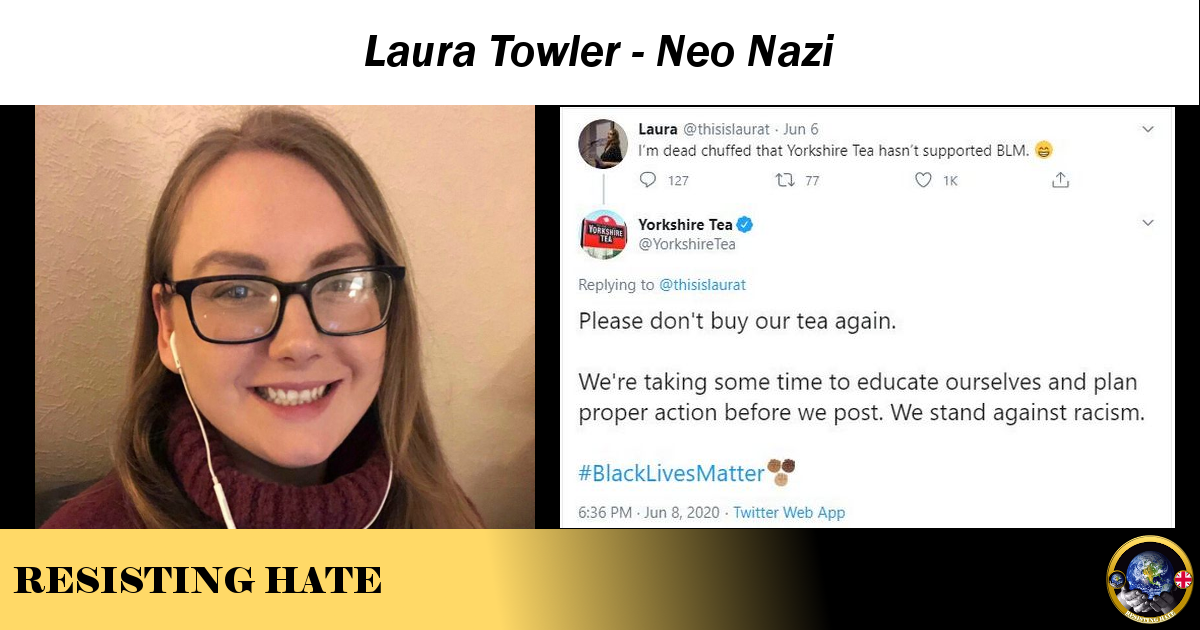 Laura Towler, a pseudonym for Laura Tyrie, is a 33 year old white nationalist (White Supremacist), anti-Semitic and great replacement conspiracy theorist, active on YouTube, BitChute and Twitter. Laura, as Deputy Leader, along with Mark Collett, neo-Nazi and former head of publicity for the BNP, leads Patriotic Alternative, a far-right white nationalist Neo Nazi group with ambitions to be a political party.

(Ed. Resisting Hate have been actively sending information relating to the Nazi views of Towler and Collett to the Electoral Commission. It is our belief the group are not a political party because of their extremist racist views)

In a recent Hope not Hate report it was noted that, “Patriotic Alternative forwards extreme policies, such as repatriation, and its members voice highly extreme views, including expressing Holocaust denial and supporting those who call for political violence.”

Towler pre-2017 was part of the counter-jihad movement; she radicalised further to become a white nationalist.  From April 2017 until March 2020 she was editor and article writer for the white nationalist/alt-right/anti-Semitic news website, Defend Evropa.  The Defend Evropa website has been ranked low for factual reporting by Media Bias/Fact Check (MBFC), a fact-checking website which indexes and ranks websites by left or right wing bias (each website is ranked from “extreme left” to “least biased” to “extreme right”), with Defend Evropa’s articles described as extreme right propaganda, with the website designated as a conspiracy and hate group.

In the summer of 2019 Towler resigned from her job as a management accountant for an information technology and services company (Pheonix Software Ltd) in Pocklington, East Yorkshire so that she could concentrate on her far right activities.  Following Patriotic Alternative’s autumn conference in September 2019, Patriotic Alternative’s leader Mark Collett offered Towler the role of Deputy Leader.

“Repatriation will be a key part of Patriotic Alternative’s solution to restoring Britain to an overwhelmingly ethnically British majority nation. A figure of ideally 95% or above, at which point policies will be put in place to ensure our percentage of the population does not fall.”

On gaining power Patriotic Alternative would implement a program that would offer anyone who is not ethnically British voluntary repatriation, buying back their passports for £15,000 each with the provision of a one-way plane ticket to a country of their choice, this policy would be funded by tax payer money and is estimated to cost tens of billions of pounds to instigate, such a policy would be to the detriment of central government spending in the United Kingdom.

(Ed. Resisting Hate wrote an economic analysis of the Patriotic Alternative proposals. In a nutshell, they are totally unworkable nonsense.)

Towler, along with Collett, was invited to speak at the ethno-nationalist conference Awakening III Nova Europa on the 18th of April 2020, Finland,. The conference is organised by a group of Finnish far right activists.  The event was cancelled due to the COVID-19 pandemic.  Other guest speakers included Tom Sunic and Johannes Scharf.

Tom Sunic, is a Croatian-American translator, far-right activist, described by Southern Poverty Law Center as being a white nationalist, Sunic has spoken at, amongst others, a Swedish neo-Nazi festival, far right meetings in Britain i.e. Generation Identity and an extreme right wing conference in 2011 called “Identitär Idé” (“Identitarian Idea”).

Johannes Scharf, also known as Jonathan Stumpf, is a politician in the neo-Nazi National Democratic Party of Germany (NPD) party.  The NPD is described as a far-right and ultranationalist organisation, in Peter Davies’s book The Routledge Companion to Fascism and the Far Right, he referred to the NPD as “the most significant neo-Nazi party to emerge after 1945”.  Scharf is also head of the Nova Europa Society a neo-Nazi group led by a nucleus of white supremacist writers and publishers that was founded in late 2018, and as such the author of various white supremacist books and articles.

The conference was rescheduled for the 17th of October 2020 but was again postponed due to the ongoing COVID-19 pandemic.

During September 2020, both Towler and Collett had issues with their respective banks, banking services were withdrawn and their accounts later closed, Towler’s personal account (Santander) and Collett’s business account (HSBC).  Both complained about their treatment during a YouTube livestream (Patriotic Alternative Autumn Update) on the 2nd of October, 2020 on Collett’s YouTube channel, with Towler stating that:

They [the bank] sent me this letter, which says “Under the terms and conditions of the account we can withdraw banking facilities at any time and in line with our company policy we don’t give further information on how we made our decision”.  I did some research and there is three reasons why they can lock your bank account.  The first one is fraud, but I know this isn’t fraud with me because he [the bank manager] told me it wasn’t fraud with me.  The second reason is if you are cashing bad cheques, but I know it isn’t that because I have never written a cheque in my entire life, I don’t even have a cheque book and the third reason is funding terrorism”.

A mix of rules currently govern how banks handle account closures.  Banks have the right to terminate an account without giving a customer a reason.  All that is required is for the bank to give notice of its intention, typically 30 days.  A closure can be triggered by any number of reasons.  It may happen as a result of unusual and suspicious transactions, several big deposits for example.  It can also follow suspected fraud, an account’s use to support unlawful activities such as terrorism, suspected money-laundering, or a customer being persistently rude to bank staff.

Far-right groups often us encrypted messaging apps i.e. Telegram, to set up a range of channels dedicated specifically to the discussion of COVID-19 and to amplify disinformation.  Conspiracies are prevalent within far-right social media circles, with many of them degenerating into overt anti-Semitism, with claims that the virus is a hoax engineered by “Jewish elites” intent on implementing a vaccine either for profit or to eradicate the white race.