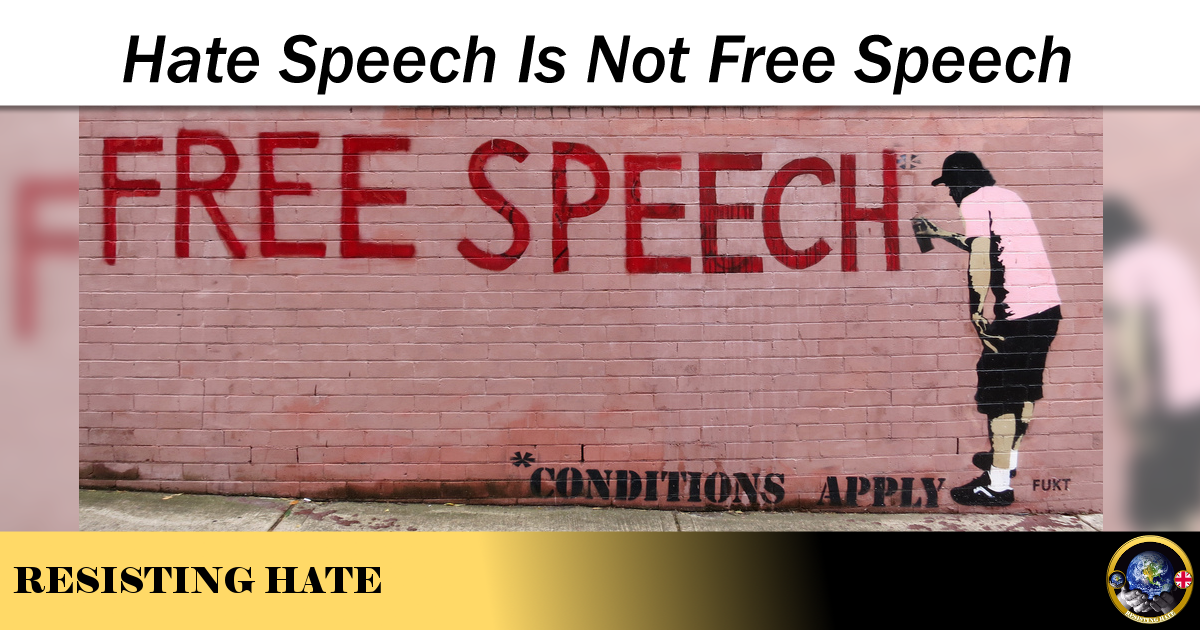 The right to free speech has become a contested and contentious issue in the arena of anti hate activism. The pro free speech argument rests on the fact that people have a right to express their views and that censorship denies people this basic right. The counter argument runs on the lines that there needs to be exceptions to free speech for the safety and good of society.

Both myself and Resisting Hate strongly believe that hate speech is not free speech. Free speech is not the holy grail of civil liberty. No human being exists in a vacumn where they can speak as they please with no regard for the consequences of what they are saying.

Invoking stereotypes is the antithesis of free speech. It shackles individuals to being a caricature of their race, faith, gender or sexual orientation and denies them the right to be identified based on their own merit and identity. When we deny people the right to be individuals it is the start of a slippery slope where people are objectified and categorised as a product of a type. This eventually leads to the process of dehumanisation where human beings are no longer seen as individuals in their own right.

The easiest accounts to get suspended on social media are the ones that make threats of violence. These can be in the form of a direct threat to an individual or an oblique threat to a group or community. Threats are a problem for two distinct reasons. Firstly there is the obvious fact that a threat makes an individual or group feel unsafe and at risk of perceived or actual physical harm. But perhaps equally as worrying is the fact that when threats go unchecked they encourage other haters to take part in threatening and violent speech. It is important to take threats seriously because they can and do escalate into physical harm. Threats do not constitute free speech.

I do agree that an individual has a right to express an opinion. There are many cases where I dislike the opinions of others but I acknowledge that they have a right to hold and share those opinions. What they do not have a right to do is tell lies to publicly reinforce that opinion. Our group saw an example of this the other day where a photograph of a child mauled by a dog had been used on social media to report an “attack perpetrated by immigrants.” There was no attack, the story was entirely fictional and was being spread to incite hatred against various groups in the UK perceived not to be “English” enough by a group of far right Twitter accounts.

While we are all free to tell the truth, in my view, freedom of speech does not extend to telling untruths with an agenda to demonise others.

Actualising the “right” of free speech violates the rights of others

One of the most common objections our group receives in relation to our belief that hate speech is not free speech is the argument that an individual has the right to say what they please and that putting restrictions on this denies them that right. Putting aside the issue that alongside the right to free speech comes an implied responsibility not to abuse that right there is also an inherent conflict between the right of one individual to express a view and the right of another individual not to be abused or verbally attacked. One social media account may wish to express for example their extremist hate view (and I use this atrocious example as it is a real life example seen so frequently by us) that “All Jews deserve to be killed.” However a Jewish person also has the right to log onto social media without being exposed to the extremist view that others wish them dead.

Free speech is not as simple as saying it is the actualisation of a right – as the right of one individual in this case is a direct conflict with the right of another.

Freedom of speech does not mean speech without consequences

There was an outcry on Twitter the other day as a response to the verdict on the Katie Hopkins court case where the court ruled that Ms Hopkins had to pay damages to the plaintiff for tweets implying the lady in question had desecrated war memorials. The view was expressed by some that Ms Hopkins was exercising her right to free speech and therefore should receive no sanctions for the comments she had made.

This misses the point of what free speech actually is. Free speech is not speech free from consequences. When we choose to express ourselves we also choose to accept the consequences of that speech.

When we are exposed to hate on a regular basis we become desensitised to it and extreme views become ubiquitous. If we allow speech with no regulation or restriction and accept that any individual has the right to express any view then we open ourselves to the very real danger of normalising hate in our society. We destigmatise those members of society who spew hatred into our world and we allow views of division and discrimination to become endemic within our communities.

If we open the floodgates to hate it will be impossible to turn our backs on it.

One thought on “Hate Speech Is Not Free Speech”