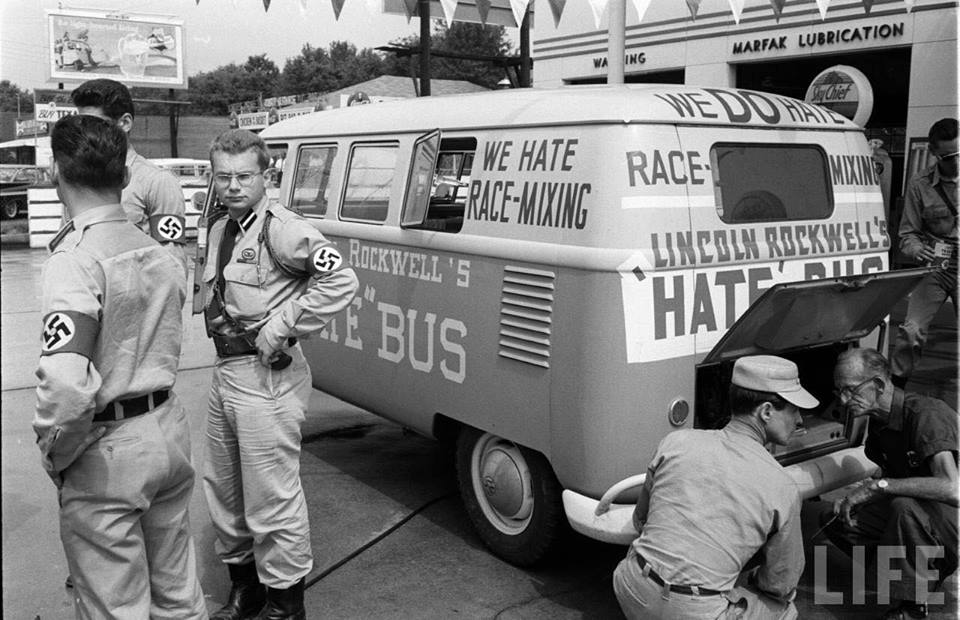 In light of talk of “Nazis” in America and those who sympathise with them I thought I’d cover the “American Nazi Party” and the original leader George Lincoln Rockwell.

In this country (UK) there is the New British Union which I covered a few weeks ago  which is mirroring the British Union of Fascists set up by Oswald Moseley. The history and set up of the American equivalent is very different.
A man called George Lincoln Rockwell created and headed up the organisation in 1959. Rockwell was born in 1918 in Illinois and after graduating from high school subsequently applied to go to university in Harvard. He was not successful in that application but later applied to study at the Hebron Academy in Maine where he started reading Western Philosophy.

During his studies Rockwell read the bible and changed faith to Christian. He was a promoter of Identity Christianity whose followers identify themselves as being superior due to being the descendants of Europeans who were seen as “chosen people”. Their doctrine also states that non-white people in the world would need to be either exterminated or taken into a life of slavery. (This is a summary, the ethos of the group would warrant an entire article of its own).

After completing his education Rockwell joined the US Navy and fought both in WWII and the Korean War as a naval aviator. By all accounts it seems that he did well in his military career, becoming a Commander and having no issues during his 19 years of service. He did however get divorced while stationed in Iceland and then met his second wife where they married and had a honeymoon in Berchtesgaden (where Hitler had his retreat in the Bavarian Alps).
After the war he had a number of jobs, from sign painting to creating a magazine for US servicemen’s wives. The publication had a series of financial problems and he ended up selling the magazine.

While spending time in San Diego, Rockwell became interested in Adolf Hitler and his political ideals and pursued this to the extent that he read and agreed with what was written in Mein Kampf (I have read Hitler’s book and it is an intensely boring read, just page and page of paranoid ramblings.) and The Protocols of the Elders of Zion (another intensely boring read). At this time Douglas MacArthur was pursuing a position of President of the United States, which Rockwell supported due to his beliefs and his stance against communists (he even bought and smoked a pipe like MacArthur did) . He was also influenced by a magazine called Common Sense published by Conde McGinley, which was an Anti Semitic newsletter.

Rockwell moved to Washington where he was involved in many demonstrations against the war and became so “far right” that when someone sent him a swastika flag, he created a shrine to Hitler and so completed his move to Naziism.

In 1959 Rockwell created a group called the World Union of Free Enterprise National Socialists (handily shortened to WUFENS but only 9 months after it was created he changed it to the American Nazi Party (ANP).

It was while in Washington that Rockwell spoke at demonstrations which, in a very Hitler style, lasted a very long time, sometimes a couple of hours. He was refused permission to speak in New York but did speak to reporters about his ideals and what would happen to Jews if he won an election to be president (which was his goal). He explained that if they were patriotic Jews then he would allow them to stay in the country. If they weren’t however, then he would execute them. He estimated that 90% of Jews fall in the “traitor” category.

The American Nazi Party owned a vehicle known as the “Hate Bus”. This VW minibus was driven to places where they had desegregation of areas (a good example being bus shelters). They wrote slogans on the bus which proclaimed their thoughts on “race mixing”. In the end however, the bus was repossessed which rather put an end to that venture.

The American Nazi Party was based on not only the ideals promoted by Hitler in the German Nazi Party in WWII, but also the uniform and flag of the Third Reich. Rather than the traditional Nazi “Sieg Heil” they chose to shout “white power” in its place.

In an attempt to become someone who people would vote for in an election, Rockwell changed the name of the American Nazi Party in 1967 to National Socialist White People’s Party (this was partially to counteract the civil rights group National Association for the Advancement of Coloured People). This angered many of his followers, who believed that he was betraying the intrinsic values and beliefs of the party.

In the end, the National Socialist White People’s Party was taken over by a neo-Nazi called Matt Koehl who changed the name of the group to the New Order in 1983 and that is where the American Nazi Party as a group ends. The New Order exist today however they are very much a small group who keep well out of the spotlight. They celebrate Adolf Hitler’s birthday and believe that they, as an ideological group, are the heirs of Hitler himself.

Rockwell was assassinated in the end on the 25th August 1967 by a disillusioned ex member of the ANP. The reaction of his father says a lot – he was quoted as saying: “I am not surprised at all. I’ve expected it for quite some time.”

As Rockwell was a veteran and had been discharged after having a very honourable service, the government agreed that he could have a military burial in Culpeper National, Cemetery. They did give a proviso, that there were to be no Nazi flags/insignias etc however the Nazi members of the funeral party ignored this and there was a tense five hour standoff where the hearse couldn’t enter the cemetery as it had been blockaded. The hearse was actually next to a railway track and was almost hit by a train at that time. Rockwell’s body was cremated the following day.

And so ended the ANP. While the members were very active and have influenced other groups like New Order and Ayrian Nations, David Duke and William Luther Pierce (the founder of National Alliance) as a group they were politically impotent and didn’t get very far.  During our time on Twitter, our group has come across many people who seem to have a thing for Rockwell and the ANP and who consider him to be a pure ayrian individual who epitomises everything the far right stand for.