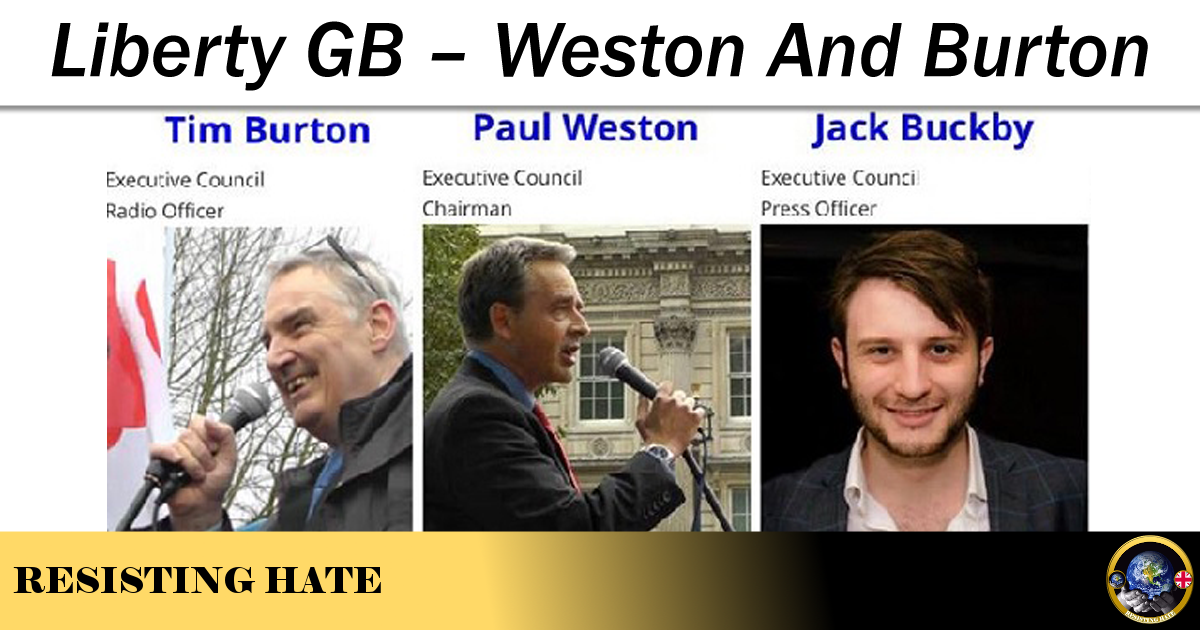 The leader of Liberty GB is a man called Paul Weston, who used to be a member of UKIP from 2010 until he left in 2011. He stood as the UKIP candidate for London & Westminster in the 2010 general election, where (in true right wing fashion) he got a massive 664 votes (1.8% of votes cast). To put that into perspective, he was only able to beat the English Democrat candidate and two independent ones which included a man called “Mad Cap’n Tom” and Jack Nunn of the Pirate Party…

Being unhappy with the performance of UKIP and the fact he said that it didn’t address issues relating to Islam in the U.K, Weston joined the British Freedom Party and took over the running of the organisation as chairman from Peter Mullins. It was shortly later he formed an alliance with the EDL (see our article on Tommy Robinson for more on them.)

The British Freedom Party were dissolved in December 2012 and this left Weston free to move on to a new venture, that being Liberty GB in March 2013. This group states that it is “Britain’s most outspoken political party” and will address issues that the main parties together, with UKIP fail to tackle.

Liberty GB consider the main issues they wish to address are:

1. Mass immigration from the third world
2. The rise of fundamentalist Islam
3. The hijacking of traditional British culture and institutions by left wing progressives.

They go on to state that they do not know at this stage whether Britain can be saved. Weston has actually stated that he expects a civil war within the U.K. between the “white working class” and immigrants within the next 20 years.

It has to be said at this stage that I do find their immigration policy amusing, along with their complaints about dilution of British culture, especially as Weston not only married a Romanian migrant, but also claims to have worked as a deep sea diver, a pilot in Africa and a property developer in the Czech Republic.

Liberty GB went on to stand in the 2014 European elections and fronted 3 candidates in the South East. They (again true to form) got a whopping 2,414 votes, which is a grand total of 0.11% of the votes. This gained them second to last place out of the 15 parties in the election.

In that same year, Liberty GB hit the papers for a couple of legal incidents:

1. In April 2014, Paul Weston was arrested when making a speech on the steps of the Guildhall in Winchester. At the time that he was arrested he was reading The River War by Winston Churchill. This had been written by Churchill when he was serving in the British Army in Sudan. Weston had been reading passages which were considered anti-Islamic and had been asked by the police to move from the position. He was given a dispersal order as members of the public had complained. As Weston refused to move, the police arrested him on suspicion of religious & racial harassment.

2. On the 4th May 2014, Tim Burton was in Court as he had called Fiyaz Mughal OBE (from respected anti hate and support group Tell Mama) a “mendacious grievance-mongering taqqiya artist”. He then went on to call him a “scumbag” on Twitter. This was in response to work by Tell Mama who confirmed that anti-Muslim attacks had increased following the death of Lee Rigby. On this occasion the court cleared Burton of the charges when it was taken to Birmingham Magistrates Court but Burton has been recalled to court over fresh allegations of harassing Tell Mama.

Following the murder of Jo Cox in 2016, the Conservative, Liberal Democrat and UKIP parties decided to contest her seat in Batley and Spen. Jack Buckby was put forward from Liberty GB to go against the Labour candidate. Jack Buckby had been a member of the youth division of the BNP and had left because the BNP were “too racist”. He got 220 votes, which was a miserable 1.1% of the votes cast.

Even now, the group Liberty GB continues to try and cause conflict between Muslims and Non Muslims despite only having an actual membership of around 400 people. In the same way that Britain First do, they rely on their followers to give them funds to help with court costs when they find themselves in hot water. I do find it interesting that these hate groups don’t seem to be capable of self funding and instead need followers online to put their hands in their pockets.

Now, just as a side thing, just so I could be informed (as I know bigots hate that) I looked up Kel Fritz who has been invited to Liberty GB’s latest courtcase as a “leading international light in the world of counter-jihad”. There’s a lot of…..well……nothing really. Mainly the odd mention on Internet radio and debunked news site article – for example, he is mentioned in an article about the massive riots which cut off the centre of Paris, French politicians appeasing all enemies of Israel and Jews, and the allegation that “France has financed hate speech disseminated by the enemies of Israel”. So that’s Kel Fritzl…….unknown outside his small circle of friends who shines a tiny zippo lighter into the darkness and uncovers about the same quality of news as Sean Spicer announces during his press conferences.

In a nutshell that is Liberty GB. Essentially, no more patriotic than Britain First, the EDL or Tommy Robinson. They all have the same line of speech, which gets them into hot water as it’s not “free speech” but actually “hate speech”. They should do themselves a favour and think twice before tweeting, speaking, screeching or whatever they do as it would cause a lot less bother.