We have recently been asked to add some information about Jack Buckby to our site as many people have seen him mentioned across the Resisting Hate social media. With the council elections looming this seemed a good opportunity to take a closer look at a prominent figure in Anne Marie Waters’ hate party ‘For Britain’.

Jack Buckby first came to the attention of the anti hate community while studying at the University of Liverpool. During his time there he tweeted out a poster from the National Alliance (a white supremacist group in the USA). The poster stated that a person could reduce the chance of getting AIDS by not having sex with “intravenous drug users, bisexuals and blacks” and suggesting the posters needed to be displayed around the university campus. 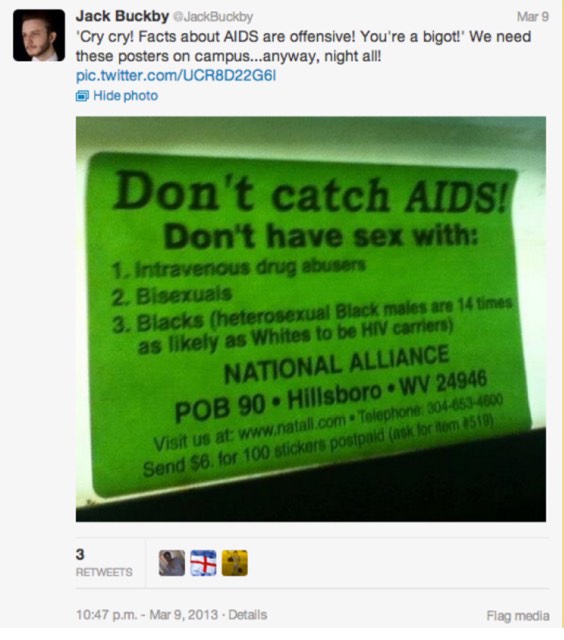 The University dream for Buckby ended when (in his own words), “I got kicked out of university last year for talking about the problems relating to Islam and multiculturalism”. Essentially, he claims that a Muslim lecturer tried to justify the murder of Lee Rigby, and he opposed the lecturer and got excluded as a result. The University and his fellow students have said very little about him being given the boot but the internet is full of videos and articles, mostly filmed by or penned by Buckby, where he claims that the “communist NUS has suppressed free speech”.

The University did made a statement in which said that they are committed to freedom of expression within the law.

“The University is committed to freedom of expression within the law. We would not seek to prevent a group or individual representing a particular point of view providing this is done legally.

We do not, however, tolerate the publication of any material that is offensive, intimidating, threatening, indecent or illegal and appropriate disciplinary action is taken against any individuals found responsible for such behaviour.”

After his failed attempt at an education Buckby turned back up to the University of Liverpool at their freshers fair in 2013 with a skinhead minder as a security detail. He was forced to go home after a successful protest by anti-fascist activists.

Buckby was originally a member of the far right British National Party (BNP). He worked his way up through the bigoted ranks of the BNP and was in the process of being groomed as the natural successor to Nick Griffin. However he left the BNP in 2013 after complaining that they were a racist group (no surprise there, anybody with half a brain would have realised that fact as soon as joining them!)

After leaving the dubious delights of the BNP, Buckby took a step down the hate ladder into an equally vile organisation Liberty GB. He took a position as their “Press Officer” and stood in the European elections in 2014 to represent South East England. During this election he amassed a whole 2,494 votes which works out at just over 0.1% of votes presented…

Following the murder of Jo Cox in 2016, most political parties said that they would not contest the vacant seat,  allowing Labour to field another MP for the area. Buckby however, decided to stand against the Labour candidate. He stated that he was standing because it was the Labour Party who have blood on their hands and that Labour would be “walking the election with smug little grins on their faces”. He didn’t do very well in the Batley & Spen by-election, as he managed to scrape a whole 220 votes (1.1% of the electorate).

Buckby appeared on a live debate on channel 4 in February 2017. During this debate he challenged Barbara Ntumy (a campaigner for the National Union of Students) to take in a Syrian refugee, finishing his challenge by saying that he “hoped she didn’t end up getting raped by them”.

When Anne Marie Waters ran for leadership of UKIP, Buckby offered her assistance and was featured on the documentary Undercover:Inside Britain’s New Far Right. Waters ran an article on her website in response to the program which read as follows:

Some of you might remember our posts in September 2017 about the “Gays against Sharia” march in Bristol. This was attended by Paul Weston, Ann Marie Waters and Jack Buckby, following which the Vice website ran the article How UKIP Is Being Hijacked By Far Right Islamophobes. In this article, Vice describe Buckby as the “Former boy wonder of the British far-right, who is barred from UKIP for his past BNP membership”.

Buckby next appeared in Warsaw in November 2017 for celebrations on Poland Independence Day. This event was hijacked by many far right groups from various countries across Europe. It didn’t take long for some parts of the march to look like a knuckle draggers convention, which is a shame as those attending entirely missed the point of what Poland was celebrating.

Liberty GB was ‘formally’ absorbed into For Britain in late 2018.