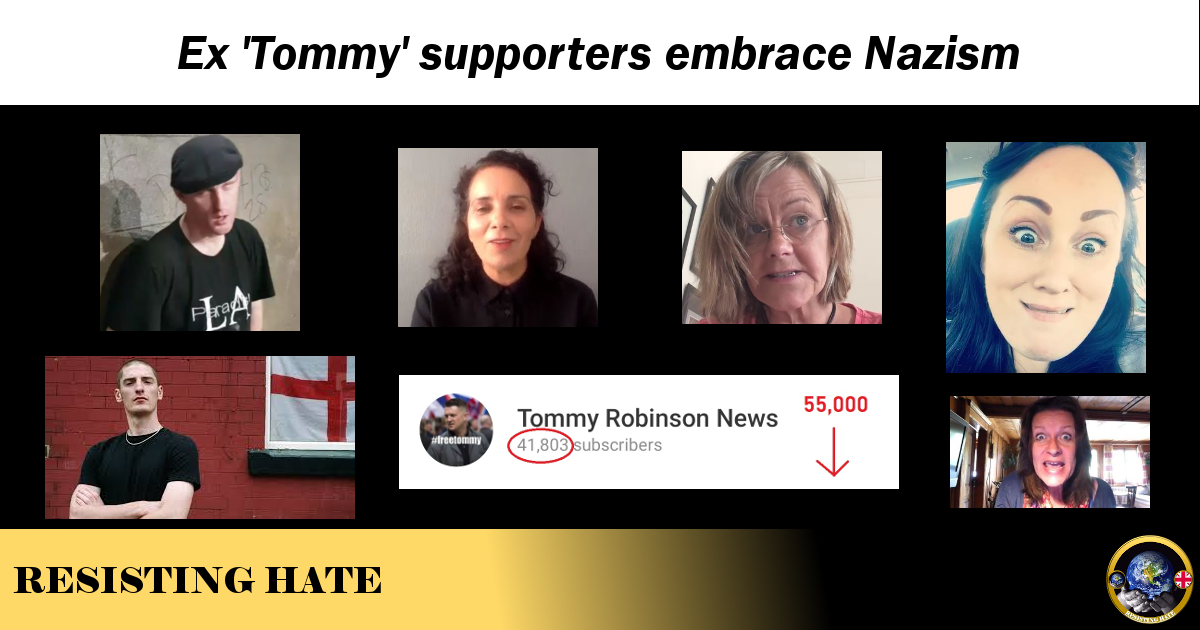 It has been the dearest wish of Resisting Hate for several years now to see hate preacher Tommy Robinson discredited and consigned to obscurity. But, although we are very likely to get our wish in 2020, it will not be in the way ourselves and other anti-hate organisations had hoped it would happen.

To those not following the far right channels on the obscure social media platform Telegram, the prediction that Robinson’s star is starting to fall may come as something of a surprise as there has been little in the mainstream media to suggest a rejection of his views. But anyone watching the fash dramas unfold on Telegram will know there is a winter of discontent looming for Mr Robinson.

The troubles started (as troubles usually do on the far right) with a dispute about money. Tommy supporters Vinnie Sullivan and Danny Tommo fell out about funds allocated for demos while Robinson was in jail. Tommo refused to share the funding with Sullivan. Vinnie’s response was to publicly post that he didn’t care if Danny’s young child was raped.

It was at this time that Vinnie started getting friendly with the ‘Civic Nationalist’ Telegram crowd and looking for alternatives to being a part of the Tommy Robinson movement.

Things escalated in mid 2019 when Robinson was sent to jail for contempt of court. With no clear leader among the UK far right, there was competitive jostling from wannabe contenders to take centre stage. These included Danny Tommo (who largely followed Robinson’s agenda) and Shazia Hobbs (who didn’t).

It was an article written by Shazia Hobbs which fanned the flames of discord when she called Robinson’s supporters out for not having the same prejudices toward Jews that they do toward Muslims. The article is a viciously antisemitic piece in which the general gist is indignation that the far right do not abuse Jews enough.

TR News immediately removed the article from their platform but the message to Tommy was clear. There was a growing movement that wanted the far right to be as vociferously opposed to Jews as they were to Muslims.

Tommy’s team printed a refutation of Shazia’s views and confirmed that the ‘Tommy Movement’ continued to oppose Nationalism.

In the absence of Robinson, TR news was managed by Australian Avi Yemeni. The antisemitic Robinson followers dislike Yemeni on account of him being Jewish and blamed Yemeni for causing friction between Shazia and Tommy.

Shazia Hobbes, it is noted, is friendly with notorious antisemite Alison Chabloz who has served time in prison for her songs mocking survivors of The Holocaust.

Shazia continues to promote her antisemitism on social media

At the same time all this nonsense was going on, an intimate sexual video of Danny Tommo was leaked to Resisting Hate. We were told that this video had been sent by Tommo to grooming gang survivors. After checking this information carefully we concluded it was a lie and that the private video had actually been obtained when Tommo’s phone was stolen. It had been given to ourselves in an attempt to vilify Tommo and, by association, the Tommy Robinson movement. It is our belief that the video was passed to us by ‘Moneypenny’ (real name Kate White, a low impact Telegram account with strong antisemitic leanings and a fixation with Resisting Hate)  who is friendly with Shazia Hobbes and Vinnie Sullivan and who has often passed Resisting Hate information on high profile right wing figures. The intention was clearly to discredit Tommo and weaken the Tommy movement.

The Shazia row split the far right into two factions. The first being supporters of Robinson who has a history of working for a Jewish media outlet and who obtains funding from both Jewish and Zionist sources. The second divided into two camps, one led by Neo Nazi Mark Collett and his gollywog loving ex police pal Dionne Miller. The other led by Vinnie Sullivan and Alexander Sangmoore under the Reality Report branding.

Sullivan quickly aligned with Antifa Public Watch and other smaller right wing outfits to publicise his image. His aim is to become a far right leader. He is not particularly bothered whether he has to be anti Jew or anti Muslim to do it. If anything Sullivan’s focus is more on the political left than either Muslims or Jews.

Sullivan was able to establish a small following on Telegram and You Tube but is held back in his ambition to be seen as a far right leader by his association with Moneypenny and the antisemitic troll faction who frequent the unsavory Free Speech channels on Telegram (and who appear to do very little other than post vile racism and hate posts.) Our prediction is he will get some support and probably make a few quid out of it but Sullivan isn’t a serious threat to antifascism and not a credible right wing leader of the future.

It was Sullivan’s crowd who managed to get Britain First involved in anti Jew rhetoric. Ashlea Simon (the Britain First deputy) has been seen on numerous occasions engaging with antisemites and posting her own antisemitic posts.

Unlike Vinnie Sullivan, Mark Collett is politically astute and has a genuinely revolting antisemitic agenda. He has a history of being involved in extremist groups, including the EDL and it was alleged (though to the best of my knowledge not proven) that he was involved with proscribed group National Action. He’s come out of the shadows now and is actively recruiting Tommy supporters with his Neo Nazi rhetoric.

Collett mainly recruits through online videos. He is banned from many mainstream channels but publishes his ‘Patriotic Weekly Review’ on lesser known fash friendly platforms.

Through his association with ex Tommy supporter Dionne Miller and far right Laura Towler, Collett stealthily worked behind the scenes to boost support for an even further right ideology than the one we have become accustomed to seeing from Tommy. Collett was even successful in converting the owner of the largest Tommy Robinson Telegram chat (then TR Talk, now Patriotic TP Talk) to his Neo Nazi views.

Losing this chat of 4000 people was a blow for Tommy. His own primary Telegram channel has dropped from 55k subscribers to 42k at the time of writing. This attrition can at least partly be ascribed to fascists embracing the extremist anti Jewish rhetoric offered to them by Mark Collett and his supporters.

Robinson’s troubles intensified in late 2019, early 2020 when he released his documentary ‘Shalom’. There was an outcry from supporters who believed he had taken funding raised for a documentary on ‘Muslim grooming gangs’ and used it to make what they viewed as a Zionist propaganda film. This fuelled support for Collett and lost Tommy more followers to Neo Nazi extremism.

The future looks bleak for Tommy Robinson but let me advise antifascists not to start thinking our work is over yet. Call it Civic Nationalism, White Supremacism, Neo Nazism, this new batch of far right fascist scumbags is even uglier and nastier than our old nemesis Tommy Robinson.