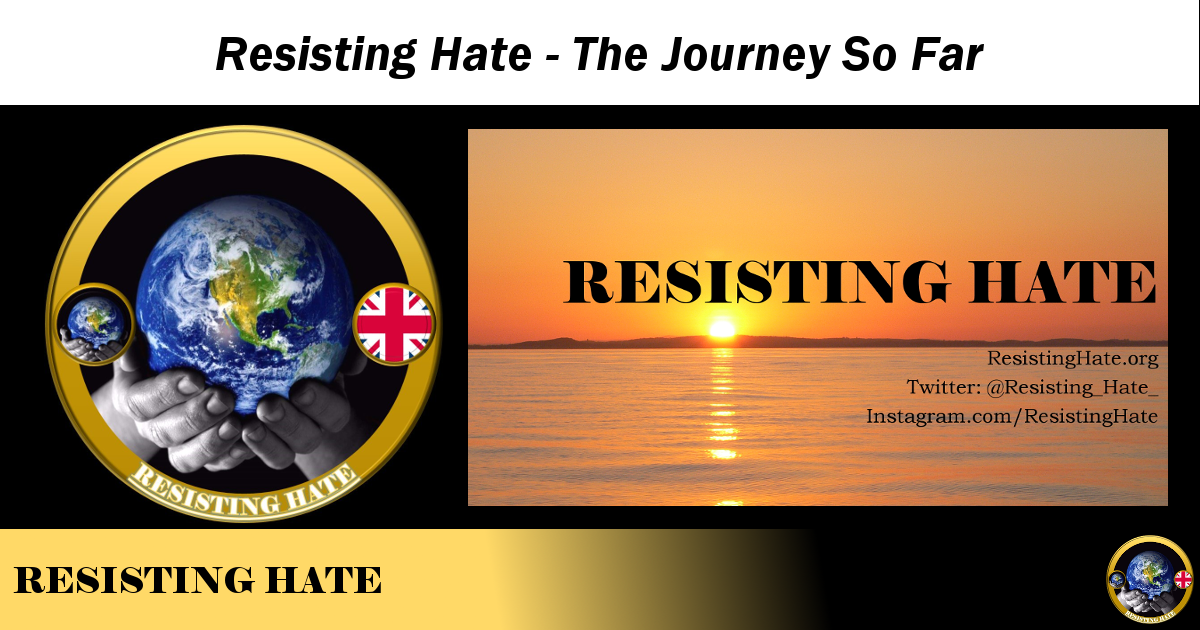 The origins of Resisting Hate date back to 2016 when a small group of online friends who were opposing the online racist organisation Bluehand formed ‘New Bluehand’ in an attempt to disrupt the online recruitment of naïve individuals on Twitter.  Armed with little more than a website, a handful of members and our Twitter accounts (at one point co-founder Halal Kitty was running 90 different Twitter accounts!) we caused chaos for the hapless racists and made ourselves a lot of right wing enemies in the process.

Opposing Bluehand was very satisfying but it soon became clear that the scale of online hate and prejudice was wider than we had realised and growing all the time. In the wake of the EU referendum in 2016 and the election of the extremist Donald Trump later that year we knew that limiting ourselves to the opposition of one group was not enough. If we were serious about tackling hate then we needed to do it on a bigger scale.

At this point we rebranded our organisation to Resisting Hate, a name intended to convey our opposition not just to racism but also to all the other prejudices we were regularly encountering on the internet. Our motto was (and still is) Just ordinary people doing what’s right.

In order to be taken seriously as a credible anti-hate organisation it was necessary for at least one of the founding team to be publicly open with their details. It is a misconception that, as the face of Resisting Hate, I am also the leader. The truth is that there is a team of us, all with equal input and influence but for safety reasons due to the number of threats we receive we thought it prudent the majority of the team remained anonymous.

It is a further misconception that Resisting Hate obtained funding to grow our membership and followers. From the very beginning we understood that to remain independent we could not seek financial support from other organisations or prominent public figures. Nor did we want to raise money from our members as we wanted our key messages and emails to our wider network to be focused on our objectives, not on asking for money. To this day we remain an entirely independent organisation, no backers, no sponsors, nobody pulling our strings. We are guided by morality, not by finance.

We grew Resisting Hate organically through sharing our messages on social media and encouraging other like-minded people to join us. We’ve been lucky enough to have some good press coverage and some very supportive people with good follower bases endorsing the work that we do.

It was important for us to set a very clear vision of what Resisting Hate was to achieve. Some anti-hate orgaisations focus on supporting victims, others on raising awareness. I think the thing that makes Resisting Hate different to other groups is that we proactively go after the haters themselves. We use our internet platforms to name and shame, we run numerous social groups across a range of social media networks where we encourage the reporting of hate accounts, we have an email network with over 2000 people signed up who are involved in coordinated reporting on the big accounts and we have ‘moles’ in many of the private groups on far right channels where we monitor their output and where necessary report to law enforcement or the media.

Through our sister organisation Mock the Right which is managed by Halal Kitty, we use humour as a powerful tool to discredit the idiocy of the extreme right wing.

To date we have been responsible for the suspension of thousands of haters on Twitter, Facebook, Instagram and You Tube. Our biggest success being the suspension of Tommy Robinson and his million followers on Twitter. We also enjoyed being asked to film the serving of legal papers to Tommy’s house in the epic internet meltdown that saw Tiny Tears stamping his feet for days after.

A large part of the role that I was not expecting is being called upon to given advice relating to far right issues in the UK. We’ve contributed information to several doctoral theses, newspaper articles and documentaries and built relationships with different media outlets, including the BBC.

Part of our vision was to create a fluid organisation based more on ideology than formal membership. We don’t hand out membership cards or name badges. You are unable to buy a mug with our logo on it.  If a person feels they share our values then as far as we are concerned, they are welcome to say they are a part of Resisting Hate. We wanted a movement based on the core principles of opposing hatred, discrimination and prejudice, not an organisation based on bureaucracy and internet merchandise.

Our beliefs and who we are have changed little since the day we formed our organisation. There have been some tough times, some pesky internet trolls and a lot of threats. We have lost some people along the way and gained others. We’ve even had our own members suspended on occasion for being a little too enthusiastic opposing haters online.

The world is moving into some very dark times and I hope that the growth and successes Resisting Hate has enjoyed over the last two years will allow us to play our part in combatting the issues that face us all.

4 thoughts on “Resisting Hate, The Journey So Far”