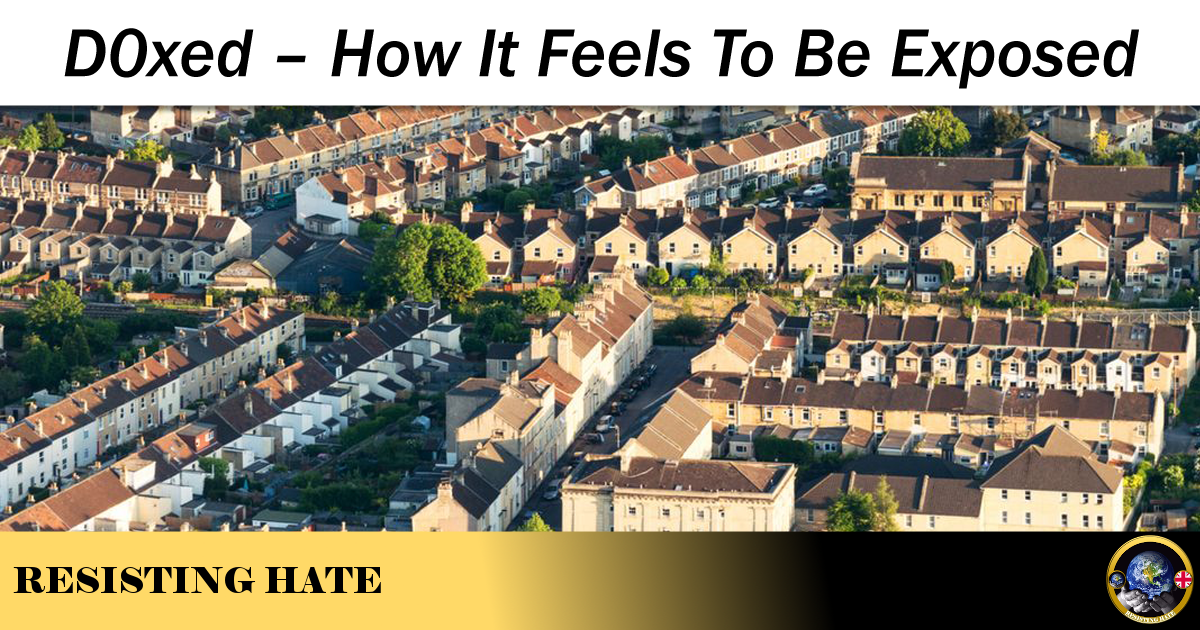 People who value their privacy often use unnamed accounts, some people use them to abuse others behind the mask of anonymity. I ran one myself. Personally I never really had anything to hide, I just used the account to go up against racist idiots in Britain First and the EDL.

Somehow my path crossed with that of vile anti-semite Alison Chabloz, and one of her supporters, the rape-apologist serial stalker Ciaran Goggins. Between them, and possibly with the help of others, they discovered my real name. This was no great secret, and I’d told quite a few people myself.

I woke up very early one morning, around 4am, and decided, after checking the time, to look on Twitter. To this day I don’t know why I did that, instead of turning over and going back to sleep. I was a bit surprised to see three notifications, so I tapped the icon. There were three new tweets, all sent direct to me. I opened them in turn. The first one was a bit confusing, in my half asleep state it looked like a picture of my house. My brain gradually decided that it was, in fact, a picture of my house, at which point I became very suddenly not half-asleep. The picture was one I recognised, as anyone who’s ever used Google Streetview would. Slightly alarmed I opened another tweet. This was another picture, this time of me and my child, and the text alongside it included my name. By this stage I was getting seriously worried. I opened the final tweet. There was no picture this time, just my name and mobile phone number, with a few digits blanked out, but the obvious implication that the sender knew the full number. I was now in a state of shock, not knowing what would happen next. How had this person got my pictures, my address?

I had the presence of mind to know that there was nothing that could be done at that time of the early morning, so I put my head down to try and sleep, knowing it would be impossible.

I dozed occasionally, but when I did sleep I dreamt of ringing phones and lives in turmoil. Eventually the time came when there was no point trying to sleep any longer, and I got up. Damage limitation was now the order of the day. I had realised that the photo of me, and others that subsequently appeared, were all previous profile pictures from my Facebook account. These are always publicly available, and like most parents, included pictures with my children. The first job was to report the tweets as harassment, and in their defence, Twitter acted extremely quickly. I think the reporting systems are programmed to give high priority to certain key words, as when I used the terms “unauthorised”, “photo” and “child” the account that had posted them was suspended in under ten minutes of being reported.

No sooner had an account been suspended though, than another one would appear, posting from the same collection of Facebook photos, calling me a paedophile, or announcing where I lived. Some claimed that the author had submitted my name to sex-offender or paedophile watchlists. With the help of friends, each of these accounts were reported and shut down, but always reappeared in a new guise eventually.

The next few days passed in a sort of paranoid blur. My heart skipped every time the phone rang, especially when it was an unknown number, but each time I answered I heard nothing untoward. Time passed, and with each new day the worry got less. I searched Google for my name in combination with “paedophile”, “nonce” and similar terms, coming up blank each time.

After a week or so I realised that I no longer worried, nothing had changed, my name was out there and it made no difference whatsoever. Since then I’ve barely given it a thought, and couldn’t care less!