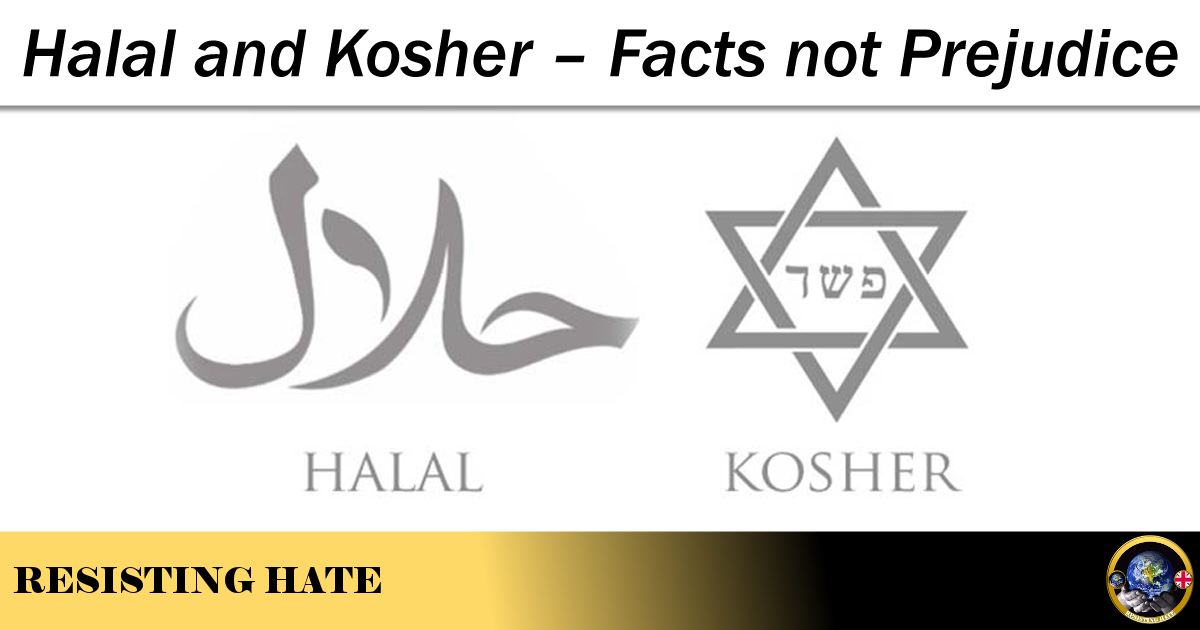 Not being a reader of the Daily Mail their article on the subject of Halal slaughter published on the 24 October 2016 would have normally gone unnoticed. However when it was brought to my attention on Twitter I decided to have a closer look at some of the claims made by the Mail and explore some of the facts behind the hate rhetoric that the paper publishes in place of news.

In researching this article I didn’t want to base my viewpoint solely on the usual academic publications and news articles so I have spent the last two days watching actual abattoir footage demonstrating the three different techniques of pre stun slaughter, no stun slaughter and post stun slaughter. This isn’t an ivory tower approach, I have watched these animals being killed for myself.

The terms Halal and Kosher in this context (Halal for Muslims, Kosher for Jews) relate to food which is permissible to eat under the two religions. These do not exclusively relate to the slaughter methods, there are many other dietary laws involved such as the type of animal that can be consumed, how the meat is served/stored and even the diet of the animal itself. However for the purpose of this article it is the slaughter methods I am concerned with.

The two primary requirements of Halal and Kosher slaughter involve the fact that the slaughter must be performed by somebody of the religious faith and that the animal be killed by a single slit to the throat with the body completely drained of blood afterwards. This is usually achieved by the hanging of the carcass so the blood naturally drains away from the animal. Both faiths emphasise the importance of minimising suffering to the animal and advocate the use of a sharp non serrated blade so the animal is killed quickly due to deep severing of the primary arteries. In both Halal and Kosher slaughter there is a religious observation involved in the ritual. Halal slaughter requires that the name of God be spoken before the individual animal is killed and Kosher slaughter requires a blessing to be performed before each session of slaughter takes place.

There is a common sense approach to the religious requirements of both faiths. A carcass that is not properly drained of blood will quickly spoil. Also, historically, the requirement to slit the throat of the animal would have been one of the quickest methods of despatch available to Muslims and Jews and so would have fit with the humanitarian aspects of both faiths. Incidentally the dietary laws in general have many common sense elements. Neither Muslims nor Jews eat the flesh of the pig which in the hot climate of the pre refrigeration era in the Middle East would have been very sensible indeed as pork does not store well and carries a much higher risk of food poisoning.

The Mail headline as usual makes a claim without bothering to explain the actual facts. The statement “The animal must be alive when its throat is cut and be allowed to bleed out” is misleading as it makes no reference to the time spans involved. It takes on average between seven and thirty seconds for a sheep to lose consciousness after having its throat slit. The bleeding out process is completed while the animal is unconscious and the animal will go from unconsciousness to death with no suffering involved.

The “unnecessary agony” is also an example of rhetoric rather than fact. Many animals are stunned with electricity prior to slaughter so are rendered insensible before the throat is cut. The Mail tries to play down pre stun slaughter by stating “In a number of abattoirs the animals are not stunned over fears it is not permissible.” However, statistically in the UK, 88% of the Halal food chain is killed by pre stun methods. (Check the actual Food Standards Agency figures, not what the Mail tells you the FSA statistics are).

Interestingly enough it is Kosher slaughter (which the Mail makes notably little reference to except as a definition in a side paragraph) that does not permit the pre stun prior to the kill. One senses the ever present anti Muslim Daily Mail agenda at work here.

The Mail makes reference to both non stun and pre stun slaughter but fails to mention the third method of slaughter – post stun – or the fact that this method has gained popularity in recent years. This method involves an electric shock being administered to the animal immediately after the throat has been cut. This is acceptable to most Muslims as the objective that the animal be conscious when slaughtered is met. It is also, unlike pre stun slaughter, accepted in the Jewish faith. The post stun method means that the animal is not even aware of pain for the seconds it takes to lose consciousness. To my mind this increasingly popular method of slaughter also shows that both the Muslim and the Jewish religion are willing to look for new ways to be compliant with their faith while also considering the important point of animal welfare.

I am personally committed to the idea that animals should be killed in a humane manner. As I said at the beginning of this article I made the effort to watch significant amounts of footage across all three slaughter methods to determine in my own mind if I believed Halal and Kosher slaughter methods humane or not. The conclusion I reached was that all three methods (pre, post and non stun) when administered correctly by licensed professionals in authorised premises were to my mind acceptable in the sense that unnecessary suffering was not experienced by the animals. The myths I had heard about – in particular the violent death throes of the animals after the throat is cut – were simply that, myths. The footage I saw of the animals writhing around in what admittedly does look like pain is actually down to post death muscle movement. Even with no stun slaughter the animal is dead and beyond pain within seconds.

I find it suspicious that these two religions should receive such bad press for their religious requirements and strongly suspect this is more to do with the attitude of the right wing media toward the faiths themselves than it is a genuine interest in animal welfare. What my research into abattoirs did show me is that there are still a large number (and I’m talking secular abattoirs now as well as ones with a religious focus) where animal welfare is not a priority and where abuse and neglect still go on. This should be the real expose, not the fact that some animals are slaughtered using what I personally witnessed to be humane Halal and Kosher methods of slaughter.

5 thoughts on “Halal and Kosher – Facts not Prejudice”