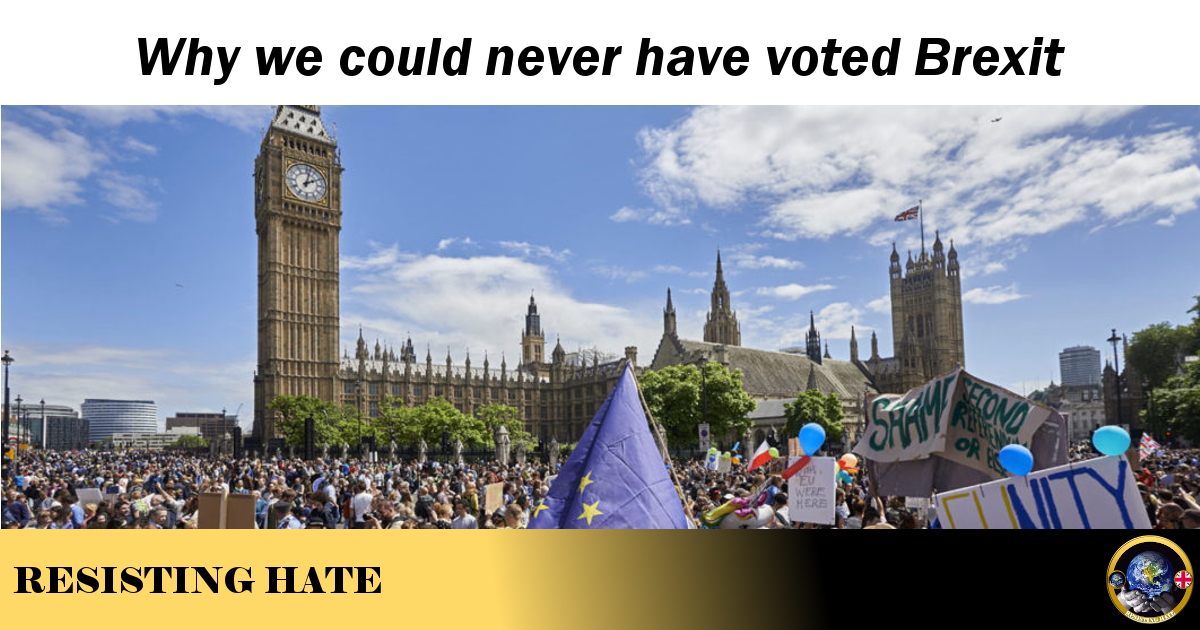 It is rare to find our pro diversity group agreeing unanimously on anything. The strength of our group lies not in conforming our views to fit a party line but in respecting the different views and beliefs held by our members. This defines tolerance as opposed to conformity which pretty much encapsulates the ethos of what we are about.

However the one thing I think I can safely say that every single member of our group does agree on is the importance of staying in the EU. To my knowledge not one member of Resisting Hate voted Leave in the June referendum. And although there were many cogent political and economic arguments discussed in our chat rooms the overriding unanimous unease was that a Leave verdict in the referendum would lead to a great many social problems in the UK.

Although along with many other groups and individuals of an anti hate nature we had predicted that a vote based largely on misinformation concerning immigration would cause some tension in the country I do not think us, or anybody else was prepared for the backlash of hate and intolerance that resulted from the EU referendum. We certainly did not expect to see people stabbed for their racial background, women attacked for wearing Islamic dress, children bullied in the playground for the colour of their skin or people who have lived in Britain all their lives being told to “go back home”.

The big question is why these hate crimes spiked so dramatically after Brexit and whether Brexit caused this hate or acted as a catalyst for the underlying racial and religious tensions already present in the population.

In trying to tackle this question it is important to look at the demographic of the people who did vote Leave. Geographically most Leave voters were outside London, many in the North of England and many in areas of financial deprivation. There are frustrations in these northern communities and often a perception that London has no interest in the welfare of people beyond the capital and the more affluent Southern counties. The referendum took place after several years of Tory austerity which had led to high unemployment and minimal pay rises leaving many families struggling to make ends meet.

There was also a definite split between younger and older voters with the older favouring the Brexit and, broadly speaking, the younger opposing it. If we consider the fact that the base rate had been 0.5% for seven years prior to the referendum it is easy to understand why older voters, many of whom rely on interest from savings to boost their pension were feeling the pinch.

It was from this powder keg of economic discontent that the divisions in society began to fracture. Splitting from the EU was to become a symbol for what would happen to Britain itself as the country began to split into cultural segments.

Discontented with Britain in 2016 many Leave votes saw leaving the EU as the route back to the Britain of olden times. The cricket on the lawn, gin and lime at six, John Betjeman kind of Britain. A Britain that many of those swept along with nationalistic fervour believed had no place for those not born in the country. Voting to leave the EU consolidated a new identity for people who wanted to identify with these nationalistic values.

It was this upsurge in Nationalism, born from economic discontent and fuelled by a xenophobic right wing press (primarily the Mail and The Sun) that led to the disenchanted populace looking for ways to “Take our country back.” Although on the surface of it exiting the EU was about claiming Parliamentary sovereignty and establishing the British Parliament as the final arbitration in legal matters the views of the Leave voters ran deeper than that. Leaving the EU became the symbol of reclaiming their vision of a white Christian Britain. It was not a political break they sought but a cultural break, a reclaiming of what they perceived to be the values of “Great” Britain.

The trouble with this Nationalistic thinking is it hinges on the premise that a single culture is more beneficial to society than a diverse blend of religions, races and belief systems.  This thinking is not only naïve it is dangerous as the consequence of raising one culture above the others is that those who don’t make it into the elite group become the subject of prejudice, discrimination and, as we saw after the June referendum, violence.

Nationalism spectacularly fails to acknowledge that a productive and successful society springs from a culture of integration, not elitism. Pluralism is not a threat to British culture it is the essence of British culture itself. If as a country we can take pride in anything it is our melting pot of cultures, races and faiths and our ability to live in harmony together. We have built a country to be proud of on a backbone of multiculturalism.

Economically speaking I do think leaving the EU is a mistake. I believe it will lead to job losses, an increase in the cost of living and political uncertainty that will stretch way beyond the next General Election. But perhaps even more important than the financial consequences for the country is the consequence to Britain as a community and the loss of the values we are respected for throughout the world, namely our very British acceptance of others.

I said at the beginning no member of our anti hate group voted Leave and this is why. We represent the true patriots of this country, people who are committed to the real values of Great Britain. People who believe that every single person in our country, irrespective of faith, colour or race, has equal worth as an individual.

We like living in a diverse and integrated country and we intend to play our part in keeping it that way.