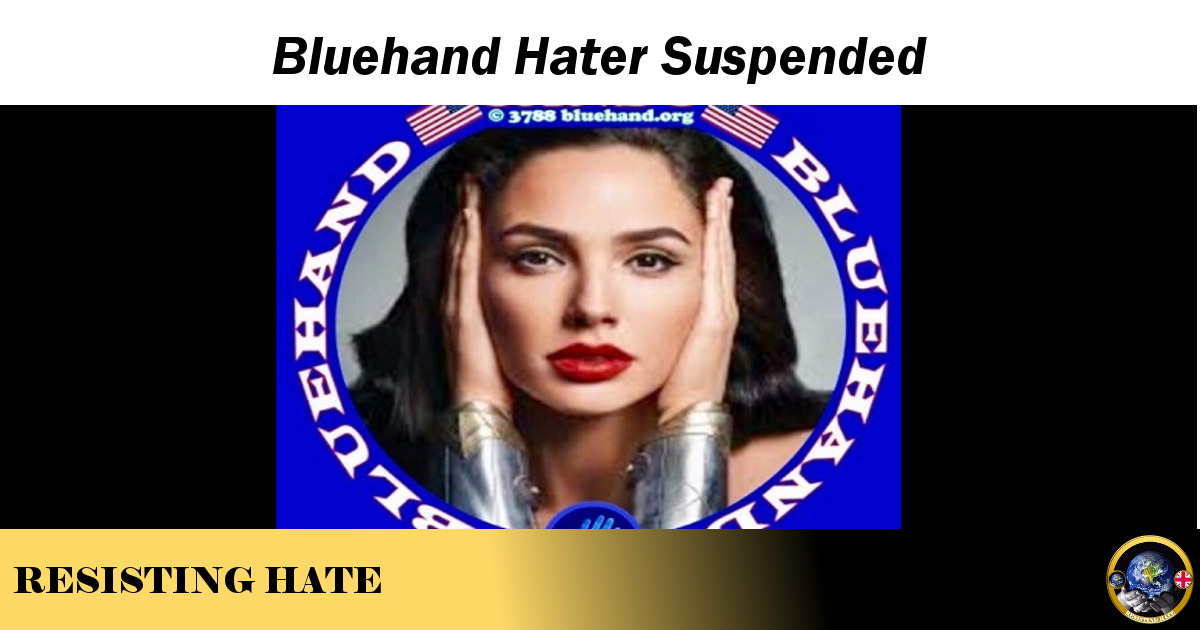 With the suspension of @GSDDogLover from Twitter it seems like a good time to shed further light on Bluehand and their desperate attempts to claim credibility as a bastion of righteousness standing against the ills of the world.

In typical Bluehand fashion, following the suspension of this most loathsome account they immediately tried to manifest some sort of credibility on Twitter for @GSDDogLover by trying to claim Sandy, as she was known, was a well established, respected account with over 40,000 followers trying to rid the social network of extremists. In a last desperate appeal to Twitter for her reinstatement they have even tried to claim she is a Muslim who has turned her back on her faith and found Jesus. The irony of this was seemingly lost on those in Bluehand, and it was assumed by many of their followers that due to her religious conversion Sandy was speaking from a position of authority and expertise. This is a common tactic used by Bluehand. It was probably come as no surprise to readers of the Resisting Hate site that Sandy was about as Muslim as my forest cat.

Sandy and Bluehand have long since defended themselves by claiming to be standing against radical Islam and the evils of fundamentalists. On Twitter this is often done under the flag of #OpISIS – an Anon inspired movement to restrict Jihadist accounts on Twitter through reports and suspensions, thus limiting their ability to spread propaganda.

The facts regarding Sandy and Bluehand are someone paradoxical to the #OpISIS philosophy. As I learned during my extended period helping to run Resisting Hate’s fake Bluehand account, the BH members are merely hate mongers who false flag accounts simply for tweeting in Arabic or Farsi. With access to an Arabic speaker it became obvious very quickly that Bluehand, especially Sandy, were disseminating the names of innocent accounts to Bluehand followers to mass report in the hope that they would be suspended. In a Resisting Hate review of the accounts they shared for reporting – 2/3 had no connection to ISIS or Jihadis and were innocent accounts that Bluehand and Sandy had taken a personal dislike to. Sometimes the accounts had merely disagreed with them and were then thought of as a justified target. More often than not the accounts targeted had never even engaged with Bluehand, the oddest one being a Qatari restaurant critic.

In most cases when you highlight to other #OpISIS users that they have added an innocent account by mistake they are very quick to remove the account and spread the word so that no damage is done. This was not so with Sandy. Having raised my concerns through my main Twitter account I was met with a volley of abuse and threats from Sandy and her followers – mostly confederate flag waving fundamentalist Christian followers who seemed to think I was either a communist, a Muslim or some sort of devil worshipper. (Readers will be pleased to know I am not any of them.) The threats took a slightly more bizarre turn when Sandy started to tag in the FBI and Wiltshire Police (?) Twitter accounts into her increasingly unhinged tweets.

It was pathological hate wrapped up in the thin veneer of trying to help #OpISIS. But what Bluehand fail to realise is that targeted reporting of innocent accounts does a lot of harm. By allowing Bluehand to tar every Muslim account with the same brush the likes of Sandy and Bond (whom you will know from our other articles) reveal their true agenda with crystal clarity. They don’t care about helping to restrict fundamentalists. What they care about is the attention they and Bluehand get by pretending to help, a sort of narcissistic version of a chemical high.

Such tactics and self interest makes Bluehand no better than the evils it claims to stand (weakly) against. In fact as self professed Bluehand leader James Bond’s recent dismissive and wholly misogynistic tweets (in response to the abuse scandal in Westminster) show, he and Bluehand have a lot in common with those who seek to restrict the rights of others. A very fascistic regieme.

So while Bluehand and many other far right Twitter users shed tears over the loss of such a well established Twitter account, I for one will rejoice.