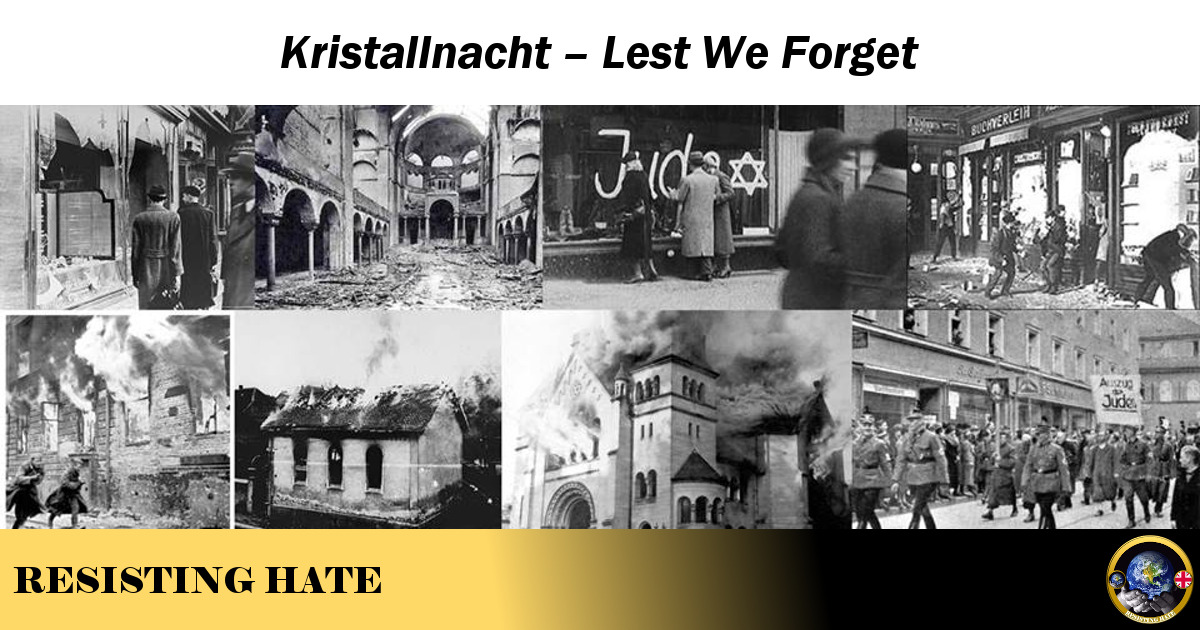 The 9th and 10th November mark an anniversary of a dark event that needs to be remembered as it stands as a warning from history.

On the 9th November 1938 Kristallnacht began – An attack on Jewish homes, businesses and people by the Sturmabteilung or “SA”, who were Hitler’s “Brownshirts”. This attack was in response to the shooting and killing of Ernst vom Rath in Paris, a German embassy official, by a 17 year old Polish Jew called Herschel Grynszpan.

The Nazi leadership were in Munich at the time on the anniversary of the Beer Hall Putsch. It was during this celebration that Joseph Goebbels announced to the gathering that the ‘World Jewry’ were involved in the assassination and that attacks against the Jews were not to be officially organised by the NSDAP (National Socialist German Workers Party)  but if they were to “happen” then nothing should be done to stop them. As soon as this information was given and passed out to the districts through German held territory, riots ‘spontaneously’ occurred. It is recorded that many members of military and SA units put on civilian clothes and went to carry out the actions so that the attacks were seen as outraged public reaction.

This event is classified as a pogrom, which is an uprising aimed to persecute and/or eliminate a group, normally because of their ethnicity or religion. As most people are aware, Hitler was rabidly antisemetic and this was his first ‘official’ act against the Jews on this scale. It took place in Germany, Austria and the Sudetenland in Czechoslovakia where German troops had been sent.

Members of the Sturmabteilung entered homes, hospitals and synagogues, demolishing them using pickaxes and sledgehammers. After causing as much damage as they could, they started fires to cause maximum devastation. Approximately 1000 synagogues were destroyed and more then 7000 Jewish businesses were wrecked or damaged to the point that they couldn’t open again.

In addition to the loss of buildings, many Jews themselves were killed. It was originally thought that 91 people were dead as a result of the attacks (as recorded at the time). However murder wasn’t the primary objective of what Hitler’s soldiers did over the course of the 2 days, instead they forced people to carry out humiliating acts and there are records of many rapes happening. Because of this, there were so many suicides that it’s thought that the toll on life could be in the hundreds. Fear, chaos and devastation were at the core of this act of hatred against Jewish citizens.

Part of the instruction handed out by Reinhard Heydrich as head of state police was that as many men as possible should be rounded up and arrested. 30,000 Jewish men were arrested, held in prisons and then transferred to concentration camps. At this time, Buchenwald, Dachau and Sachsenhausen camps were already running and they found themselves held there.

While most of the Jewish men were released from the concentration camps on the proviso that they leave Reich territory, many hundreds died before they had this opportunity.

Goering wasn’t happy following the break up of Jewish property as he felt that German insurance companies would have to foot the bill for repairs/compensation. So to stop this from happening, he brought in laws to remove Jews from the German economy. Further laws were then brought in which made it illegal for Jews to own property, made it illegal to hire Jews for work, required Jewish people to sell their businesses to “Ayrians” for a pittance and demanded the expulsion of Jewish children from schools.

Kristallnacht needs to stand as a lesson. When people say right wing policies are harmless, they need to remember how easy it is for things to be taken to ‘the next level’ and say NEVER AGAIN!

2 thoughts on “Kristallnacht – Lest We Forget”