Far Right one-time former Labour candidate Anne-Marie Waters, too toxic even for UKIP and Nigel Farage to stomach, has set up her own neo-fascist political party called the ‘For Britain’ party, which has been compared by many people to the BNP.  Long-term Islamophobe Waters has, with the assistance of former BNP extremist Jack Buckby, expanded from the narrow anti-Muslim agenda of anti-jihadism to openly embrace white supremacist ideals. Waters has become Fuhrer of her own froth, tweeting about how she believes the white race is being “destroyed.” This policy endorsement is intended to appeal to the wide alt-right movement, and to all those who seek unity between different sectors of extreme right politics.

Waters and ‘For Britain’ have booked a fundraising meeting in Pontefract on Sunday November the 18th (2pm to 5pm) which several EDL hooligan thugs have promised to attend, Pontefract is a white working class former mining town which Waters hopes will warm as a collective to her all-new pro-white agenda borrowed from the BNP and National Front.  Joining her in the For Britain party, is Tommy Cook (AKA Tommy English from the EDL’s former LGBT Division), who is rallying racist troublemakers to attend the Pontefract push.  Cook is a member of internet extremist hate group #Bluehand, run by a reclusive James Bond fantasist. 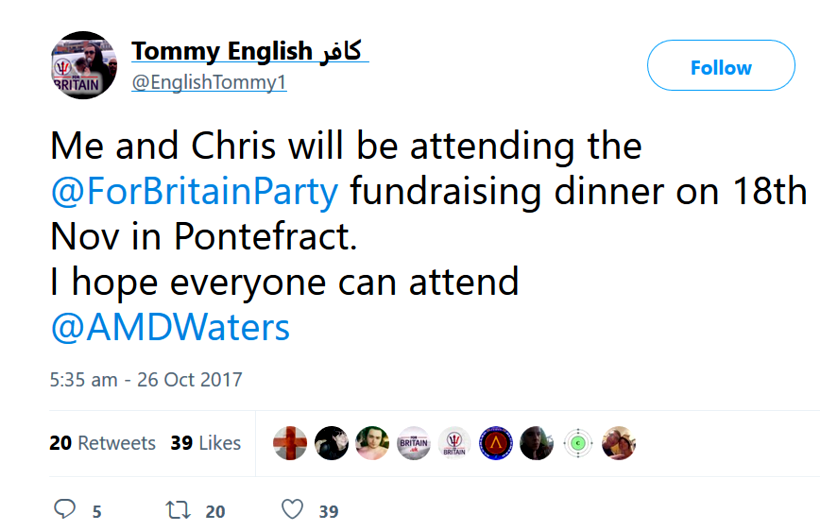 She further elaborates about an imaginary “plot to wipe out white people”: – 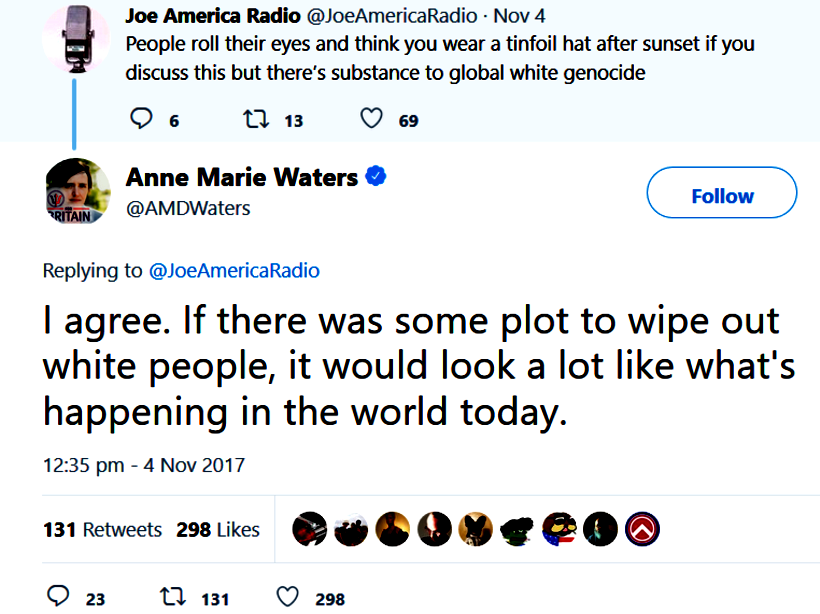 AMD Waters tweets publicly about an imaginary ‘war on white people’ which received an enormous 3295 likes, a tweet which has gone down well with supporters new and old: – 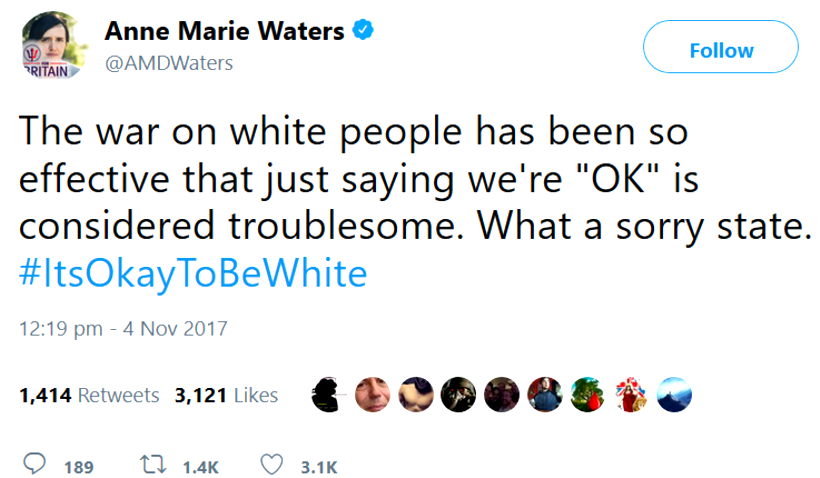 ‘White Genocide’ theory is key white supremacist propaganda, linked to supposed theories of global domination by Jewish bankers i.e. George Soros. These are deliberately concocted lies which an increasing number of Islamophobes both in the UK and the USA are spreading across the web. Like the American ‘White Lives Matter’ movement, the idea that white people are being ‘exterminated’ by dark ‘globalist’ forces of the New World Order is propaganda designed to rally angry, disillusioned working class people from economically disadvantaged communities such as Pontefract, Durham, parts of the Lincolnshire, Essex, the South Coast and the Midlands, into voting for her in future elections.

The ‘White Genocide’ conspiracy theory first appeared in a pro-white pamphlet written for Adolf Hitler’s ‘Research Department for the Jewish Question’ of Walter Frank’s Reich Institute with the title: ‘Are the White Nations Dying? The Future of the White and the Coloured Nations in the Light of Biological Statistics’.

Some of the supporting white supremacists who approved of Waters’ comments, are South African. The manifesto of far-right terrorist Anders Behring Breivik entitled 2083: A European Declaration of Independence devotes an entire section to an alleged genocide against Afrikaners. It also contains several other references to alleged persecution of whites in South Africa.  Mike Cernovich, an American alt-right commentator has previously stated that “White genocide in South Africa is real”.

However, Africa Check, a fact-checking organisation has rejected the claims as false: They state in fact that: “Whites [In South Africa] are less likely to be murdered than any other race group.” Africa Check reported that while white people account for nearly 9% of the South African population they represent just 1.8% of murder victims.

Whilst she is unlikely to gain either parliamentary or European (Brexit depending) representation, Waters will be seeking to follow the path of the now fragmented BNP, in gaining votes in council elections and using this platform to breed ignorance among the white working class to create further support for her extremist views.  (At one time, the BNP alarmingly held over fifty council seats. It eventually lost them all, as the party collapsed due to infighting between pro- and anti- Nick Griffin factions. ) The measure of success for ‘For Britain’ will be inevitably compared to the fortunes of the BNP, the success of which Waters hopes to match in her quest to become a nationally renowned figure like Nick Griffin.  For Britain will be relying on the power of their EDL support come election time, if her “For Britain” party is not to flop like a damp squib in the manner of equally hateful far right party Britain First.

Britain First has now been officially deregistered as a political party by the Electoral Commission.

Buckby being a former organiser of Gavin McInnes’s chauvanistic alt-right Proud Boys, Waters will have to consign her self professed love for the Suffragette movement to the dustbin.

The long-term failure of the British far right is arguably due to the inability of the disparate parts to agree on common terms and whether the focus should be anti-muslim, anti-Black, anti-semitic, Holocaust deniers or conspiracy theorists.  There are plenty of groups saying different things.  The over-emphasis upon hating Muslims, has overshadowed other more traditional prejudices to the extent that many of the older, ex-BNP and National Front figures now feel marginalised by the EDL “cocaine and Stella” brigade, who they resent for “dragging British fascism down the gutter” (as if it was not there, already!)

The general feeling at the meeting was that if British extreme right politics are to survive post-Brexit they need to broaden the focus so as not to leave the older booted and suited bonehead generation out in the cold.  Whilst the London Forum have apparently (according to Hope Not Hate) given the nod for Mark Collett to set up his own party, others who attended this conference undoubtedly see a brighter future with new face for the far right ballot box – Anne-Marie Waters who doesn’t carry the baggage of Nazi Boy Collett. (Collett has suffered more than one videotaped humiliation over the course of his egotistical lifetime.)

Whilst the EDL have, on the whole, steered clear of KKK-style politics, preferring to march up and down car parks chanting “Allah Is A Paedo”, the consensus at the London meeting felt the only way British fascism could return successfully to electioneering would be through copying some, if not all, the tactics of America’s alt-right.  Whilst Pepe memes and nerdish gaming subcultures would fail to make an impact with working class white people, a revival of the old-fashioned, pro-white campaigning, mirroring Trump fans ‘white lives matter’ ideals would begin to get results, and help to unify the British far right behind notable leaders.

If Anne-Marie Waters has successfully managed to connect with the hardcore white supremacists and Holocaust deniers who filled the Traditional Britain Group meeting, her Twitter endorsement will be the proof of the pudding.  So far, her white genocide tweets have been liked and shared by thousands of people outside the EDL subculture, with replies featuring calls to ‘remove’ Jews, tirades against black Africans, deadly calls for starving Africans to be stopped from “destroying the white race” and everything else you would expect from old-school BNP supporters latching onto the AMD Waters ticket.  One Neo-Nazi simply tweeted the direct call for “white power”. 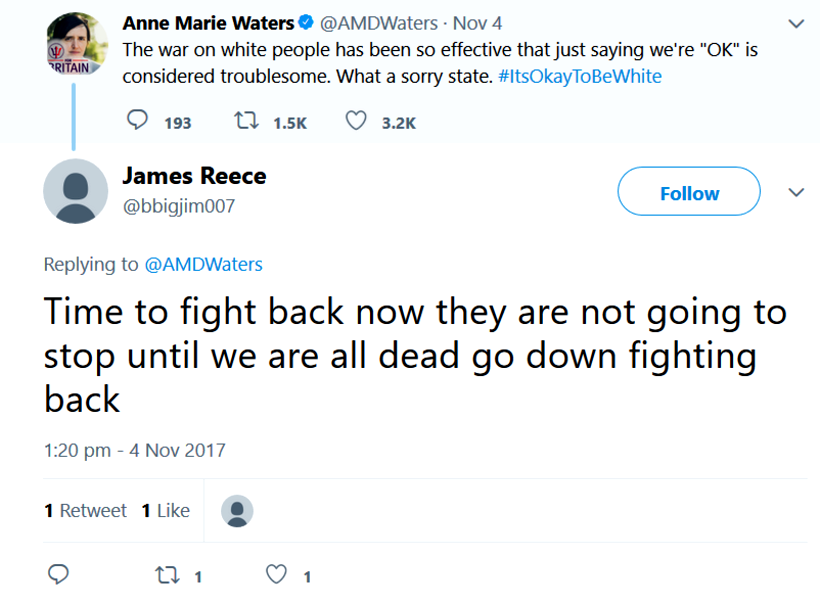 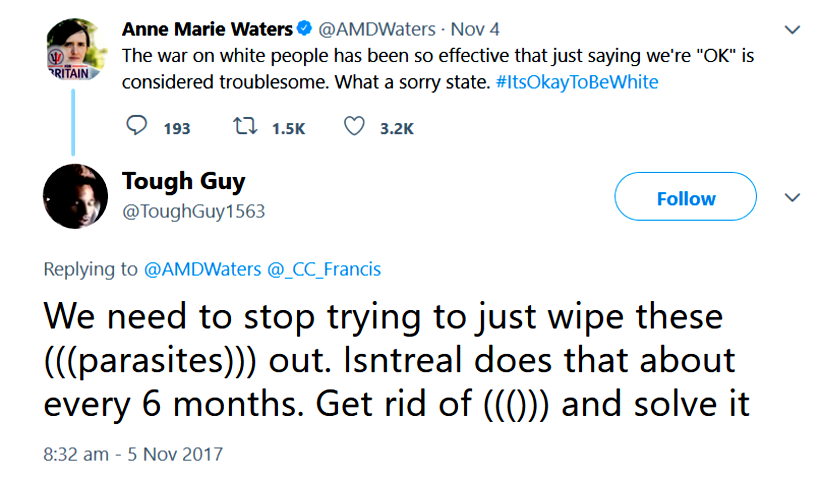 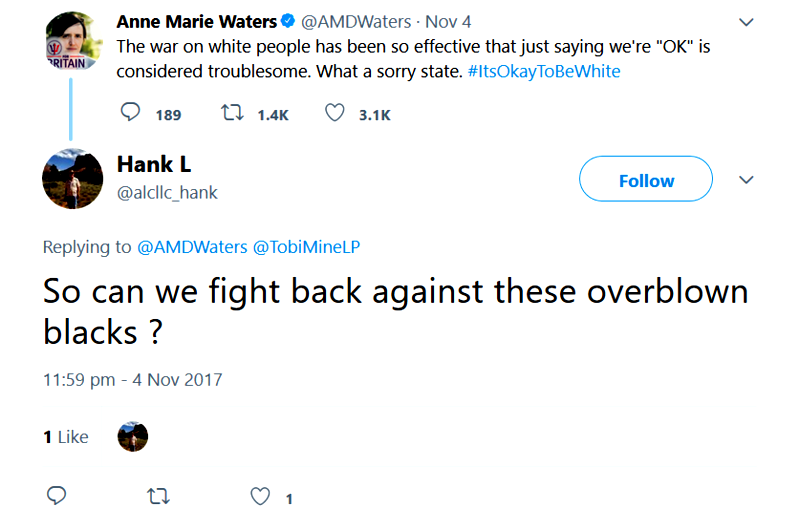 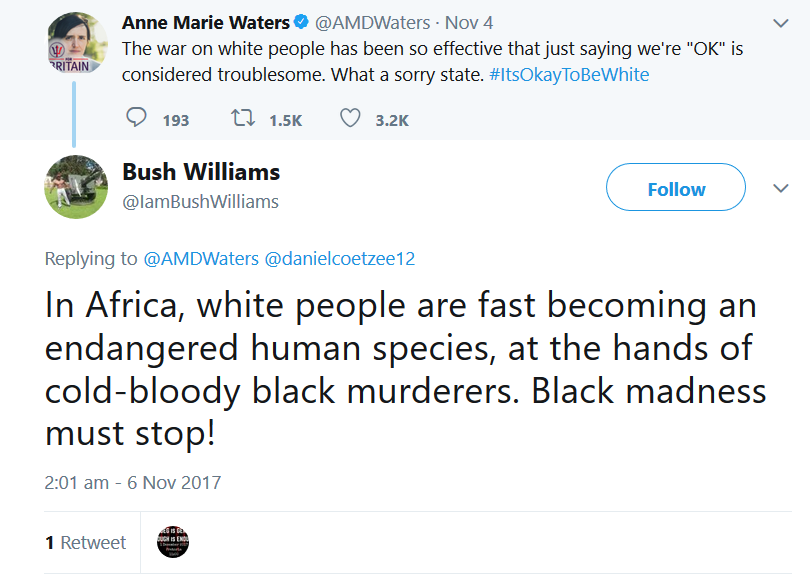 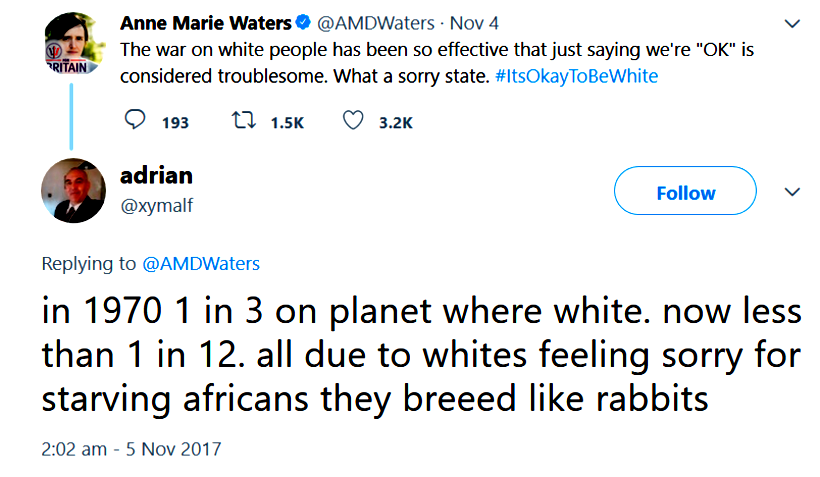 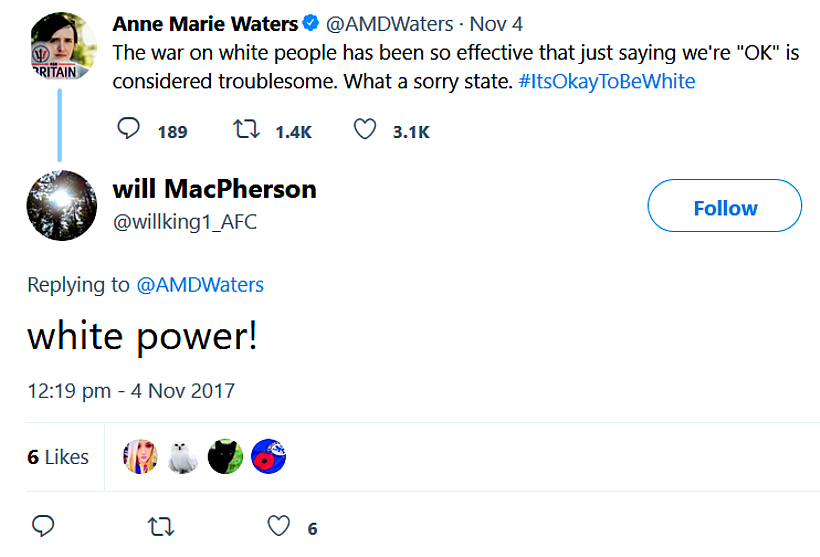 AMD Waters assistant Jack Buckby was quick to add that he was “proud to be white”, although he failed to mention whether he was proud to have been booted out from university in Liverpool for being a racist idiot. 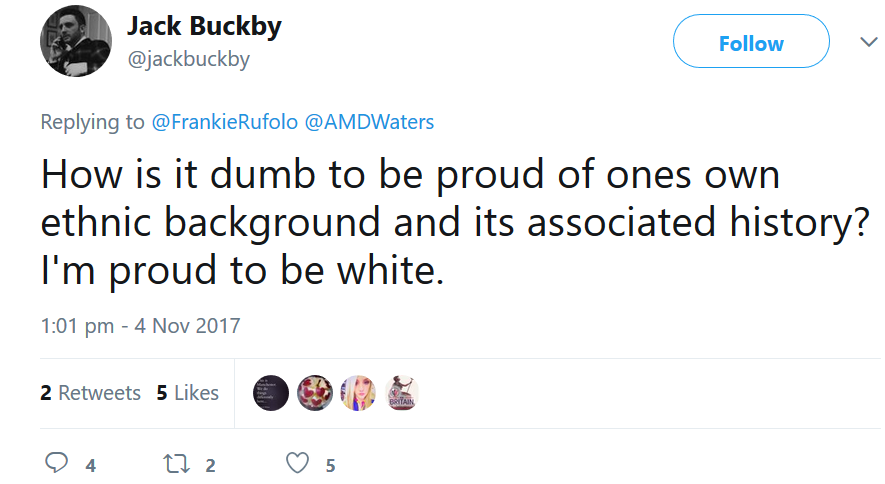 Whether Waters will become the next Nick Griffin, nobody knows.  One thing is certain though, with Old Nick’s protege Jack Buckby on-hand to direct policy, EDL thugs invited to party launches, and the more extreme UKIP trolls switching over to her camp, she is going to try to take hatemongering forward through local elections.

‘For Britain’s’ politics are for Nazi Germany, not Great Britain.