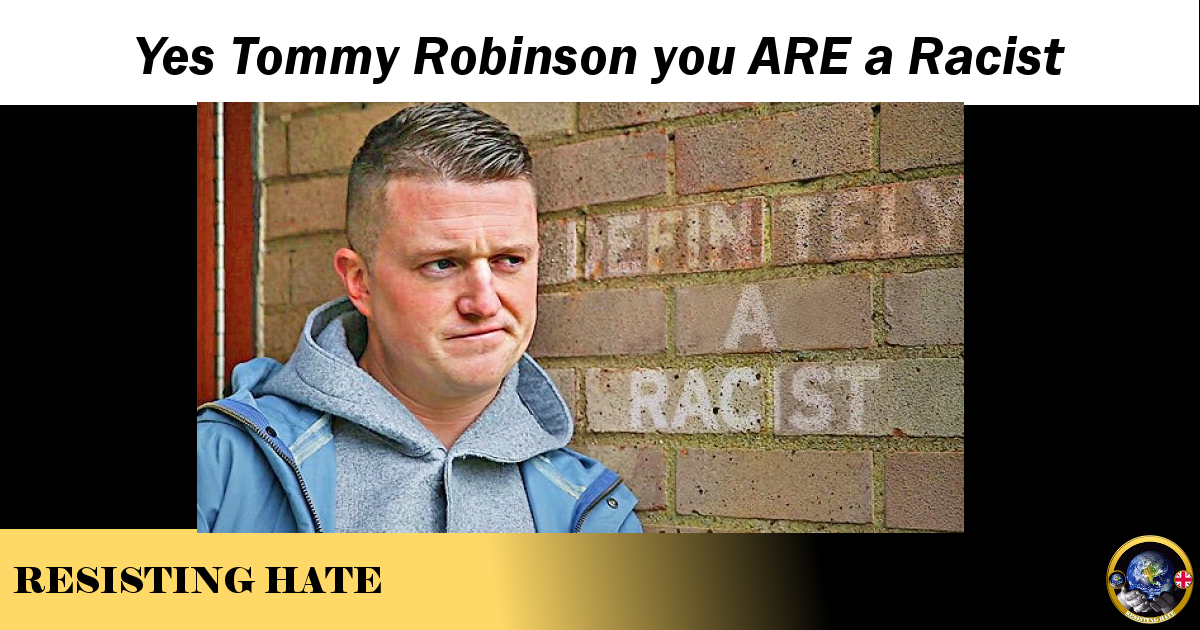 Tommy Robinson would have people believe that his hatred of Muslims has no association with race. This is echoed by his followers who spend their days on social media furiously texting the same phrase over and over again: “Show us proof that Tommy is a racist. Show us one racist thing he has said.”

In order to disprove Tommy’s delusion that he is not a racist and to educate the followers who believe his rhetoric, I have pulled together clear proof that Robinson IS a racist.

Robinson’s political background began with membership of the BNP in 2004. The British National Party is a racist party that openly stated in its constitution: “The BNP stands for the preservation of the national and ethnic character of the British people and is wholly opposed to any form of integration between British and non-European peoples. It is therefore committed to stemming and reversing the tide of non white immigrants…” So Tommy’s first venture into the political scene was to align himself with a racist party.

Tommy then went on to co found the English Defence League which claimed to be an anti Islam party but which 74% of the public viewed as being racist. Certainly footage of key EDL figures advocating: “Send the black cxxxs home” would support the claim that Robinson had founded a party steeped in racist attitudes. The co-leader of the EDL Kevin Carroll was arrested for race hate crime.

There are plenty of pictures showing that Robinson is happy to associate with racist Nazis.

Tommy’s racist career continued when he joined the British Freedom Party which hit the headlines when a member tweeted out support for murderer Anders Breivik (who openly identified as a Nazi). He then went on to support Pegida UK whose founder Lutz Bachmann was convicted of racism and who was accused of calling refugees “cattle” and “filth” on social media.

Like most of the far right, Robinson attempts to avoid being racist by defining racism in the narrow sense of prejudice against skin colour. He takes the occasional photograph of himself with a Black or Asian person (ironically this ‘tokenism’ in itself is racist) and claims it invalidates any accusations of racism against him.  But racism has a broader definition. Cultural Racism embraces prejudice against culture, clothing, beliefs and attitudes. Tommy’s obsession with Islam, Islamic culture, Muslim dress and refugees fits this wider definition. There is plenty to suggest Tommy is racist in the original and literal sense of the word but he is also a racist in the wider context of the term.

From his inauspicious beginnings Tommy Robinson emerged as a pseudo political figure with a strong alliance to racist groups and organisations. He has also regularly proven himself to have significant personal racial prejudice:

The footage below shows Robinson referring to Asian Taxi drivers with use of the ‘p word’ as a racial slur in an online rant:

This social media post shows Robinson describing himself in a club using a clearly racist metaphor:

Tommy claims to be all about opposing ideology instead of race but here he is very clearly mocking physical racial stereotypes.

Tommy refers to a Somalian journalist as a ‘Black Skeletor’

Tommy making jokes about how he thinks people from Pakistan smell

In the video below (put together by Momentum) Tommy makes the following racist statements:

After his public comment “I guess it’s ok to rape white women then,” in reaction to a leaflet from a rape centre specialising in support for Black, Asian and Minority Ethnic women, Tommy turned a blind eye to the racist abuse the rape centre received by his followers. Not just content with holding racist views, Robinson clearly demonstrates an intention to incite and foster racism in others.

Tommy tells a person of colour to “Fuck off to Africa.”

Time and time again Tommy refers not to the Islamic religion which he claims to oppose but to the people of Pakistan and the Pakistani culture. This is racism. Simple, blatant racism.

Robinson started out as a racist in a racist party. He quickly realised that fighting Islam would be a way to spread his racism to a wider audience. He substituted the word ‘Muslim’ for the P word and embarked on his journey of hatred and racism, giving his followers a ‘legitimate’ way to be racist without censure.

Robinson attempts to convert people to his agenda of hate by claiming he merely opposes Muslims and that this is nothing to do with race. But when the mask slips it is clear that Robinson’s motivation is not opposition to a religious ideology but a deep seated racist hatred of people he does not deem British or English enough to share the country with him.

So yes Tommy Robinson, you are a racist.

5 thoughts on “Yes Tommy Robinson you ARE a Racist”