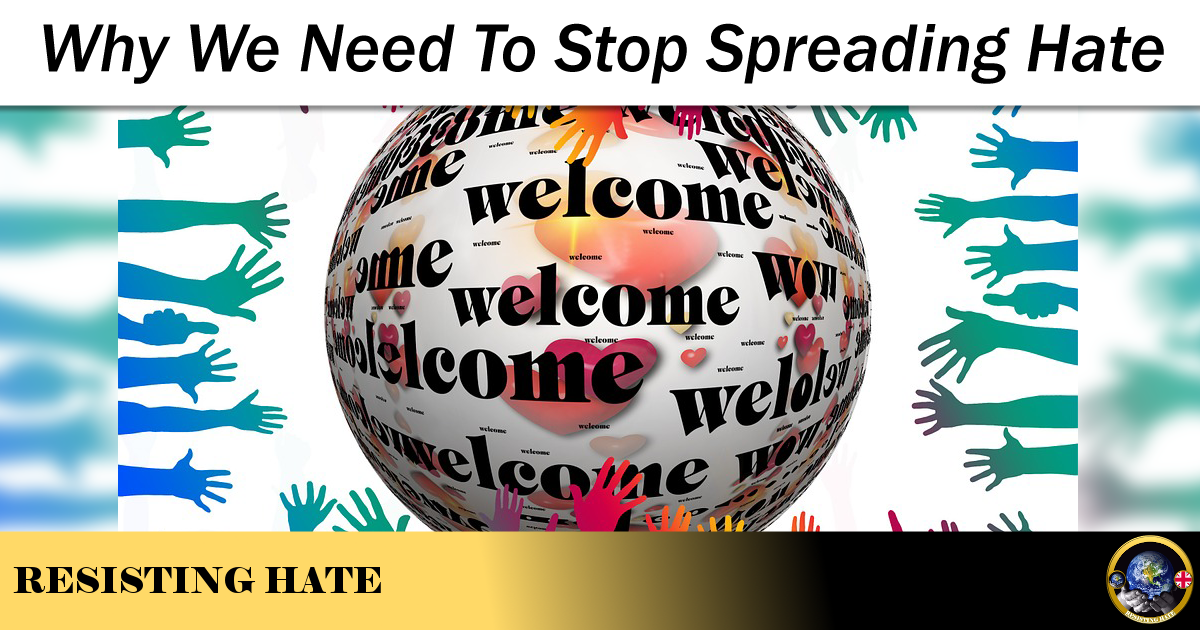 A guest writer for Resisting Hate

It is hard not to notice that there are a lot of groups and messages of hate around today. There is a link between this hate and the increasing abuse and violence. Hate breeds hate, breeds more hate…

As most of the hatred I see and hear about is primarily aimed against Muslim people, I will mostly focus on that, but the sentiments in this article are equally applicable to other persecuted groups and individuals too, including immigrants, other races, different cultures, minority faiths, the poor, the disabled, LGBTQ, transgender, the homeless and many others. Sadly the list is long.

Much of this abuse and hatred is perpetrated by people or organisations claiming to be patriotic and who claim to help society. But their actions and words are not patriotic and in truth they are actually doing harm to our society. When haters do what they do they make the job of the police, the military and the emergency services so much harder. They are putting our services, our communities and our loved ones in harm’s way. Each message of hate contributes to inspiring every act of abuse and violence that endangers the safety of groups and individuals.

Allowing hate to divide our communities is playing right into the heart of terrorists. It contributes to their long term aims of chaos and disorder. Reactionary bigots who spread hate are helping to accomplish one of the terrorists major goals, namely to divide and conquer.

Every hater who demonises an innocent individual is contributing to the risk of radicalisation. Some of these people being radicalised are adults, some are teens but for children growing up being exposed to hatred, the influence is massive. Hate is the perfect recruitment tool for terrorism – See, they do hate you, they do hate your family and they hate your God.

Each act of hatred means another serviceman or woman has a much higher risk of being killed. And not just service personel but the person in the street too. Each of these hate acts puts all of us at a greater risk of being involved in an attack.

Hate crimes negatively impact on resources for policing, the emergency and medical services and society in general. As we approach a winter that will put massive strain on our NHS we simply do not have the additional resources to put into the inflating issue of tackling hate crimes. The repercussions of hate are further reaching than is first apparent.

With each abusive message or violent act haters further alienate the very communities whose cooperation is vital for intelligence and the support to combat it all. Community support and assistance is crucial in the fight against terrorism.

The spread of hate plays a pivotal role in the growth of terrorism. Without hate as a reaction

Put simply terrorists want haters to do their jobs for them and keep pulling the country apart.

So to those who align themselves with hate groups, those who act with violence or abuse and those who post messages of hatred, YOU are assisting terrorism. And YOU are causing further harm to your people and your society.

This is not patriotism. You are weakening the very country you claim to serve.

Of course, stopping the hate will not stop terrorism or violence immediately. We have a lot of bridge building to do first – gaining trust and becoming more inclusive, welcoming and supportive to others. And there are some (on all sides) who are just ignorant and will always stay spoiling for a fight. But, over time if we can change our culture to be one of respect rather than hate the divides will heal and our united communities will succeed together in the fight against terrorism.

We need to be brave

One thought on “Why We Need To Stop Spreading Hate”