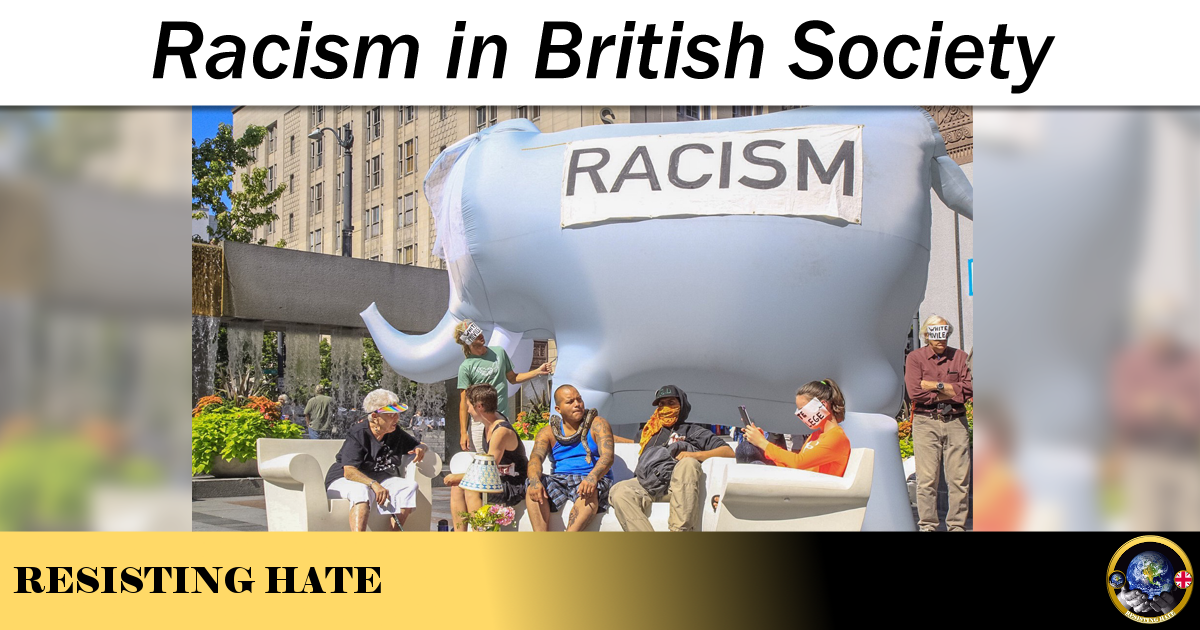 Powerful piece on racism by a Resisting Hate guest poster

I am a black British born man, 50 years old with Jamaican born parents who emigrated to Britain in the 60s and have lived here ever since.

I was warned by my parents that due to the colour of my skin I would never be truly welcomed and accepted as an equal to a white British born person.

Thankfully I have managed to form friendships with white people and even Indian people but I always feel more conscious of my skin colour than I should and even more so when I happen to be with a white person. It is as if I have been conditioned by an unjust system that is set up to make people feel insecure about their skin colour or nationality. The fact that racism is still thriving after so long and that people continue to feel inferior or superior
as a result of skin colour must, to an extent, be due to society intentionally keeping in place a system which molds individuals minds in a negative and prejudiced way.

A couple of weeks ago I read a newspaper article about a model who happens to be black and she was convinced that she was made to feel undervalued and unwanted when photographers openly shouted at her to get off the catwalk. It is sometimes said that black people are too quick to accuse white people for making them feel uncomfortable and inferior but if you stop and imagine a white model being shouted at by photographers to get off the catwalk – what are the chances of that model not feeling upset and even humiliated? I would say it is a certainty that she would feel humiliated and embarrassed and perhaps even moved to tears.

But would she say that she was treated badly because she is white?

I’d say that is highly unlikely because most people know that though there are models of all races it is always the white models who are given the best opportunities whereas the non white models tend to be left below to look up to the white models at the top of the profession. This has been the case since the modelling business began.

It is as if the people who manage the modelling industry are so self centered and selfish that they cannot understand how their non inclusive practises have made many people of color feel excluded unwanted, unappreciated and undervalued.

This practice of taking certain people and putting them on pedestals in the modelling, film and music industries has effectively created an elitist hierarchy of people who have a over inflated opinion of themselves. The more their egos are stroked by seeing pictures of themselves plastered all over the place the more they start to forget that they are flesh and blood with a limited life span and no better or worse than anybody else.

When a non white person tries to reach the elite of the entertainment industries they are are more likely to find that there is a reluctance because society has never been given the opportunity to look up to and admire non white people. Throughout history black people have always been depicted as subservient to white people and they had to fight hard for many many years in order to be given equal rights (especially in the USA).

I believe that one of the reasons why black or non white people continue to feel like they are still at the back of the queue is because the people in control, who are nearly always white, don’t really want them to feel equal or valued.

One thing I have learned about human nature is that people are always fighting to gain control. Yet when I think about it, at the end of the day, we all have the same basic needs and whether a person is black, white, short, tall, fat, slim, able bodied or disabled we all face the same outcome at the end of our lives.

This begs the question in my mind as to what is the true reason for racism and how did the delusion of believing that one is superior and inferior according to the color of their skin come into being?

The fact that racism still exists in the 21st century suggests to me that some people must want it to thrive because they want to hold onto the delusion of superiority. Being able to keep certain groups of people down gives elitists a feeling of power and fear of losing this power inspires them to perpetuate discrimination of others.

You can see the immense harm that racism and delusion and greed has done to human society.

And although people speak out against racism it is never quite enough to wipe it out for good.

I want to be clear that acknowledging that racism has no place in society is just the beginning. There is so much more that is wrong with British society in the 21st century but people lack the courage to admit this and to encourage others to change society for the better.

Some believe that if we manage to get rid of racism it is job done…but it isn’t. British society has not even begun to address its problems properly. It merely pays lip service to them and that is why British society continues to be troubled and divided in just about every way known to man.

It’s is depressing. But the power for change lies in our hands.

2 thoughts on “Racism in British Society”