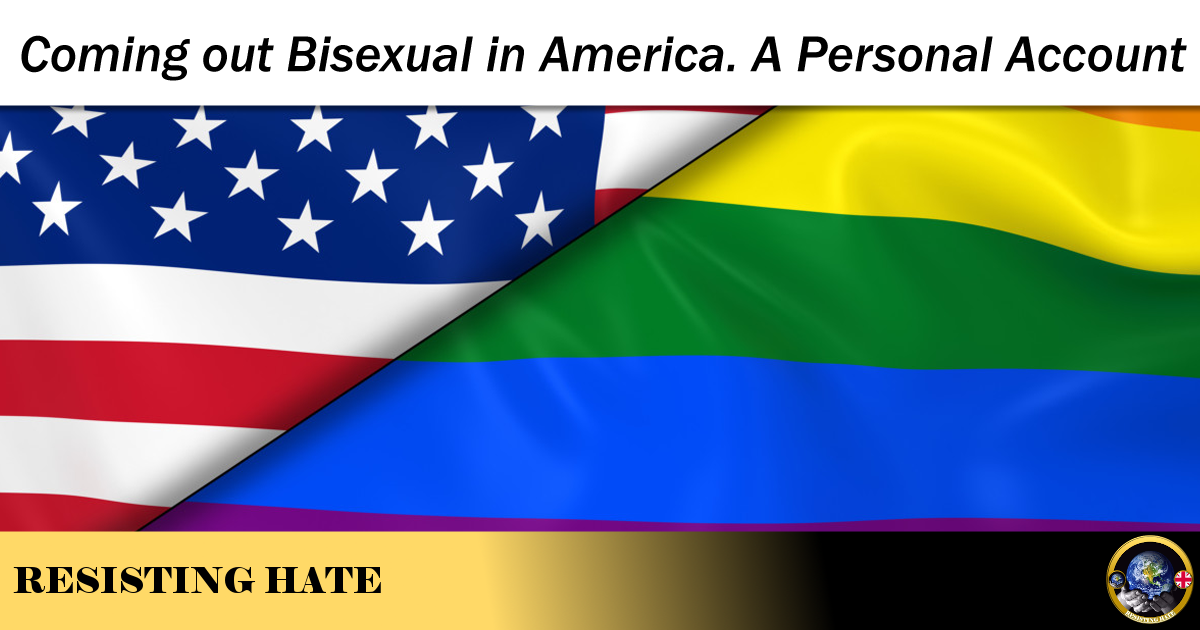 A Resisting Hate member discusses her challenges in coming out as Bisexual.

I always knew I was attracted to women physically. I used to sneak my friend’s dad’s Playboy magazine in the bathroom but that was the 80s so it was NOT socially acceptable.

I had fallen in love with men and had a very difficult time getting along with women so I realized that I wasn’t straight or gay but I didn’t know bi was an option.

I was a beautiful, feminine, brilliant young woman so men hit on me all the time but when I was in college I experimented for the first time with a woman on vacation to Florida.

When I went back to college, I had a woman become very obsessed with me so we did a three way with a guy who was hot for me. I did that because I felt it was the safest way to experiment without committing to one life style or another. She got very stalkerish and creepy and it freaked me out a bit.

Well, that story got out and I was in a very prestigious sorority. I was ostracized and shunned.

Then one day I was in a class and I saw someone write on the desk, Elyssa is a dyke. I was horrified. My secret was out. How could I ever face the world again?

I was a lipstick lesbian in the fact that I was not attracted to butch women at all so this was all very confusing to me when I went out to gay bars because I didn’t find the kind of women there attractive.

Since I knew my attraction to women was primarily physical  (I enjoy physical rather than emotional relationships with women) I found my own sexuality very confusing. I quickly retreated back into the safe cover and world of heterosexual relationships.

When I moved to NYC to do my first Masters degree at Columbia I thought – Wonderful! I can experiment with my sexuality in a more accepting environment without being shunned and call disgusting by my very judgmental sorority sisters!

But I was wrong. One sorority sister in particular (my best friend at the time prior to her cheating with my love in college boyfriend who she later married) cut me deep to the core. And to this day, every time I see her post on Facebook I remember the horrible things she said to me when she found out. The film Basic Instinct had just hit the silver screen and I made the horrible mistake of seeing it with her so there was no doubt she was homophobic, and extremely vocal about it, which caused me to finally disaffiliate from my sorority. I remained friends with a few still to this day who are more open minded friends but never felt comfortable at events after that and retreated into my own world severely depressed feeling ostracized and isolated.

I still remember my sorority sister’s judgemental words every time I see her post on Facebook. To this day the majority of my sorority sisters just pretend not to know me or at least make it clear they don’t want to.

Most men can’t even please one woman let alone two. So get that idea right out of your heads.

Then one day, I was extremely drunk. And I was being harassed by some fraternity boys after leaving the G-Man, a college bar we frequented. They had apparently heard about my sexuality through the grapevine and these uptight frat boys thought it their place to call me disgusting and make belligerent and rude comments to me.

Kerry Collins (yes, THAT Kerry Collins) who I knew and went out with a couple of times was the Quarterback of the football team and very much the Big Man on Campus. He witnessed the whole thing and took me into his arms and kissed me deeply to point out that none of this made me any less of a woman or undesirable. It shut them up right away.

But by that point my friendships were so compromised I knew there was no turning back.

When I moved to NYC I thought I could explore my sexuality on my own terms. But I was not into the bar scene and it was difficult to find a partner in crime who would be my wingman at gay bars. I never quite found my footing in that Community either so eventually relocated to Nashville to do my PHD at Vanderbilt. That’s when I got my first ‘girlfriend’. She too was bi and engaged so we would hook up while remaining in a tight group of friends who were perfectly accepting.

That was the one and only girlfriend I ever had and the relationship ended once she got married but I remain friends with her husband to this day. He didn’t mind we were physically involved and in no way felt threatened by it. There were very clear boundaries and we were both drop dead gorgeous so would go to strip clubs where we would get ridiculous offers to go home with men (which we never did though we did get kicked out from a few clubs due to all the attention we were getting). Memorably, on bouncer told us, “You’re here to see the show, not BE the show!” But we had a wonderful summer that year, surrounded by friends who were mature enough to handle our alternative relationship.

By this time bisexuality had become a cultural phenomenon and much more out in the open. But still, men were always under the impression that lesbians were there for their sole enjoyment. That is NOT the case. If I want a man, I’ll find a man. If I want a woman, I’ll find a woman.

As a girly girl, I never gave much thought to the transgender issue until I came across it around the time Caitlyn Jenner transitioned. I have several friends who have transitioned. You would NEVER know and I was shocked to find out. But just as it is important to lend my white privilege to empower minorities, I am using my voice to back the T (trans) as they are currently under attack from the far right who think they and I are going to Hell for not confirming to their narrow minded view of the world.

My sexuality was not a cognizant CHOICE that I made, but rather something I was born with.

I am beautiful, brilliant and educated and none of this changes because of my sexuality.

Gender and sexuality are both fluid. I feel like I missed the latest installment of the sexual revolution by maybe five or ten years but my adolescent and college years would have been so very different if my friends had been more accepting and had kept their fùcking mouths shut when I was going through the self discovery process. I regret that my experience was somewhat limited but glad that my ‘inner circle’ now knows and accepts me for exactly who I am.

It was incredibly painful and confusing because I never felt safe discussing my sexuality with anyone until recently but now I feel it is important to get this out there as I know many people have children still held to exceptionally rigid and unattainable standards in relation to sexuality. Children are taking their own lives and still experiencing the kind of pain I did when I realized I could do or become absolutely anything except a typical average housewife and mother.

Please allow your children the freedom to be who they are without judging them.