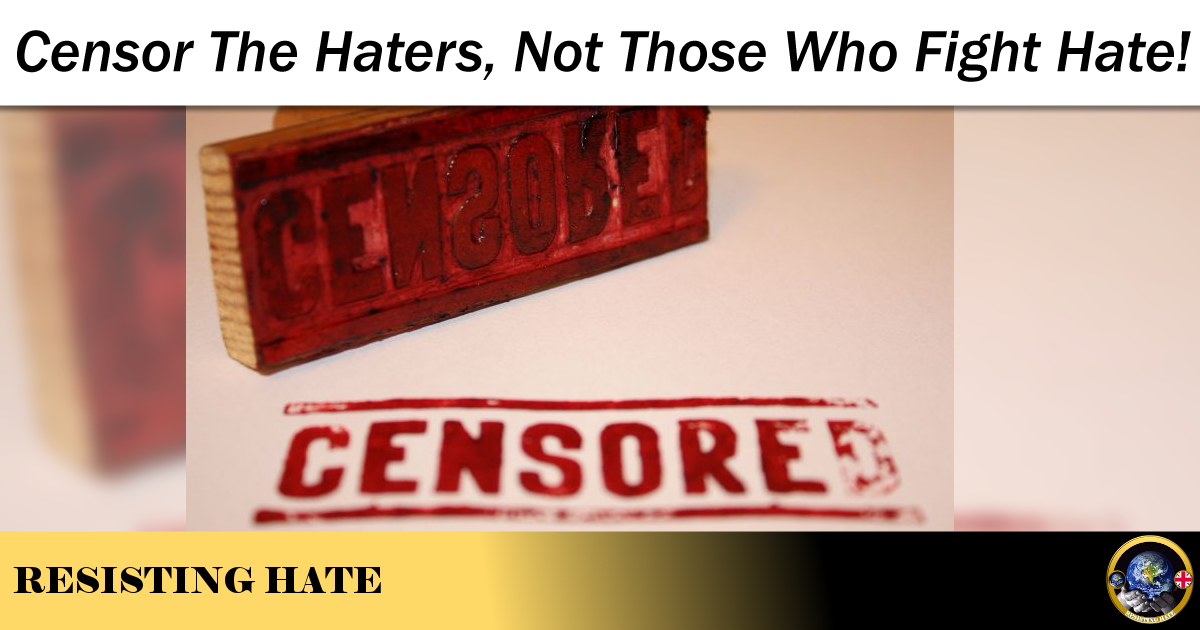 Censorship is not limited to keeping something from being spoken. The definition also stretches to include writing and exposing the truth. The whole concept of censorship is becoming a big problem on Social Media sites such as Twitter and Facebook where those who seek to expose haters are censored more than the actual haters themselves.

Twitter, in particular, is becoming notorious for censorship. Lately Twitter has been found suspending accounts who are exposing Racism, Xenophobia and Islamophobia. But the accounts carrying out these sickening hateful tweets – Twitter refuses to suspend. Racism, direct threats of violence and Islamophobic tweets inciting hatred cause no harm as far as Twitter is concerned.

I myself have been a victim of this so called censorship. I had the misfortune to encounter Twitter user @SergeantFrisky (aka Jonaya) – a far right supporter, who supports Far Right hate preacher, Anne Waters (leader of far right ‘For Britain’ Party.) This user abused me, used foul and threatening language toward me and encouraged her Facebook followers to mass report me. Yet Twitter said no harm done!

Jonaya, is posting tweets that are clearly inciting hatred against Muslims. But it was my account that Twitter chose to suspend.

It was the fighter of hate not the hater who Twitter censored from their platform.

Jonaya has openly bragged about having my account suspended on her profile and I quote:

@SergeantFrisky: “I’m back. And last night, I got the person who claimed to have got me banned permanently suspended.”

Now, this is not true – not once have I claimed to have had her account banned permanently. I have reported other accounts, one being hater @BasedBritish which I reported and then shared when it was finally suspended. (Incidentally he has created several more accounts since which Twitter have neglected to take action against.)

I will not let an account suspension deter me from exposing the truth. I search the net and find these far right accounts on other social media platforms and I expose the people behind them. I have a good long list that I am currently working through and I am committed to bringing haters to justice.

The Far Right claim people like myself, are censoring them, but that is hypocritical. The censorship is happening to those of us brave enough to stand up against hate and to take action to fight it. No matter how often Twitter makes claims in the press about wanting to remove hate from its platform it is ironic that the accounts it does choose to suspend are those working their hardest toward this very aim.

US President Donald J. Trump, has made false claims on Twitter which incite racial hatred. Twitter has OPENLY said that they will not be deleting his tweets. This is a man who claims fake news is destroying America. Yet, he is openly spreading fake news himself. When groups like ours expose the truth we are told: “You have violated our rules. Your account is locked/ Your account is suspended.”

When I complain of censorship, this is the crap I’m talking about. One rule for one, another rule for the other.

Interestingly Jonaya wants a career in the law profession. It is surprising she should be so open with her Islamophobic and racist views, when she wants to pursue a career in the Law.

This paints a very dark picture of the kind Solicitor she’d be, a corrupt and dangerous one. One who will twist facts, create tissues of lies and censor others to get the results that she wants. She is a calculating liar, she knew exactly what she got banned for but she played the victim of censorship.

Yet while publicly moaning about being censored the hypocritical Jonaya was working to censor others by trying to get my account and the accounts of other Resisting Hate members banned. She has been trying to censor me ever since I first exposed the truth about her. I exposed her support for a Party Leader, who has links to far right violent movements across Europe, her links to a known hate preacher and her links to political hate group Britain First (led by a leader who is currently the subject of a criminal investigation and awaiting a three day trial.)

This is just one example of the far right are launching an attack on the right to oppose their hatred. They want us censored because we speak the truth. They want to spread their bile and prejudice unhindered by the likes of us who stand up for and defend persecuted individuals and communities.
Their version of truth is in poor taste, and only fools are dumb enough to believe it.

Censorship is a weapon of the far right. They hate truth even more than they hate Muslims and Jews. Yet when they post their hate Twitter continue to say no harm done. And when we report them and flag up their anti-Islam tweets – it is us who receive the punishment.

Years ago, Censorship was never a problem. We could express our views – within reason of course, – without fear of being hounded by a pack of rabid wild dogs. But now censorship has become a very dangerous weapon which needs to be addressed and fast. The Far Right are censoring the truth, which will lead to dangerous repercussions for minority groups and for those seeking to defend them.

If we do not act soon to ensure those fighting have an open platform to speak on, censorship will have done so much damage it will be too late to repair the damage the Far Right and their hate have caused.