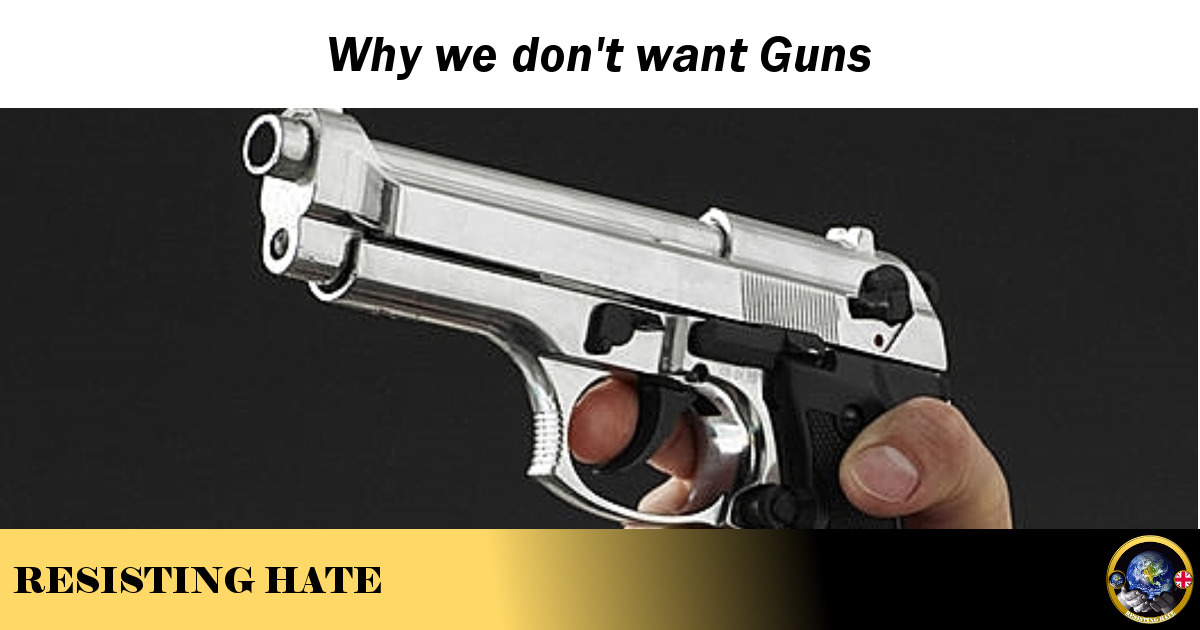 This article was written on the 5th June 2017, two days after a terrorist attack in London in which 7 people were murdered and dozens more injured, many seriously. The inspiration was a series of messages, written by Americans, claiming that if police and civilians in London had had access to guns they would have been able to stop the attack from happening.

Do you notice we are not having a gun debate right now? That's because they used knives and a truck!

Since starting to write this piece, there has been a mass shooting in Florida, 5 people were killed by somebody who had been sacked from his job, the gunman then killed himself. It’s impossible to avoid the irony of the situation.

Gun Control in the UK

Firearms have been progressively more controlled for almost 100 years, the first licensing requirements being introduced in 1919. As things stand, almost all handguns are illegal (legislation introduced following the Dunblane school shooting in 1996) as are automatic or burst fire weapons. Shotguns and hunting rifles are legal, though a permit is required to purchase them and/or the ammunition.
Northern Ireland has less restrictive rules, and handguns can be owned and carried, though there too all weapons must be licensed and owners are not permitted to bring them into mainland Britain.

Gun Control in the US

The US has a myriad of conflicting federal and state laws on gun ownership, some states allowing concealed carry, others not. Permits and background checks are required in some circumstances and not others. The general principle is outlined in the Second Amendment to the Constitution, added in 1791 (and actually based on the 1689 English Bill of Rights) which states

“A well regulated militia being necessary to the security of a free state, the right of the people to keep and bear arms shall not be infringed”.

Interpretation of this has been subject to many legal challenges over the years, notably whenever states try and introduce controls. There is nothing in the constitution that stipulates the arms need to be a projectile weapon. There is no reason it couldn’t be treated as many Sikhs do their religious requirement to wear a sword (yes, they’re all armed!), and carried as a symbolic token gesture.

Gun lobbyists in the USA are very organised and well funded, the most famous and powerful group being the National Rifle Association (NRA). They have so much influence that in 1996 they successfully lobbied for a change in the law so that “none of the funds made available for injury prevention and control at the Centers for Disease Control and Prevention (CDC) may be used to advocate or promote gun control.” The motive behind this was that in 1993 the CDC, who monitor and research most causes of illness and death, released a study that found that gun ownership led to an increased risk of gun deaths in the home. This new law effectively prevented research and reporting on gun death statistics.

According to a 2016 study published in the American Journal of Medicine, the USA has by far the highest number of firearms deaths of any high income developed country.
For instance, in England and Wales in the year to March 2015 there were 19 recorded fatal shootings (down from 29 the year before). In contrast the USA, which has a population around 5 times the size, had over 12,500 gun murders in that same period. There have been numerous studies worldwide which prove show that having a gun in the home leads to a significantly higher risk of being killed.

“Have A Go Heroes”

Having shown that owning a gun actually puts you more at risk, there is also the issue of training and readiness. The simple fact is that soldiers and armed police are trained to respond appropriately. Civilians aren’t, and when confronted with an armed assailant many will either freeze in panic or shoot wildly, putting passers by in even greater danger.

But Criminals Will Still Get Guns

One of the arguments for public access to guns I often hear is that criminals will still get illegal guns, so to defend themselves citizens must also have them. There is one fundamental and very serious flaw in this argument – there are no such things as illegal guns! All firearms start out being manufactured by legitimate companies. They only become illegal if they are stolen, sold to somebody they shouldn’t be or smuggled into the country. If the supply of legally owned guns wasn’t there, there’d be no guns to steal or sell, leaving only the risky business of smuggling them in. According to official statistics over 230,000 firearms are stolen every year in the USA. Of these 80% are not recovered.

Private sales are another problem. Because no background checks are required in many states, people who (for reasons including prior conviction) might not pass an FBI check are able to purchase weapons. The same is true of gun fairs, which have varying requirements for checks. There are in the region of 5000 such fairs per year in the US, and they are a significant source of weapons used in crimes..

The three men who attacked on London Bridge drove a van into people, then jumped out and started attacking them with knives. I’m sure they would have preferred to use guns, which would have enabled them to kill and injure more people, but the simple fact is that obtaining guns, especially several at once, is extremely difficult and conspicuous. If they had been legally able to buy firearms they would probably have done so, and the attack would have been significantly more dangerous as a result.

The main argument I’ve heard is that bystanders would have been able to neutralise the threat more quickly if they had been armed. As I’ve already explained this is not the case. In actual fact armed police were on the scene and had shot and killed all three terrorists within 8 minutes of the first emergency call. Imagine the prolonged stand-off that may have resulted had the attackers actually been able to shoot back.

Our police on patrol are not routinely armed. I like the fact that they don’t need to be. I like the fact that I can be confident walking the streets without fear that somebody will pull a gun on me to steal my wallet or phone.
Fear is the relevant word here. That is what these gun nuts share, and it’s marketed to them. “To protect your home and your family you need a gun”.
The NRA on their website hammer home the idea of freedom, and anybody that disagrees is an enemy, including Kim Kardashian for suggesting that people suffering mental illness should not be able to carry guns. People who disagree with sport hunting (count me in) are regarded as extremists.

I do not live in fear.

I do not need a gun to feel safe.

3 thoughts on “Why We Don’t Want Guns”