Ann Coulter is an American public figure with a legal background who regularly represents far right political views in the American media. She is the author of several books including ‘In Trump we Trust’ (written when Coulter still supported Trump as the Republican Presidential candidate.)

Coulter is something of an extremist, outspoken on her favourite topics of immigration and Islam. In the aftermath of September 11 she made a public proposal that America should invade Muslim countries, kill their leaders and convert the population to Christianity.

Some of Coulter’s most infamous quotations including the extremely racist “Congress could pass a law tomorrow requiring that all aliens from Arabic countries leave… We should require passports to fly domestically. Passports can be forged, but they can also be checked with the home country in case of any suspicious-looking swarthy males ” can be found in this article. These quotations are not isolated examples of Coulter’s extremist hate views. A quick You Tube search finds hundreds of videos of her spouting her hate rhetoric and making provocative and inflammitory comments, deliberately intended to offend.

She has been given a vast amount of media attention and numerous platforms upon which to air her views. As the poster girl for ultra Conservative Republican ideals few individuals have received more attention.

However the tide has been changing for Coulter recently. For all her celebration of Trump’s presidency Coulter has become increasingly disenfranchised with the man she so enthusiastically endorsed and this has lost her support among the President’s far right fan base. She called Trump out for his failure to build his promised wall on the Mexican border, and publicly criticised him for changing his stance on immigration.  More recently Coulter clashed with Trump over the ‘Dreamers’ program (Deferred Action for Childhood Arrivals) and published a tweet calling for the President to be impeached.

Before her views are examined Coulter cuts an impressive public figure. She is confident, smartly dressed, articulate and obviously someone who has read widely in her chosen field of interest. Unfortunately though, as soon as she opens her mouth (or her Twitter app), she is exposed as an individual notable not just for her bigotry but for her stupidity. This is a genuine tweet from Coulter’s personal Twitter account in reaction to Hurricane Harvey: 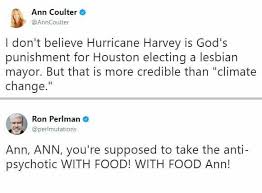 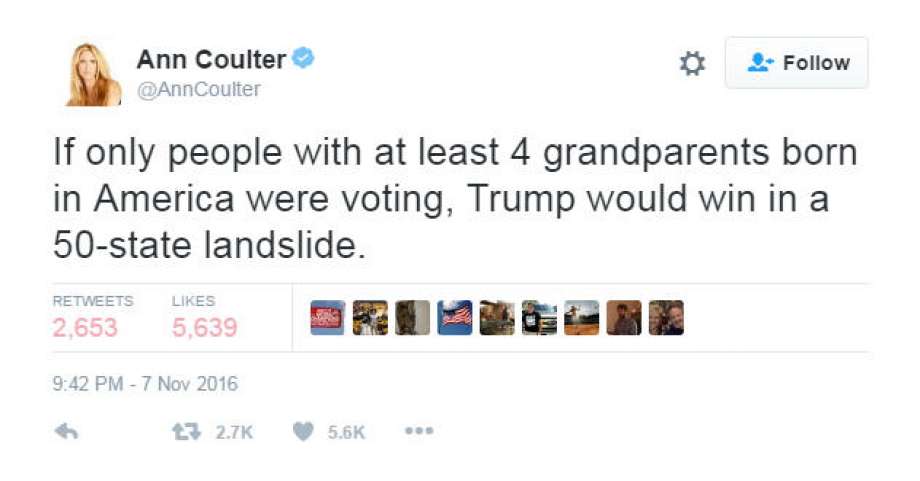 (Based on Coulter’s logic here Donald Trump, who had a German grandfather, would not even have been eligible to vote, let alone to stand for the Presidency…)

To best explain Ann Coulter to a UK audience I’d simply summarise her as a US version Katie Hopkins albeit with a bigger budget for hair. Her Twitter feed yields the same threats, rants, prejudices and hate that we have come to expect from Madame Hopkins. Let us hope that the American media tire of her vitriol and push this blowsy loudmouthed hater out of the public eye. 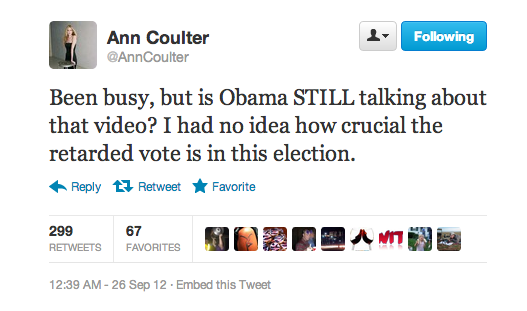 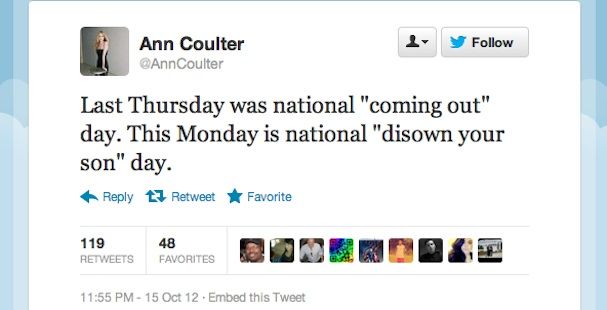 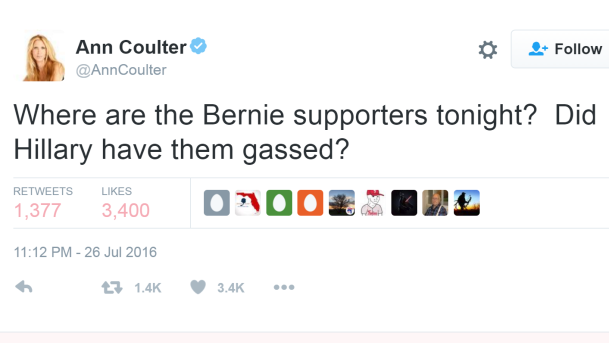 Ann Coulter hit the headlines again this week when she claimed, amid the scandal of Trump separating refugee families from their children, that the children were ‘child actors‘.