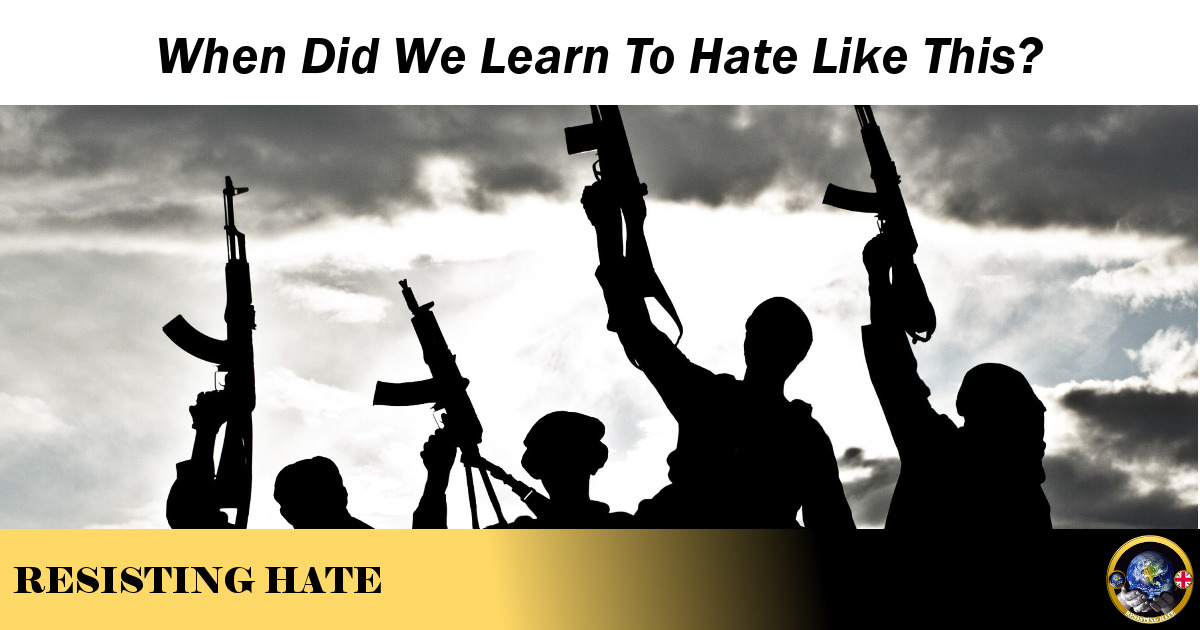 Piece written by one of our members

I was talking to my friends at Resisting Hate about contributing to their blog. I felt this piece that I wrote earlier in the year might be a good addition to the website.

I read through it again today and it finally hit me (forgive my old brain) – what online hate fighting group Resisting Hate is all about.

The reason why we did not see the sort of hatred in times gone by that we see today is the creation and growth of social media. Social media can and has been used successfully to bombard the public with foul, hate filled lies about certain religions, immigration and just about anything else that suits the political agenda at the time.

My belief is that we can fight this. We are fighting back and Resisting Hate has been at the forefront of this movement long before I signed up. I am proud to be a member of the Resisting Hate family and I hope this piece I wrote gives a few people food for thought.

My overactive brain has been mulling over the latest terror attack in London and I have a few thoughts. I grew up in the 70’s (yeah I’m that old), so lived daily with the Irish “Troubles”. I have just looked up the statistics for deaths and injury, caused by the IRA’s numerous bombings on the UK mainland. The numbers are staggering and far outnumber any of the so-called ISIS terror attacks here.

So why did we never call for the Irish to be kicked out of England? Why did we never attack innocent people on the street because they had an Irish accent? If two Irish passengers on a plane started speaking Gaelic why were they never thrown off?

We did none of these things and neither did the USA. The truth of the matter is that political parties in the US openly supported the IRA, sending millions of dollars to fund and further the cause.

So how were we able to understand the difference between an everyday Irish person and a terrorist in the days of the IRA, but we can’t be so tolerant of Muslims who are just as disgusted as we are about the terror attacks in our cities in the modern day?

I don’t recall the sort of xenophobic jingoism about the Irish that we see every day about Muslims. And don’t try and tell me it’s about religion, because Ireland has seen its fair share of division due to religious beliefs and we did not see the hatred toward the Irish that we see toward our Muslims.

“Immigration!” is shouted time and time again. But read the history books – the Irish were forced to leave their country due to starvation and fled to mainland Britain as well as the US. They were welcomed, not shunned and treated as terrorists. We didn’t see the hatred toward Irish migrants that we see from UK Nationalists toward migrants in our country today.

I bet an Irish person never had to worry about not getting a Visa to enter the US. It appears that the far right logic suggesting if someone is a terrorist and Muslim, then all Muslims are terrorists only applies in that very specific case.

Below is a list of some of the worst attacks over a 35 year period and the number of dead and injured. Quite an eye opener, don’t you think?

May 1990 – Seven wounded by blast at Army Educational Service headquarters in London suburb of Eltham.

May 1990 – One soldier is killed and another wounded by car bomb in Wembley.

June 1990 – Soldier is shot dead at train station in Lichfield.

February 1991 – IRA comes close to killing Prime Minister John Major and key cabinet members in a mortar attack on Downing Street. One of three mortar bombs slammed into garden behind building, exploding within 50 feet (15 metres) of the target.

March 2001 – Car bomb explodes outside BBC’s London headquarters. Police say the Real IRA, a republican splinter group opposed to the IRA’s cease-fire, was behind the blast. One man was wounded.

May 2011 – A warning comes from Irish dissident republicans opposed to the peace process in Northern Ireland.

So will someone please tell me what went so wrong with us as a nation that we can treat innocent people like this? Why we used to understand that one or two individuals don’t represent a faith or a country but now we hold entire communities accountable for the acts of the few. When did we learn to hate like this?

3 thoughts on “When Did We Learn To Hate Like This?”