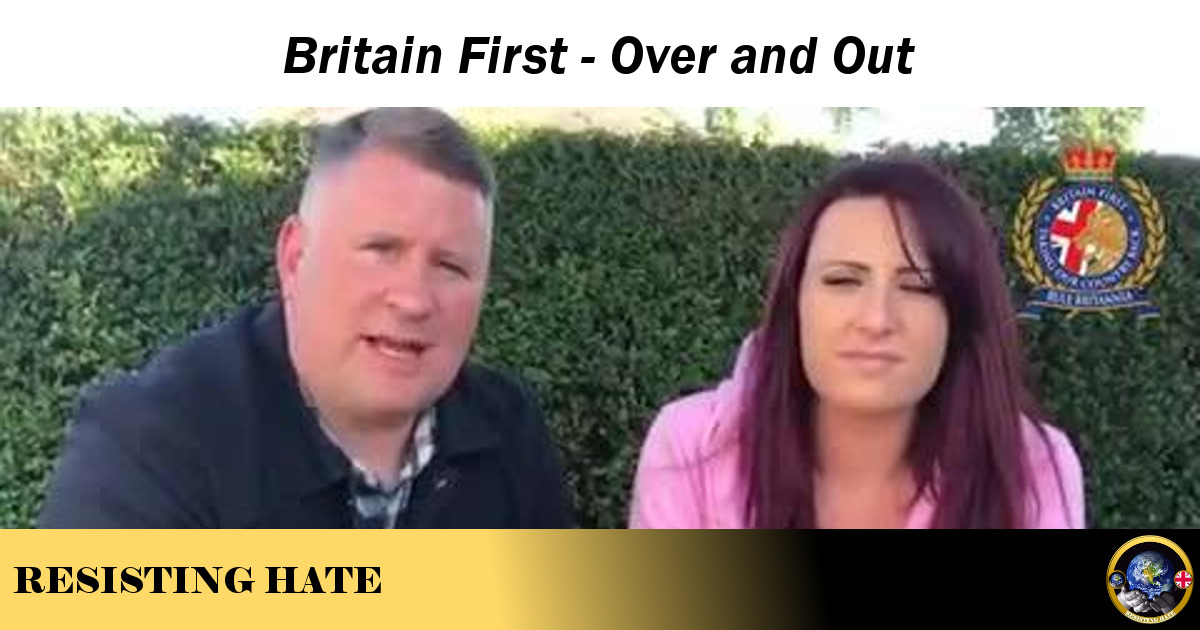 Ever since the US President Donald Trump retweeted fake news posted by deputy leader Jayda Fransen, Britain First have been receiving a lot of media interest. They have also experienced a backlash from UK political figures including Labour leader Jeremy Corbyn.

The media are giving them a lot of attention, but not for the wrong reasons. The attention they’re getting is all good – well good for us non haters – as it is all negative attention, which Britain First clearly don’t like. In response to their newly found notoriety BF are now claiming to be ‘persecuted patriots’.

For those of you that follow me on Twitter and read my tweets you will know that a Patriot, to me, is someone who has fought in their countries’ armed forces. I do not consider the definition of Patriot to be an individual going around with a giant wooden cross preaching Christian Extremism. This however is exactly what deputy BF leader Jayda Fransen seems to spend most of her time doing.

Leader of BF Paul Golding and Fransen are claiming persecution as they have both recently been arrested. Clashes with the police are not new and Fransen was actually arrested this time only moments after leaving court for her last brush with the law for hate speech.

One of the many times Jayda and Golding were arrested, they fled the country and went all around Europe using members donations obtained from their fund raising claims that they were going to counter sue. But really all the money was used to keep them on the run and give them a free holiday.

Since Donald Trump gave them exposure, the BF membership has risen in numbers. Which just spells trouble, especially when we have For Britain spreading similar Islamophobic hate also.

People only seem to know Paul Golding and Jayda Fransen as the key figures, but there are more hate spreaders in BF than these two gruesome Christian Extremists. As always, I wander the Internet to expose the truth and will be publishing more this year on the other members associated with this hate group.

But before I do that, things have been going downhill for Britain First. The Electoral Commission has deregistered the party for failing to confirm details and paying the annual fee of £25. £25! That’s peanuts to Britain First who are a party with access to funds estimating to around £250,000, maybe even higher. Although the cash did disappear very quickly. (Anyone fancy a holiday touring Europe?) I can only wonder, with the vast sums of cash they had – what on earth they did with the cash. Maybe Golding wanted to add a few inches, I don’t know…

Jim Dowson – Founded Britain First in 2011. He was the initial funder of the group until he left in 2014. There are mixed reports about why he left. Jim, 53 is a Scottish Far Right political activist. He’s been active across the UK, Europe and the United States. He supported Donald Trump during the 2016 Presidential Campaign.

Paul Golding – Was a member of National Front and also British National Party. He became the new leader of Britain First, after Dowson stepped down. It is rumoured that Paul launched a leadership challenge to force Dowson out of Britain First but at this moment in time those rumours are unconfirmed.

Golding is anti-Islamic and against immigration. He’s a Christian extremist, forcing his extreme Christian views on others. He uses our armed forces and our homeless to spread his message witch click bait tricks like “If you support our armed forces, please share.” This is nothing more than a ploy to get more publicity for his far right party.

Golding has a conviction for assault as well as several other convictions and assaults for hate speech.

Jayda Fransen – Deputy leader of Britain First and Golding’s most trusted ally. Jayda, is identifiable by her odd obsession with parading a giant white cross at anti-Islam rallies. She has harassed and intimidated the Muslim community for her own political gain. In 2014 Fransen was reported to the Police for inciting Britain First followers to bury dead pigs on the grounds of a proposed mosque to be built in Dudley.

Fransen has been arrested numerous occasions, but still continues to spread hate about Islam. She claims to be a Christian, but consistently does the very opposite of what the Bible teaches. This is why I refer to Britain First as a Christian Extremist party.

Jayda and Paul, both reside in the same street as each other. This shows how close they are. United in their hate against minorities.

During 2017, a serious allegation of Sexual Assault was made by a woman against Paul Golding. Jayda is said to have told the alleged victim, to keep quiet.

How they will respond to what is effectively being de-platformed, we don’t know. They have made an account on Far Right platform GAB but to date this only has 2895 followers which falls a long way short of the audience that their 1.9 million strong Facebook page currently enjoys.

They could come back with new accounts, but this remains to be seen. Fransen has made several attempts to start a new Twitter account but these have all been suspended within a few hours. Maybe Tommy Robinson will give them a platform – they have been pictured getting cosy with the well known hater on a few occasions and Tommy’s connections with Rebel Media would be very useful to a hate group that has lost a large chunk of its social media audience.

But Tommy is working with Anne Marie Waters on her #ForBritain party (Who have recently had their Facebook page suspended) so may not want to be publicly associated with Britain First who have become the laughing stock of the far right movement.

2017 has been a tough year fighting hate. But it has ended on a high. Our mass reporting of Britain First has helped bring down their Twitter accounts which is a very big victory for Resisting Hate and we have our supporters and followers to thank for it. We couldn’t have done this without you.

2018 will bring new challenges as we await Britain First’s next move. We have no idea what it could be, but we’re ready and waiting.

We will be working extra hard, to really bring down Britain First for good. We will also be working hard to tackle other accounts, so Britain First losing their accounts – let that be a message to the far right. We’re not censoring you, we’re cleaning up the hate you spread. We’re cleansing the poison you spew with the fake news that you publish on a daily basis.

And I Wanderer, will continue the work that I do. Because, no matter what threats you aim at me – I will never be cowered into defeat. You aim small, I aim higher. Whilst you might try and find out about me, I can guarantee you – you will not find anything. Cause they call me the Wanderer, yeah the Wanderer. I roam from town to town….

2 thoughts on “Britain First – Over and Out”