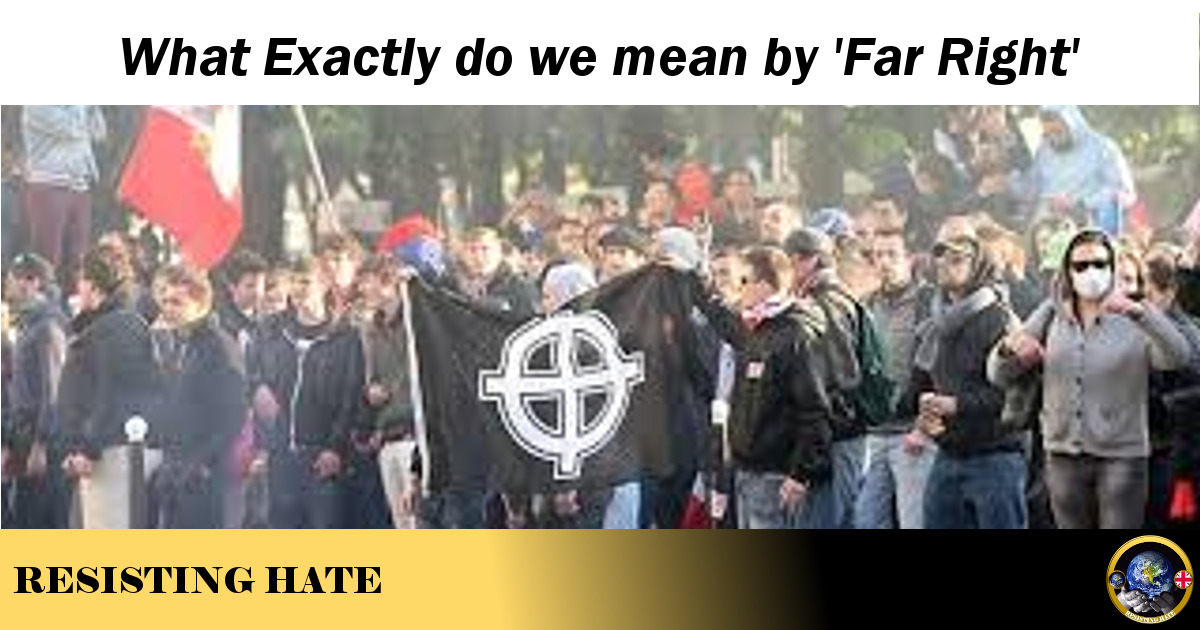 The political terminology of left, right, extreme left, far right can be a minefield for anybody trying to make sense of their newspaper. Not only are the terms hard to pin down to a precise definition they are also used interchangeably and (often) wrongly, leading to widespread confusion.

In order to understand what we mean when we use the term “far right” we need to be clear where it sits on the political spectrum and how it relates to other political perspectives.

Broadly speaking left wing views are concerned with the principles of Socialism. This is the belief that the state should work for the good of the people and which encompasses the ideas of democracy, free health care, the welfare state and some level of redistribution of wealth.

Further left than Socialism is Marxism. Marxism seeks to put control of the economy into public rather than private hands. The idea being that instead of workers working for a private owner they work for a collective benefit that they can all share in. Culturally this further left position is concerned with the social responsibilities of the state to the individual and also of the individual to the state.

The extreme left would be Communism which draws heavily on Marxist theory but which propounds the idea of a society with no class boundaries where all citizens are equal with equal rights and opportunities.

Equally broadly speaking the right wing are concerned with the principles of Conservatism which is a belief in upholding traditional established values and institutions such as the monarchy and the church. Conservatism is built on the idea of a defined national identity and embraces a monocultural rather than a multicultural society. Political Conservatism is linked to the idea of Capitalism, the idea that the economy is strongest when based on competing factions, with wealth in the hands of the few used to employ the many.

Further right than Conservatism is Libertarianism. This places more emphasis on the individual’s rights than any obligation the individual has to community values. Libertarianism is concerned with freedom and has become intrinsically linked to the concept of free speech. In Libertarian economics both private ownership and private enterprise are encouraged.

The extreme right wing would be Political Fascism. Fascism can be defined by the autocracy of a leader or government, a strong nationalist agenda and a pro uniformity approach. Diversity is not encouraged within a Fascist ideology. The emphasis is on conforming to the unified goals of the state.

The far right of which Resisting Hate and other anti hate groups speak share certain key characteristics. The first is Nationalism. It is important to distinguish Nationalism from Patriotism. Patriotism being love of one’s country whereas Nationalism is the belief that one country and its people are superior to others. Patriotism can be found in both left and right wing politics. Nationalism is a right wing ideology.

The right have a strong sense of national and cultural identity which can be a positive thing but the far right take this further and perceive integration with other cultures as a threat to their sense of identity. In doing so they reject the concept of diversity and start to see those of different races or cultures as potential usurpers of their country and diluters of their cultural values. This can lead to unrest within communities and prejudice toward those not deemed to share the same racial or cultural background.

The far right appeal to a sense of elitism. This is closely linked to the idea of racial and cultural preservation but with emphasis on the fact that a ‘superior’ community is being eradicated. This can be seen in far right white supremacist groups who call for more breeding among white people to ensure their race survives the ‘threat’ of blood mixing with other ethnic groups . It is not hard to see how closely this elitism is linked to racism. It is equally not difficult to see how this idea of racial purity invites a parallel with the Nazi Germany obsession with the Aryan race.

The growth of the far right can be attributed to the focus on a sense of community. Using similar recruitment rhetoric to a street gang, far right leaders offer individuals a sense of belonging and pride. This can be a powerful tool, particularly among deprived areas with low employment which is often the demographic where far right activism is the most prevalent.

In keeping with the idea of a traditional and, to a certain extent, homogenous society the far right reject the liberal ideals of actualising the self and condemn individuals who do not conform to their preconceived ideas of how people should behave. This is where we encounter gender and sexuality prejudice which is often deemed by the far right as unnatural human behaviour. It is also where we encounter religious prejudice with the far right self identifying as defenders of the Christian faith and using the pretext of upholding Christian values as a way to cause conflict with other religions.

The primary tactic used in advancing a far right agenda is the sense of urgency in defending a nation or community against an external threat. We have seen this throughout history with the persecution of people of colour, homosexuals, Jews, Muslims and other minority groups. This was very clearly illustrated during the Brexit referendum with Nigel Farage’s infamous Breaking Point poster which sought to depict immigrants as invaders in order to unite and mobilise the far right against a common ‘enemy.’

As a defender of liberal values I am often challenged why my view of live and let live does not extend to the far right. I am asked why I can support those who differ to me in matters of faith, race and culture but not those who oppose my political views. The answer lies in the essence of what it is to be far right. It is to oppress, devalue and discriminate against others. This is the ethos I oppose. The paradox being that the one thing I will not tolerate is intolerance.

6 thoughts on “What Exactly Do We Mean By “Far Right””