The Westboro Baptist Church are a deeply homophobic organisation based in Kansas, USA. Their primary slogan is ‘God Hates Fags’ (which is an offensive term for a homosexual) and their modus operendi mainly involves picketing the funerals of high profile individuals with placards proclaiming their extremist views. They make no distinction between funerals of LGBT people or non LGBT people – all funerals get the same ‘God Hates Fags’ placards.

The founder of the church Fred Phelps died in 2014 but was succeded by his daughter Margie Phelps who has led the organisation into more picketing (They have picketed at over 61,000 events to date) and who runs the Westboro website where the lunacy of these extremists is documented for all to see.

This church pretty much hates everybody. Normally at Resisting Hate we encounter individuals and groups who hate a selection of communities but this lot seem to hate everybody they encounter. We have added this group to our priority reporting list and would ask all our friends, followers and members reading this to report as many of these vile hate tweets as possible.

(Founder @MargiePhelps has already been suspended.)

Celebrating the death of children at Sandy Hook School shooting

They also encourage the abuse on young children by forcing them to pose with extremist hate signs. 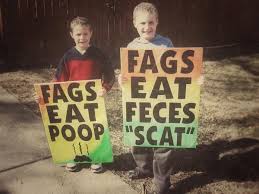