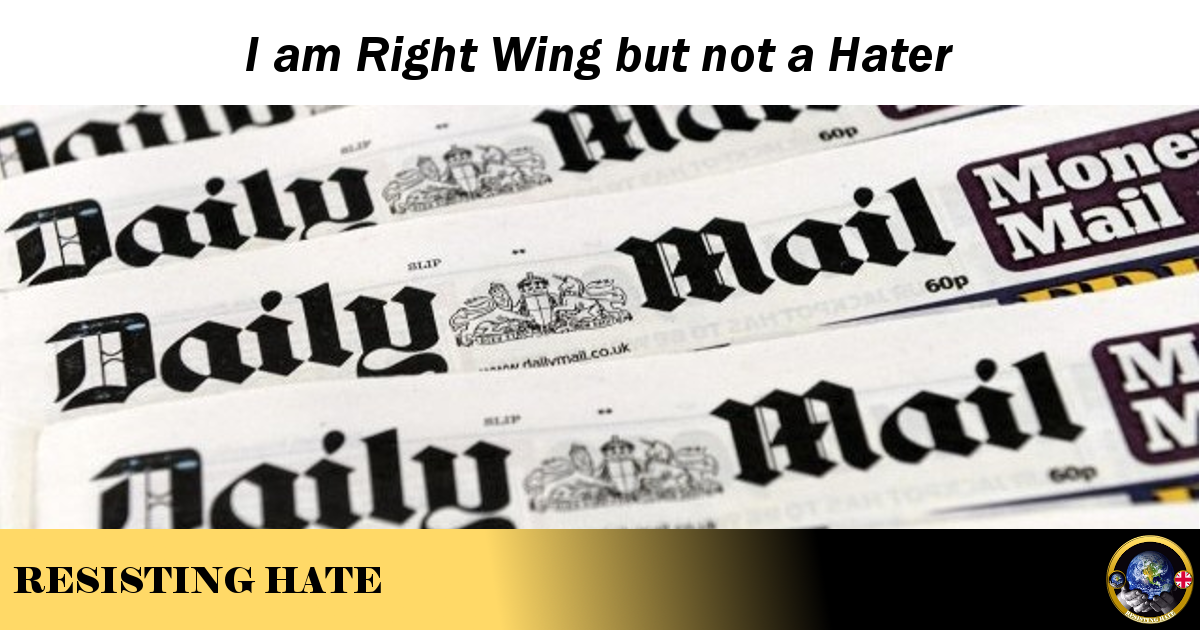 At Resisting Hate we get a lot of criticism that we only focus on hate from the right wing and we have a strong left wing bias. This is probably true but it is important to look at balanced views as at best we can learn from other people and at least we can start to understand why it is they think as they do.

So here is a guest piece written by one of our critics, edited only for style. We asked him to explain his right wing perspective on some key issues where we see hate speech online the most.

This is the first piece we have ever published that needs a clear disclaimer that many of the views in this article do not represent those of Resisting Hate or our members.

I’m Right Wing but not a Hater

I have a Twitter account and have clashed with Resisting Hate, Far Right Watch and Hope not Hate on a lot of different occasions and on a lot of different issues. This is mainly because I’ve said they only focus on right wing hate and they think everyone who doesn’t read The Guardian is a hater and a racist.

I was a bit surprised to be invited to write this as I know my views are massively different to the things this site usually publishes. But when the site said they wanted to give some exposure to different views on controversial topics and as they promised to only edit what I sent them for grammar and style and not content then I said I’d do it. I’m staying anonymous though. I don’t need the whole left/right wing drama in my life.

Ok so I suppose it would be fair to call me right wing. Not far right or racist or fascist but plain old right wing. I’m a Tory voter (except once for UKIP) and I believe that as I work hard for my money so should everybody else. I don’t mind paying taxes to support public services but I do mind paying taxes so people can sponge off the state. I’m not saying everyone who does is it an immigrant, I know plenty of English born people who swing the lead. But I’m going to vote for a government who makes it tougher for people who can’t be bothered to do a fair day’s work.

I do have a problem with immigration – yes. I thought Farage took his Breaking point thing a bit far but I don’t think it is unreasonable to want to reduce migration when jobs are on the decrease and public services like health and education are so stretched. Even then I’d be ok with genuine asylum seekers but I do resent economic migrants coming into the UK to use our facilities. The left make fun of ‘they take our jobs’ but unemployment is no joke and it makes sense to stabilise employment in the country before increasing the flow of people looking for jobs.

Yes I was a leave voter on the Brexit referendum. It frustrates me that people assume I’m a racist bigot just because of my vote. I didn’t vote Brexit so people could go round grabbing headscarves off Muslims. I voted Brexit because I believe in the sovereignty of the country and I wanted the British people to have more of a say in what happens in this country. I suppose border control was a consideration but not in the sense of keeping people out based on race, just in terms of better vetting who comes into the country for security and economic purposes.

I see the progressive ideal of multiculturalism as a bit naïve. I’d be up for it if every country in the world tried it but the way I see it, it is only Britain who makes any compromises. We talk a lot about letting people bring their own culture to our country but it is a double standard as other countries don’t allow Brits to do the same. Look at the lady arrested and imprisoned in Egypt just for owning painkillers. If that had been someone coming to Britain with a substance banned in this country then there is no way they would have ended up in prison.

The diversity/multiculty lark also annoys me because it makes out that Brits don’t have any culture. I’m not the kind of person who goes round yelling rights for whites but I do think we have a strong history and culture in this country that should be respected. I think we are expected to make a lot (too many) compromises so as not to offend other people. But what about not offending me? Is it ok to call me a racist just because I voted leave and read the Daily Mail? Isn’t that just as divisive as ‘hating’ somebody for the colour of the skin?

I have no basic problem with Muslims as people. I do think there is stuff in the Koran that is violent and threatening and I think Islam needs to come out of the dark ages. I think things like the head veil don’t help with the left’s ideal of ‘integration’ and I don’t see why they can’t recognise that by fighting so hard for the rights of Muslims to be different they are actually helping to drive a wedge between communities.  If Muslims showed they put UK values above Islamic values then that would go a long way toward reducing civil tension. I also think our police force are so scared to be called racist that they have let grooming gangs escalate to dangerous levels. There should be one law in this country and it should apply to all people equally. But thinking like this doesn’t mean I hate Muslims or I want to see them harmed. I might not want my kids going to mosques on school trips but I’m not going to teach my kids Muslims are all bad people and I’m not going to teach them to discriminate against others.

I don’t think it is fair to call me a hater just because I want a safer country with better economic conditions for my kids to grow up in.

9 thoughts on “I’m Right Wing but not a Hater”