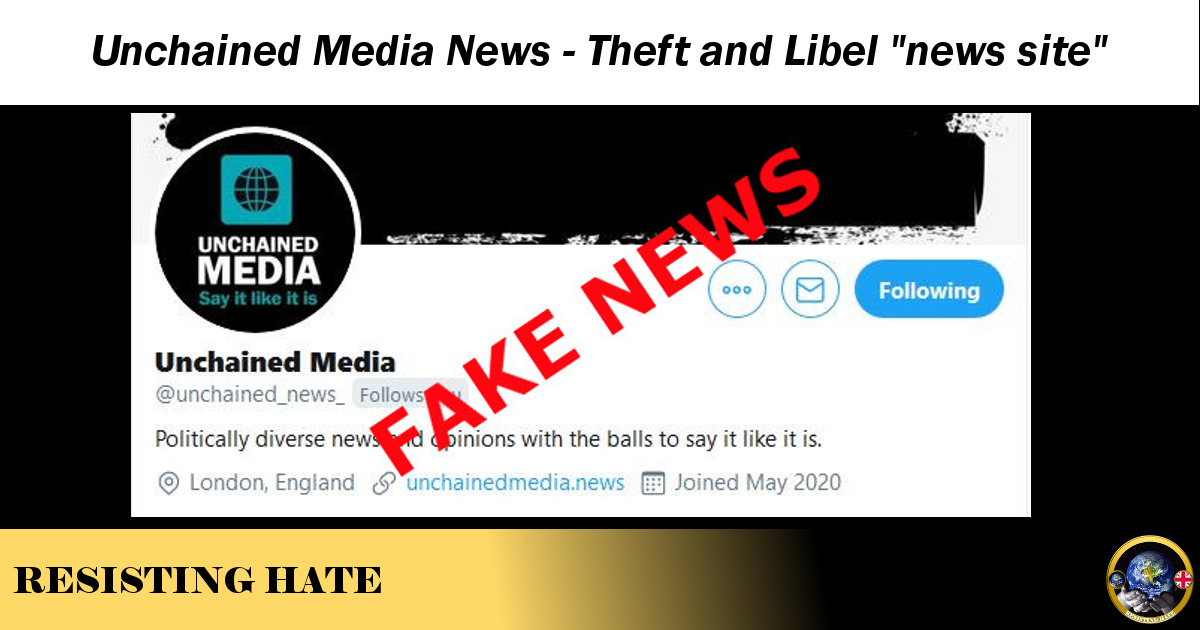 Unchained Media News (not to be confused with Unchained Media Scotland which is a genuine and respected news outlet) popped up on Twitter with the claim that it was a new media site where both left and right wing politics would be equally represented with the aim of creating political debate.

They made a Twitter account, followed hundreds of people in the hope of getting follow backs to boost their credibility and set about posting articles on political hot topics.

However it soon became apparent that Unchained Media were not producing their own content. They were copying articles from news sources like the BBC and churning them out as fast as they could. This perhaps explains why Unchained Media has such a low Google ranking. Evidently nobody has told them that Google penalises sites where the content is largely regurgitated.

In fact, the only original content posted on Unchained Media appeared to be articles about Resisting Hate and RH friends and associates. This set alarm bells ringing. Unchained Media insisted these articles were news >

But although we have a growing base and a notoriety for tackling the far right, Resisting Hate are not a big newsworthy concern. Yet Unchained Media were far more interested in ‘exposing’ us than they were high profile Antifa sympathisers, UAF, Stand up to Racism or Hope not Hate, all of which would have garnered them more publicity than writing about us.

The site also refused to publish their own names or identities, insisting on anonymity of their editorial team. This is strange behaviour for a news outlet. Journalists want to get their work exposed as much as possible and demand credit for their efforts. Yet Unchained Media appeared to be working around the clock, copy and pasting with righteous fury with no attempt to make any kind of name for their contributers.

I wrote a rebuttal of the nonsense published about me (which actually got more views than their lies, so I bet that annoyed them)

On the back of this piece, they asked if I would like to write for their site, to present a left wing voice.

By now the alarm bells were ringing loud and clear. Why would a site that seemed exclusively dedicated to the harassment of Resisting Hate want a RH founder writing for them?

I gave them a copy/paste piece from RH (if they can’t be bothered to write original content for their site then I certainly wasn’t doing it for them) and agreed to be a contributer, knowing it would give me access to the site stats so my team could delve a bit deeper and see what was going on.

Turns out not a lot was going on. Despite all that heroic copy and pasting the site’s stats were pretty poor.

Average visitors under 100 a day.

Total likes 19. And a glance at the total comments showed over a third of them came from one person. (Ciaran Goggins who is described on one site as a “serial pervert, troll and stalker who has boasted of being accused of rape himself“)

It was also interesting to note that although Unchained Media tried to keep their Twitter profile clean and neutral it was a very different story when they were on notorious hate speech platform Parler and thought that only like minded bigots were watching them.

This is the true Islamophobic agenda of Unchained Media.

The ‘quality’ of the site was also suspicious. As people on Twitter were quick to point out, the articles were badly written with poor attention to grammar and a total lack of understanding as to what does/doesn’t constitute libel.

The site did not concern themselves with the fact they were posting libellous nonsense because they believed their true identities to be safely hidden. They even had the audacity to target respected lawyer Mohammed Akunjee who is well known in legal circles for his deep understanding of libel law.

So we were looking for a small group of individuals who had a grudge against Resisting Hate, a poor command of the English language, an obvious Islamophobic agenda, a lack of understanding of how SEO works and enough misplaced arrogance to believe there would be no repercussions for using anonymous profiles to publish hate and lies.

At this point I turned to an expert. And it didn’t take long for Monkey (Begs Ali) to find the real identity of the site owner and editor.

This is how she did it:

So ‘Chief Flunky’ is none other than the hapless Neil Froggatt who has been harassing Resisting Hate members for years.

Neil Froggatt is best known for acquiring a criminal record after posting a series of racist stickers around his home town. These stickers depicted various high profile Asian individuals (including the London Mayor) on cards labelled ‘Pakemon’ cards. At the time Froggatt was receiving Universal Credit and was given a two year suspended sentence and community service for his racist activity.

Interestingly Neil, or ‘Froggy’ as he is known on Twitter was keen to point the finger at Tommy Robinson for the Unchained Media site. I’m sure Mr Robinson will be charmed to know that ‘Froggy’ tried to add yet another legal issue to the outstanding libel cases ‘Tommy’ is already facing.

As the primary editor of Unchained Media, one wonders if Neil Froggatt will be as proud to be the editor of the libellous site now that his real name has been linked to it.

The site’s second editor who writes under the name of Rachel McPartlin is Neil’s friend and associate Kate White (aka Kate Thelwell, Kate Thelwell White). Kate and Neil have worked together closely on harassing Resisting Hate in the past.

And her alias ‘Moneypenny’ on Telegram has been promoting Unchained Media’s articles about RH with gusto. We know Kate White is ‘Moneypenny’ as we have a selection of voice clips from the account like this one here where she is threatening to ‘fuck people up’.

Kate White has been harassing Resisting Hate for years and is still involved in posting the personal addresses of our members and people linked to us on her Telegram channel.

The third contributer to Unchained Media is a lady called Evangeline Snow. Snow, to be fair, was prepared to put her own name and picture to her article.

Under previous aliases of ‘TellTranny” and “Trumps Tranny” Evangeline liked to post extremist racist and Islamophobic content on the internet.

Evangeline, like Neil, also appears to have the occasional run in with the law

So there we have it. “Unchained Media” isn’t a news outfit. It’s a copy/paste/steal and plagiarise smokescreen created with the intention to defame and harass high profile individuals linked with fighting Islamophobia.

I can’t see this site lasting very long. At least one of the subjects of their ‘articles’ intends to sue them and I suspect that every time they try and publish anything now they will find a lot of links to Neil Froggatt’s criminal history in the comments.

Take a lesson from Resisting Hate, Unchained Media. If you have something to say in future, put your name to it. If the things you want to publish are so hateful and untrue that you are too ashamed to put your name to them, perhaps you shouldn’t be posting that kind of thing at all.

Six hours after we published our article ‘Unchained Media’ were suspended from WordPress for abuse and hate speech.

And they announced they would be publishing future pieces on their Telegram channel. Where they have only 12 followers!

Says it all really, doesn’t it.