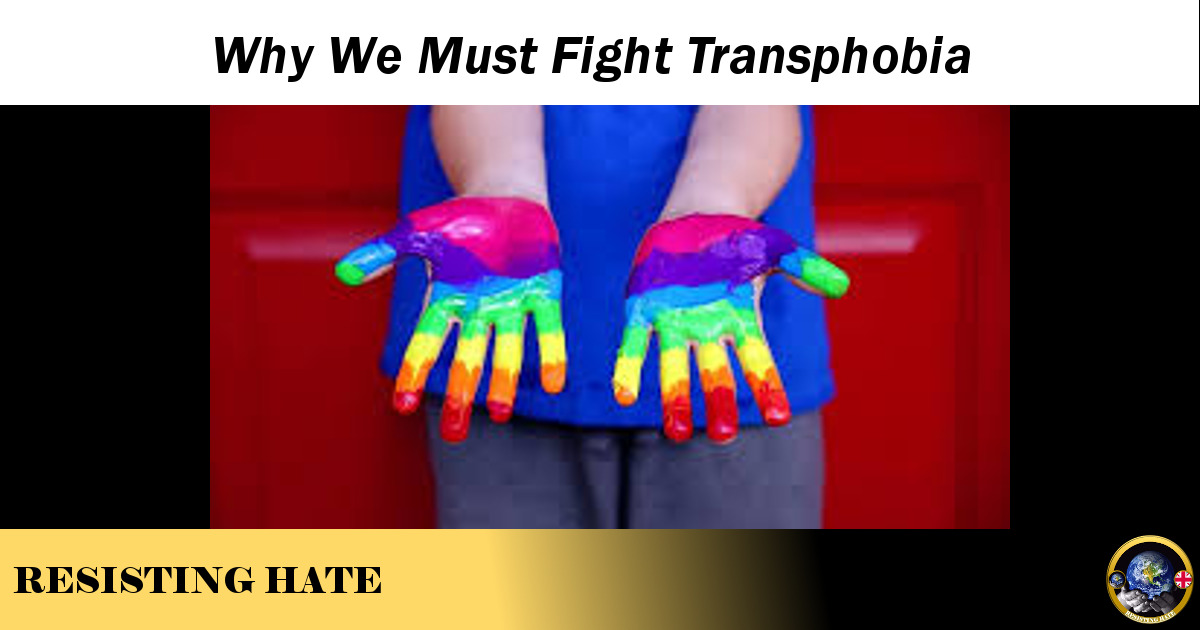 Probably the fastest growing area of hatred online is Transphobia. This prejudice is directed to both the hatred of both people who correct their gender (and who live as a different gender to the one they were born with) and people who choose to dress as the opposite gender.

Transphobia hit the headlines recently after a series of tweets by JK Rowling. Rowling, supported by a number of other feminists publicly takes the view that birth gender cannot be altered.

The high profile twitterstorm ignited a debate about the difference between gender and sex and how these terms relate to the transgender community.

However in general discussion the word ‘gender’ is used interchangably to mean both gender in the social sense and sex in the biological sense.

The LGBT Foundation speak of gender as a spectrum.

If we imagine gender is a spectrum with male and female at either end, some people feel like they fit a different category than the gender they were given at birth and move from one side to the other and some people feel they are a mix and somewhere on the scale.

Some people don’t feel like they fit on the spectrum at all and reject those terms all together. Some people refer to their gender as “non-binary” to describe when their gender falls outside the gender binary system. These people can sometimes use gender-neutral pronouns such as “they” instead of “him” or “her”.

The polarised view of two opposite genders of male and female is being increasingly discarded in favour of the more inclusive concept of gender identity which embraces the idea that there are many genders and that a given individual has the right to determine their own gender without being pigeon holed by the obsolete idea that gender is exclusively linked to genitals.

I support this idea of individual gender identity. I support it because I believe that the only person who has the authority to speak with certainty about their own gender is that person themselves. I believe that a society which tells a woman they are a man or a man they are a woman based solely on what they happen to keep in their jeans is an anachronism.

I also believe we need to broaden our understanding of gender as a direct reaction to the high suicide rate among the trans community.

It is just not acceptable to see a community experience this level of suffering without making an effort to change our views and definitions. Old fashioned views of gender are clearly not working and in my view we have a moral obligation to explore new and more progressive ideas about gender so we can be fully inclusive with the trans community.

When high profile figures like JK Rowling express transphobic viewpoints (even if they do not mean to be prejudiced) it gives a voice and a credibiity to the people who do mean to be transphobic. People like Posie Parker (banned from Twitter and demonitised on You Tube for hate views) but who spends a good deal of time and effort denigrating the trans community.

This abuse often takes the form of ‘dead naming’ where a person is referred to by the name they used prior to adopting a name for their subsequent gender or ‘misgendering’ where inappropriate pronouns are used with the intention of causing distress (referring to a he as a she for example).

Often social media is a life line for those transitioning, so intentionally disrupting that safe space is not a joke, it is abuse that can cost human lives.

A lot of the hatred toward the trans community stems from ignorance. And the source of all that ignorance lies in the confusion about changing sex/gender. It is crucial to realise that the process of transitioning in most cases is not a whimsical desire to ‘change sex’ but a need to correct the physical body to match the genuine and true gender that the individual knows themselves to be.

Most of us are lucky enough to live in a body that we feel belongs to us. But this isn’t the case for everyone. We need to reach out and support people who have to make the difficult decision between living with a gender they know themselves not to be or undergoing the ordeal of transitioning and all the stigma that our supposedly enlightened society attaches to it.

We need to celebrate and support those with the confidence to be true to themselves and live their lives in a way they know is natural for them.

We need to accept that dated ideas about gender are not serving our society well and that holding on to the dogmatic idea of only two genders in the face of modern science which supports the idea that gender is anything but binary is putting the health and mental health of transgender people at risk.

We need to fight transphobia. Because the more we let this hate fester, the more abuse will flourish and lives will be lost because of ignorance and hatred.