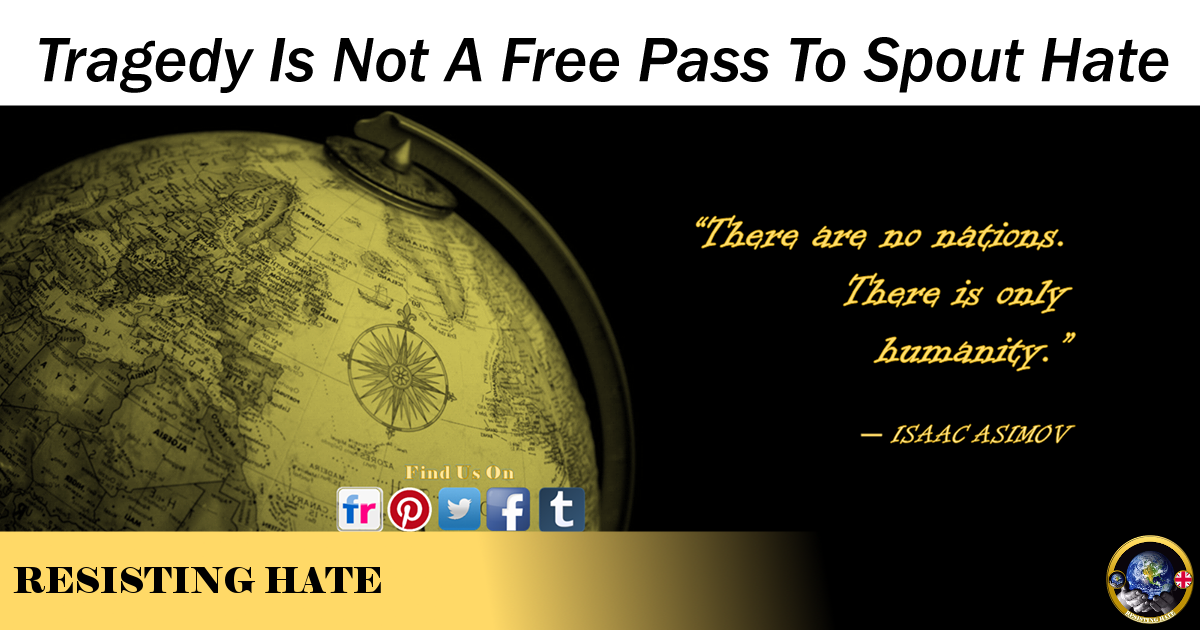 For those who seem to have forgotten this critical point within the first few hours of the news breaking of the atrocity in Manchester late Monday night I will offer a reminder to jog your memory.

Yet since the news broke social media has been flooded with far right individuals and action groups trying to capitalise on this tragedy to promote their personal hate agendas.

Most of the attempts to use innocent dead children for political purposes have been directed with hate toward the religion of Islam. The prurient speculation as to the religious faith of the murderer began in the early hours and continued until the name of the attacker was released by the police late on Tuesday afternoon. The discussions on social media, Twitter in particular, concentrated more on whether or not the attacker was a Muslim than on any other aspect of the atrocity. To some small minded individuals this tragedy was nothing but a sick opportunity to use the actions of one evil man to condemn the billions of individuals who practise the faith of Islam.

There are serious consequences of this kind of hate speech. The relentless, bigoted demonising of innocent people in the mistaken and foolish belief that it will somehow bring about any positive results for our society only serves to further the spread of ignorance toward different cultures and faiths. It isn’t ISIS or genuine terrorists who are attacked in the name of hate rhetoric inspired vigilantism, it is the bloke walking home from the mosque or a lady doing her shopping. It is the people who abhor violence as much as you or I do who will suffer if incitement to hatred goes unchecked.

The worst perpetrators of this hate speech are the usual self promoters who spew their hate onto any available platform that will have them (Daily Mail, LBC, The Sun). Tommy Robinson out in full force as always claiming all Muslims are to blame. Katie Hopkins, even more vile and vicious than she normally is, mulling over a “final solution” to the problem of terrorism.

When Resisting Hate pull these haters up on the messages they use to try and indoctrinate their legions of social media followers into cynical and hate filled world views we are told repeatedly that ‘words don’t matter.’ That people have a right to react to tragedy by inciting hate against those who have nothing to do with the events that have taken place and who may have lost loved ones in the Manchester attack themselves.

Many on social media today have wilfully misunderstood those of us involved in anti hate work and have accused us of caring more about the tweets on social media than the attack itself. But this is not the case. It is out of respect for the victims of this tragedy that we ask people not to insult the memories of these children by using them to promote further violence against others. You trivialise the lives of the dead when you make them pawns in a campaign to oppose other faiths. Our children’s lives are worth more than this. They deserve dignity not exploitation.

What you need to understand far right haters is that nothing constructive can come out of the solutions you propose. What do you think calls to “rise up against the Muslims” will achieve? I’ll tell you what pitting the people of the country against one another will achieve, it will result in battles between fascists and antifascists on the streets, bloodshed, more innocent people harmed, more children victimised in the playground, more barriers between communities. It will bring us chaos, not peace. It will perpetuate the very problem you are seeking to solve.

The far right mock the idea of uniting in the face of atrocity but in truth this is the only defence against terrorism. Terrorism is not interested in the lives it takes. Terrorism is focused on the effect senseless murder has on society. When we divide, the terrorists win, when we use the deaths of our children to score cheap political points, the terrorists win. When we become a nation mindlessly baying for blood with journalists openly calling for genocide we become exactly what the terrorists want us to become. We are better than this. We can find ways to keep our country safe without turning against one another.