Right. All of you know what happened yesterday, no one could have logged into Facebook, Twitter, looked on TV, seen papers, internet news etc…without seeing it.

As you would expect, the medical, police and fire service were praised (as they should be), there was a gathering of COBRA, statements from the PM, Queen, Heads of State from over the world and a general outpouring of sadness over what has happened as it was truly tragic and an evil act.

But what I am also seeing is the outpouring of idiocy, ignorance, stupidity, mind numbing moronicness being expressed on social media.

It all started within minutes of the event. I was plodding along happily on my Halal Kitty account on Twitter, answering ignorant idiots like I normally do. Suddenly the first report is made. Not from a news agency but on Twitter, as is the speed of the modern age. Within 3 minutes of me seeing one of the first posts about an “explosion”, a troll who had been trying to engage me for 36 hours or so started off with “Looks like it’s your religion of peace again“.

Ok, water off a ducks back. Feel free to think what you like, your ignorance with that kind of comment is clear for all people with more than 2 brain cells to see. But they were then joined by a second person, then a third, I went off to make a cup of tea and by the time I got back I had been tweeted by almost 40 ignorant idiots. It got so bad that I had to turn off the notifications on both my phone and iPad as the idiots debated between themselves about whether or not “Liberals will agree this time that we have blood on our hands“. (You may well say block the idiots, but believe me, as soon as you block one, another takes its place, or they jump on a second account and engage from there)

And then we come to Facebook. As you would expect, within my own account there was no rubbish however I jumped onto the Mock The Right and Resisting Hate pages to discover that trolls had decided to make some quite disgusting comments. After fighting against a tide of ignorance and bigotry for a good hour or so I had enough and decided that rather than give my customary warnings about hate speech, doxxing and comments made purely for the purpose of giving offence, I would just ban idiots from the page with no warning.

It still surprises me that people with the attitudes that I have seen in the last 24 hours can function in society. Muslims have been part of our country for quite a while. Looking into the history during a ‘polite altercation’ with a bigot last week, I saw that Muslims have been here before Elizabethan times, so pre 16th century. In fact it was in Elizabethan England that Muslims are first recorded as openly living and practicing their faith. These idiots who think that the Islamic faith has only been here for the last 20 years or so are totally wrong (although apparently the far right believe liberal scholars have changed history to fit in with our liberal belief system.)

Anyhow, I have spent the last 24 hours collating information for the police in relation to hate speech and reporting it so they can take action (I have given an overview of some of the comments above below but have deleted the identities of private individuals so that this post can’t be reported. Needless to say that these plus a lot more have been passed to the police

👮– some were so bad that even with masses of editing there was no way I could post it on a public website.

I do hope that one way or another the people involved see that there are those of us who not only report posts but who also openly say that these things are unacceptable. I really hope that some of these haters feel ashamed about what they have said today in the wake of this tragedy (although I don’t really think they will).

If I was filled with this kind of venom I would hate to have my family, employer, neighbour, passer by know that I held these views. I would want the earth to swallow me up.

I hope that they slither back into the vile hole that they came from. 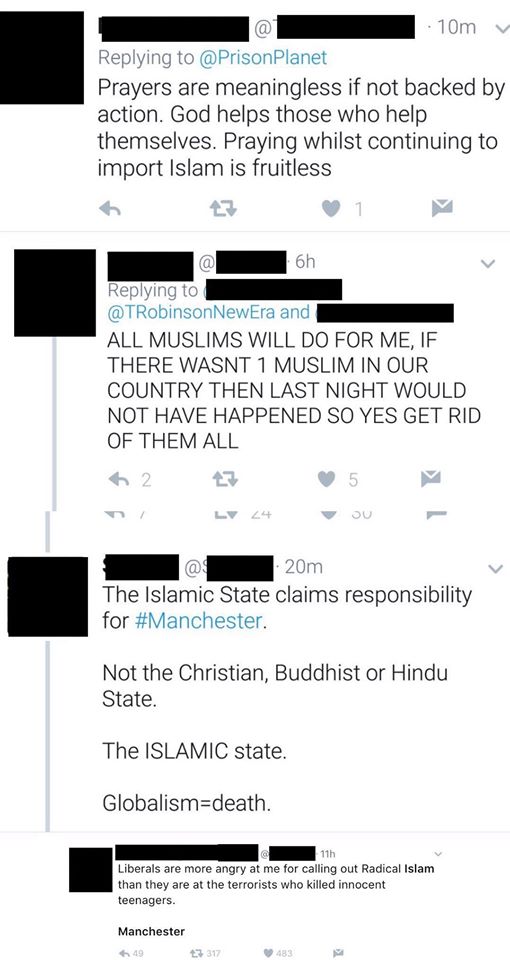