Several of our readers are aware of Toni Bugle and a couple of people have asked us to to do a piece on her activity for ‘MARIAS’.

Toni runs a group called MARIAS…..or “Mothers Against Radical Islam And Sharia”. While the first part of the title sounds laudable (after all, who wouldn’t be against extremism) they are in reality a budget version of Britain First. Their view of Sharia is much the same as Tommy Robinson and Britain First’s…..which essentially means Bugle has no clue what Sharia Law actually is. She seems to have gained her knowledge from soundbites via YouTube and far right memes.

A simple glance at the MARIAS website shows a plethora of “Britain First” style sensationalist headlines which bash Muslims. When you look further into them, very much like Britain First, they are either mislabelled or have absolutely no basis in truth. As you would expect, Bugle and MARIAS totally overlook any non-Muslim paedophile, murderer or criminal. They are only interested in Muslim criminals.

Bugle was a member of the EDL, dating back to the London demo in 2013. It seems that it was then that she started with her fawning admiration for Tommy Robinson. Despite knowing that these marches descend into violence on a regular basis, she convinced her 68 year old mother who suffers from severe arthritis that it would be a good idea for her to go along too. She also took her 18 year old daughter along to what our group would consider to be far right extremist demonstrations.

Bugle later joined the English Democrats in 2016 along with Anne Marie Waters (of ‘For Britain’ infamy) which is a clear indication of the the far right Islamophobic company that she keeps. She also ran for the Role of PCC (Police and Crime Commissioner) for Bedfordshire.

Bugle is quoted as stating that not all parts of society are treated equally and that she believes the police are forced to investigate politically correct “non-crimes.” She also states:  “I am particularly concerned about the rise of extremism and the threat of terrorism. Tough action must be taken against the perpetrators. I am passionate about ending the activities of child grooming gangs. There must be zero tolerance with vulnerable youngsters encouraged to come forward in safety. Great soundbite but the subtext is basically that she is only interested in protecting vulnerable youngsters when she can wave it as a virtue to demonise Muslims. Thankfully, and unsurprisingly) Bugle failed to get the role of PCC didn’t get the role (it went to Kathryn Ann Holloway), proving that her distasteful views are not shared by the peaceful majority.

Bugle likes to do little web chats, which are essentially budget versions of the ones carried out by Paul Golding. She sits in front of her webcam and whinges about the latest injustice, crying that Muslims will replace “British people” and moaning that the police are forced to investigate far right criminals and hate speech because they want to appease Muslims.  You only have to listen to a few of these broadcasts to realise that there is little substance to her claims and that she is at heart a bigoted and ignorant Islamophobe. (Truth is a defence to libel – her videos prove beyond any doubt the veracity of this claim).

It is also alleged that (in common with many other right wing individuals and groups) Bugle scams money from her followers. We were particularly interested in how she obtained the funds for her holiday to the USA.

There is little thought process involved when Bugle posts rubbish on her Facebook timeline. The post below shows her commenting on a post from our sister page Mock The Right. She makes a random reference to polygamy, a further attempt to drag Islam (where polygamy is legitimate) into a discussion that had nothing to do with Islam.  As with her bigoted MARIAS gang, if something can be twisted to make all Muslims look bad Bugle will post it with no thought for the consequences.

It is my view that Bugle is full of hate and determined to do whatever she can to cause issues for the Muslim community. Luckily there are only a few members of her group, and she mainly appeals to Nazis, the BNP and haters who follow Waters in ‘For Britain’.

Most of the extremist far right are happy to follow and befriend any person who they think is as ignorant as they are. This has meant that I’ve been able to make friends not only with Bugle but with many others in her circle using 3 well established fake Facebook profiles. They are probably wondering why so many of their bigoted posts get removed from their private Facebook groups….. 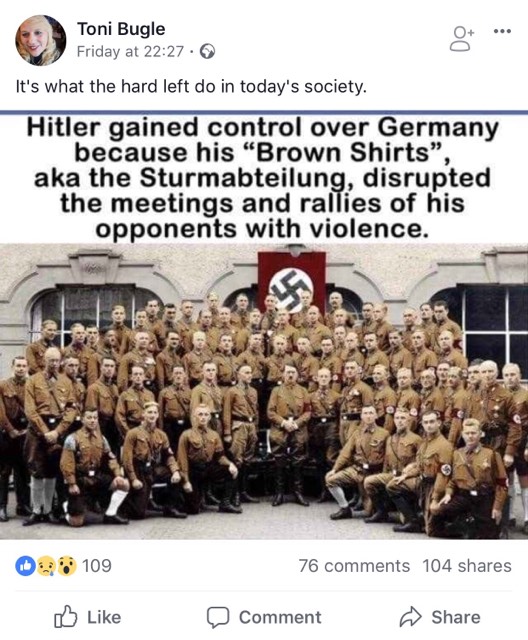 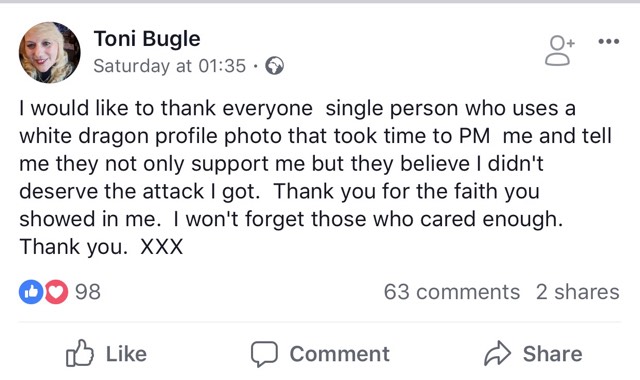 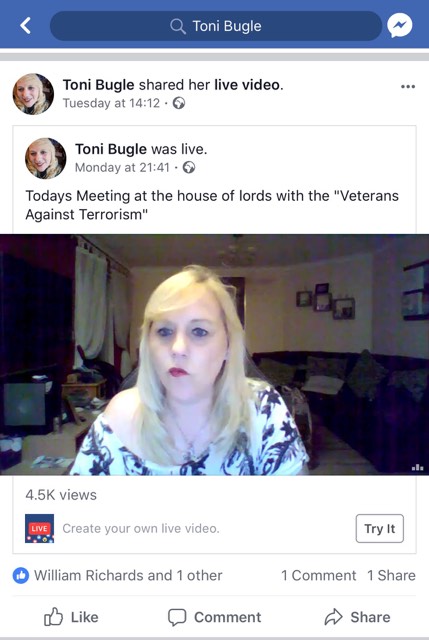 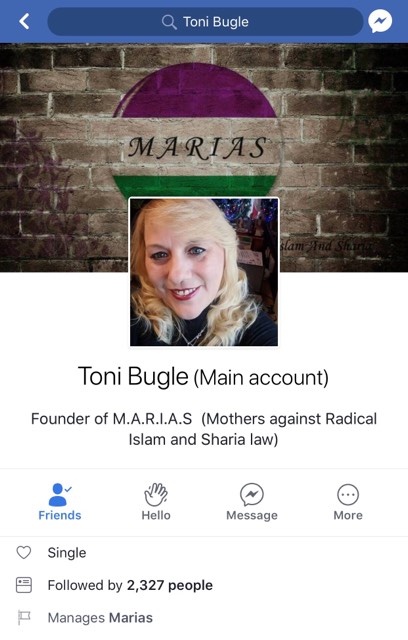 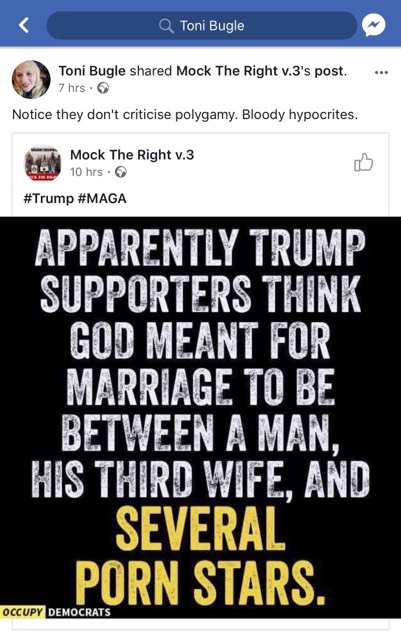