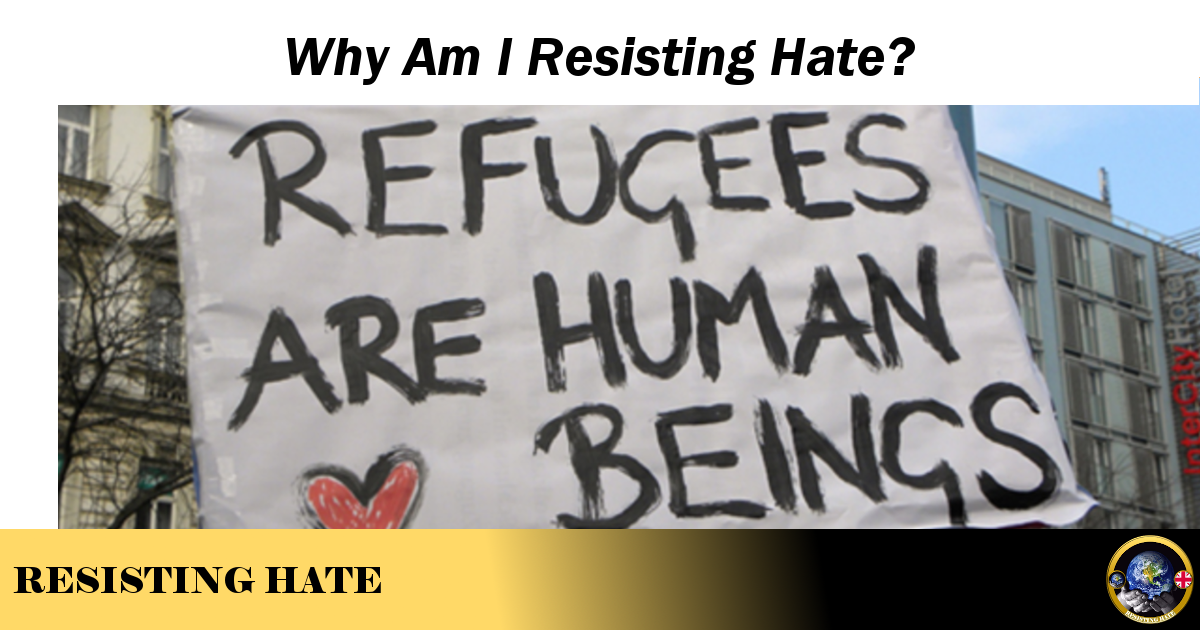 A very honest account from one of our members about their individual journey to Resisting Hate.

Firstly, a confession. I used to be a casual Islamaphobe. I’d have voted yes to ban the hijab. I used to ‘like’ and ‘share’ Biffer memes – because I was ignorant. Because of the people I was friends with, my timeline would always be full of anti-immigration, anti-Islam. I also found one of the Polish men I worked with incredibly rude, ignorant and a bit of a twat so I decided we had too many Polish over here.

I was never racist – I won’t trot out the line that I had black friends but I wasn’t a racist. I just believed what I read online and clicked and slowly my brain just absorbed the rhetoric. Halal meat! Outrageous! All Muslims must be ISIS lovers and radical. Trying to swarm us with jihadi.

My opinion was the same as that of many – once the refugees are in ‘safe’ territory why don’t they just stop? Why are they so desperate to get to ‘our country’? The benefits they supposedly got were incredible, no wonder they were coming in droves.

Then I saw that picture of a poor drowned toddler, washed up on the shore. At first I was overwhelmed by sadness, then anger. Why put this little boy on a boat to his death…?

This was a defining moment for me. The clouds in my brain parted and, as a parent, the thought of that being my baby washing ashore sickened me.

So first I looked at the refugee ‘camps’. Where before I got angry at those trying to break free and causing mayhem, I looked at the conditions they were expected to ‘make a life’ in, and wondered what I would do in those situations.

‘Why can’t they just go home?’   Of course I’d asked myself that, and then I saw pictures of their ‘home’.

They stopped being migrants and started being human beings to me. I’m ashamed that I was so swept up in the hatred of ‘swarms of migrants’.

I started questioning things I read online, and fact checking. And listening. Listening and asking respectful questions to appropriate people.

When I was introduced to RH, I found others who strongly want to work to help people see the truth. To ask questions, to listen and consider the information available before making informed decisions.

I’m not trying to hurt anyone – quite the opposite. I engage with people in the hope perhaps one day they will cotton on to the truth themselves. Not by listening to someone or something without question.

Question everything, it’s how we can all learn to be better people to our fellow human beings who find themselves victims of a war or genocide, or no prospect of earning money for their family. Ask yourself what you would do and where you would go.

Don’t believe me just cos I say something – go and fact find and then make your mind up on your stance. Only then. And choose your friends wisely, as mob mentality is a dangerous disease.

2 thoughts on “Why Am I Resisting Hate?”