There was an interesting incident at the March for a People’s vote on 23 June 2018 when far right convicted fraudster Stephen Yaxley-Lennon supporter Jonaya English accused a pro EU supporter of calling her a ‘house negro.”

This was further backed up by Toni Bugle of MARIAS who claimed the person in question had called Jonaya a ‘filthy negro’. Note the inconsistency in the story. Jonaya had claimed the term ‘house negro’ was used. 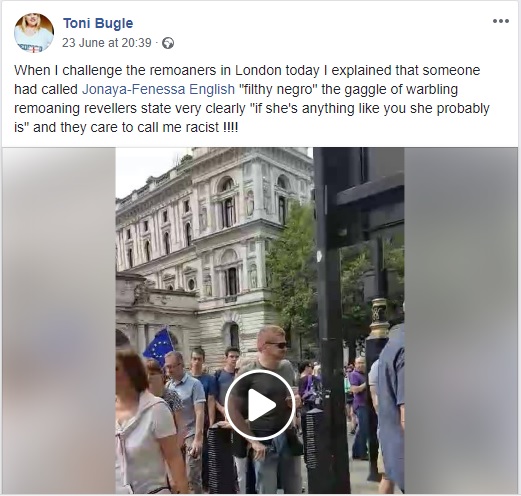 However there seems to be a lot of dispute over whether the alleged racist slur actually took place or not. Witnesses at the scene have denied the term ‘negro’ was ever used.

It didn't happen. It's a lie. I was right there, I know the person who was accused – it's a vicious, nasty set up job!

No she didn’t. Here’s the video. Clearly shows those behind camera looking to provoke violent response from remainers. And when you/they failed, they made something up https://t.co/3gwnG0FjIk

I know this woman personally very well. What you are trying to say about her is the most offensive thing I've read in a long time.
You need to retract this and admit you lied.

On 23 June Jonaya informed Twitter she had taken video footage of the alleged racial slur and would be posting asap. I am writing this on 27 June and Jonaya has posted no video footage at all relating to her accusation.

However Toni Bugle has posted some footage which thanks to Mock the Right has been downloaded and included below. I have watched this footage and it is my opinion that the accused lady does not at any time call Jonaya either a ‘house negro’ or a ‘filthy negro.’

We would urge Jonaya if she can back up her claim to do so asap as failure to do will almost certainly see her sued for libel by the injured party.

In the absense of any evidence to the contrary we can only assume this was a lie. It is a lie that has backfired spectacularly on the two silly women who dreamed it up.

Jonaya English – still no video so I think we can draw this story to an end pending legal action.

– some daft 20 odd yr old's 'journalism' career is now over. She might even get a police record. Her future career options are now seriously limited

Hello Jonaya,
Which one was it now? 'filthy n%gro' or 'Nazi & n%gro'. I actually forced myself to watch the whole 7 minutes of your silly little video. And guess what, it was neither. The n-bomb was never dropped. You need to work better on your lies. Ever heard of libel? https://t.co/gYVNpSHVs9

She has. Here's what I (in good faith) believe happened – Jonaya heard nuffink. Bugle made it up cos she's sick of being called racist, told Jonaya who believed it then developed the lie, Bugle now totally backtracking. They've used that lassie. So naive.

It’s been shared 7000 Times. If untrue, then that’s some serious defamation of character and Jonaya better have some savings. Absolutely seek legal advice, take her to the cleaners.