Alex Jones runs the fake news website Infowars and is the employer of notorious Islamophobe Paul Watson aka Prison Planet.

If you know the term ‘gammon’ Jones is pretty much the epimome of it. He basically is Gammon Man. 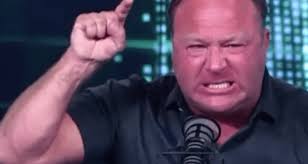 The site is not satire and the fake news is presented to appeal to a gullible public who swallow the nonsense Jones spouts.

Notable headlines and lies include:

Jones interviewed a man who claimed Nasa were running a child camp on Mars. This gained so much public interest that Nasa actually had to go on record and publicly deny it.

Infowars promoted the lie that a pizza restaurant in Washington was the centre of a Democrat sex ring – exposed when the emails of John Podesta (which Jones and co believed to be in code) were hacked and subsequently leaked by Wikileaks. It was a total fabrication. No child sex ring, no culprability involved with the pizza restaurant in question. Jones had to issue a public apology.

In 2012 twenty six innocent people were slaughtered in a school shooting at Sandy Hook school in Connecticut. Jones claimed there were no deaths and the children involved were in fact child actors. He is being sued by several of the families and the cases are ongoing.

In 2013 Jones claimed the US Government has access to ‘weather weapons,‘ and suggested that the Government may have played a part in the Oklahoma hurricane of that year.

Infowars suggested that the Charlottesville, Virginia footage of the Nazi march posted by a witness was in fact a deliberate attempt to smear Donald Trump and that the filming witness was a deep state government operative with an ‘axe to grind.’  Jones is being sued.

Known for his pro gun views Jones was quick to decree the Parkland, Florida school shooting as a staged event by the anti gun lobby, alleging the victims were in fact actors. He got a strike on his You Tube account for that. Even when he did finally acknowledge the shooting to be genuine he managed to name the wrong man as the aggressor and, yep, he is getting sued for that one as well.

In 2017 Jones falsely linked the Chobani yoghurt company to a case of child sexual assault. Once again he was sued and he apologised.

Jones is also in the process of being sued by two Infowars employees for “antisemitism, anti-black racism and sexual harassment of males and females.” He denies all allegations.

He falsely accused Lady Gaga of being a Satanist.

He claimed the moon landings were faked.

The interesting thing to notice is that in every single case Jones is quick to retract his original ludicrous comments. He has never, as far as my research has showed, had the courage of his convictions about any of his outlandish claims. Which rather begs the question why he makes the comments in the first place.

In a recent custody trial Jones’ lawyer argued that the personality of Alex Jones on Infowars was that as a performance actor, a character playing a role. If this is true then it has a huge impact on Infowars as it confirms the view held by Media Bias/Fact Check and Snopes that Jones and his site promote nothing but fake news.

It also reinforces the view of Resisting Hate that Infowars is nothing but a site for liars, morons and conspiracy theorists.