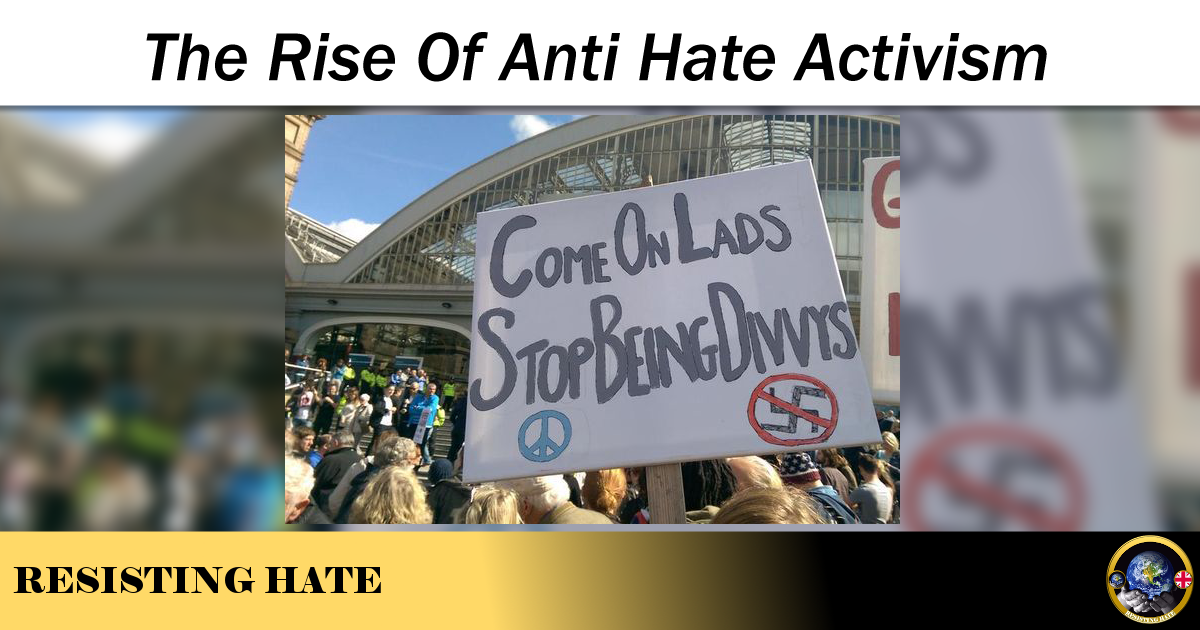 Newton told us that for every action there is an equal and opposite reaction and although the science behind that may elude the author of this article, the premise doesn’t. The third law of motion is surprisingly apropos to the wave of Anti Hate activism on social media.

Online hate was initially confined in the main to anonymous message boards like 4Chan and specialised hate forums like Stormfront which catered to an extremist minority of a shared ideology. As hate views became slowly popularised, partly through groups like Britain First and their 1.5 million Facebook followers and partly through a changing tide in world politics, the wave of hate spread from small isolated sites to enter the mainstream world of social media.

It was as a reaction to this increase in online hate that started anti hate groups and anti hate activists to mobilise against the growing voice of hate which most frequently took the form of racism, Islamophobia, Homophobia and Anti Semitism.

At a recent seminar I attended, the lecturer described the far right as “groupuscular” by which he meant they are a structure of small mainly unconnected groups who share a common ideology but with no umbrella organisation or hierarchy. The same can be said for anti hate activism which broadly falls into four separate categories which it may be beneficial to briefly define.

The challenges faced by the different types of anti hate activists vary substantially. For an individual activist it can be hard to get their views heard above the melee. They are also likely to be very dependent on one or two social media accounts, the loss of which can have a devastating effect on the impact they can make (and we all know how much Twitter enjoy suspending non far right accounts…)

Our group often work quite closely with the informal alliances category, most of whom prefer to be addressed by their pseudonyms. The challenge for these groups is credibility and reach. They have the ability to get information, often through non legal methods like hacking and social engineering but what they do not have is the infrastructure to get that information to a wider audience themselves or, due to their need for anonymity, the contacts in media to do it for them.

The fourth category, the formal group are expected to be totally open with regard to their daily workings. Their behaviour and the behaviour of those associated with them has to be exemplary. Their accounts are published and scrutinised by the media, their figureheads are well known enough for any scandals to hit the headlines and they often have to reframe their views to make them palatable and accessible to the mainstream media and Parliament.

The primary challenge they face is doing the day job in a completely transparent environment. The frustrations of this can be red tape, delays and targeted opposition from organisations with differing views. Although these groups do often receive both public and private funding it is rarely enough to meet the running costs and it is not unusual to see formal groups resorting to crowdfunding and donations from individuals to make ends meet.
Groups like ours in the third category probably face more challenges than any of the others. We do not have the funding available to the formal groups and although we share their aspirations of reaching a wide audience with self written articles, art work and infographics this can be harder without a regular source of income.

We do not have public figures who can guarantee that an article they write will be published in the press but we do have founders open enough with their identity and who are enough of a thorn in the side of the far right to receive regular threats of personal violence. Sadly, unlike the bigger formal groups, we do not have widespread access to police protection.

There is a real interconnectedness between the informal structured groups. In most industries groups with such a similar ideology and strategy would be seen as competitors but in the world of anti hate the exact opposite is true. We work together. We share each other’s posts and tweets and help to get one another’s messages out. Although this is still going back to that earlier definition of “groupuscular” as in there is no formal mechanism behind the working together, the linked social conscience gives every group a voice beyond that of its own reach. Again this can really benefit the informal alliances as their association with the informal structured groups can get their hard won information to the audience it deserves. And again it benefits the formal groups, some of whom may have a strong infrastructure in their own right but who by their very nature are not part of that unspoken union between the informal structured groups and benefit from reaching the wider audience that the interlinked groups can achieve.

I think the key message is that all these different forms of anti hate activism are relevant and valuable in the battle against hate. Each brings something different to the table, different tactics, different perceptions, different abilities. Each has evolved through necessity and the changed political and social landscape that has brought hate speech into the open. The unifying factor of a desire to see a hate free world is a strong indication that in the anti hate field of comradeship over competition we can allow ourselves to hope that these people willing to work together for a common good will achieve the ends they seek.