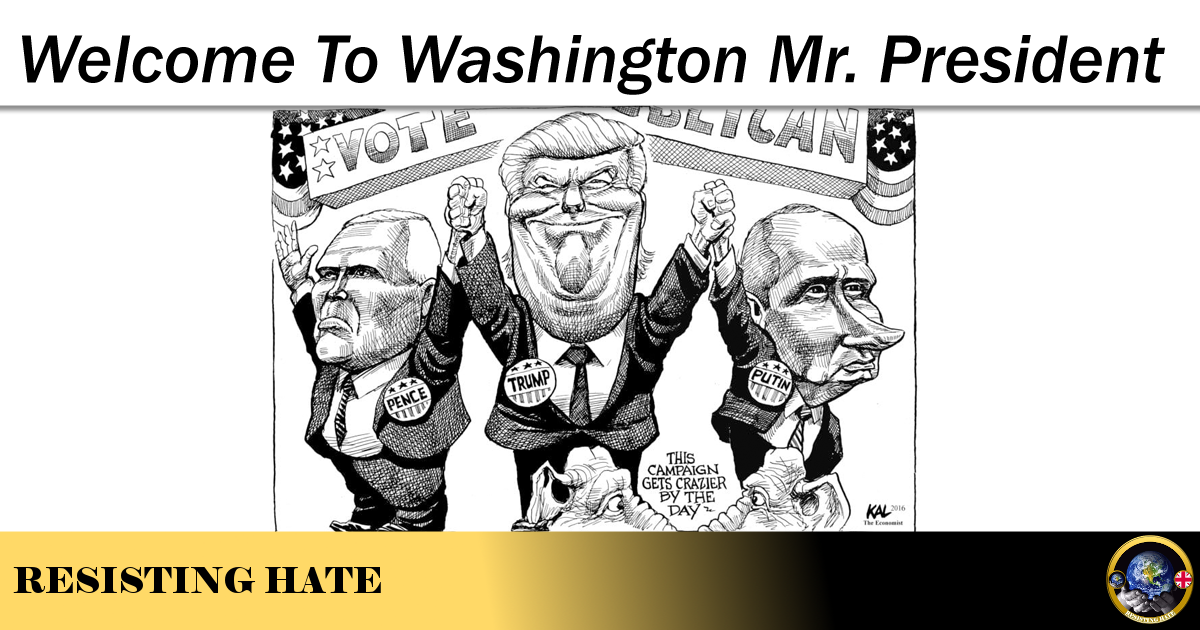 I write this on the eve of President Donald Trump’s inauguration. I still can’t say that with a straight face, the sheer fact that so many people were taken in by such an obvious fraud is staggering.

However, we have to accept that what’s done is done. Barring a legal challenge (for which there must surely be grounds) or an assassination attempt (er…) this time tomorrow we will have to call him Mr President. Not since Nixon has a president entered office with a lower approval rating. The Donald isn’t worried about that though, because when faced with information he doesn’t like, he simply chooses not to believe it.

The same people who did the phony election polls, and were so wrong, are now doing approval rating polls. They are rigged just like before.

Yes, the same man who ignores security briefings from intelligence agencies and denies the effects of climate change has now turned his scorn on pollsters.

The American voting public (albeit a minority of them) have allowed this vain, angry, misogynistic racist to represent their nation on the world stage. There are widespread suspicions that the Russian government was at work influencing the election, spreading propaganda to deliberately allow the election of such a weak and ineffectual leader for their own political gain. Personally I’m not convinced they weren’t just doing it for a dare, or a joke that got out of hand!

The next four years will be the acid test of course. Today President Obama left a message for Trump, urging him to listen to his advisors, and that the job is a huge responsibility, more than any one man can manage alone. I think he was wasting his breath, Trump has previously perpetuated the myth of Obama’s ineligibility to even be president, long after it was debunked, so he probably won’t pay much attention to this either.

I wasn’t quite sure, when I started writing this piece, whether I’d think of enough to justify it, or whether it would just turn into a Trump character smear. The simple fact is that this man is so wholly unsuitable for the role of president that no matter what I could say about him, the truth would still be worse!

The current right leaning trend in politics is worrying to someone like me, a moderate centre-lefty, but I could live with that if it weren’t for the fact that people were being misled into accepting it as inevitable.  The media are partly to blame of course, for spreading such biased coverage, but ultimately the responsibility lies with the public for allowing themselves to be spoon-fed such rubbish.

Here in Britain the Brexit vote was an international embarrassment, resulting in our currency value plummeting, and our economy and buying power effectively shrinking as a result. The resulting political fallout left us with a prime minister who is completely incapable of running the country, and a foreign minister who stumbles from one diplomatic balls-up to the next. Just in the past day he likened the French president to Nazis wanting to inflict “punishment beatings” on Britain for trying to escape the EU. The referendum result was so close, and skewed by blatantly false claims from both sides of the argument. The problem is that people believe what they see in the headlines of the tabloids, often without even reading the articles.

This is exactly the same kind of intellectual apathy that led to the Trump victory. Liberals saw the claims, the awful racist rhetoric and the incitements to violence and thought “nobody is going to believe this rubbish”. But they did, in their millions. The phenomena of Fake News, and the appeal of somebody who promised to Make America Great Again (by as yet unspecified means) was enough to awaken the masses of people who are, unfortunately, not aware of their own suggestibility. The majority of Trump’s supporters are, predictably, working class white males. They have been duped into believing that they are a persecuted minority group, which, statistically speaking, is ridiculous, but was sufficient motivation for them to lap up the claims made during the campaigning.

It beggars belief that they would accept the word of a ruthless billionaire, who has grown his businesses by screwing over his workers and suppliers, to be the voice of the working man, but that is what has happened. He is now busily filling his cabinet with friends and associates cut from the same cloth, rich white-supremacists, religious bigots and  climate change deniers, all in positions that, from an outsider’s point of view, seem like a parody of a government.

As I said above, the next four years will reveal the true character of this man and the people of his country. Will he surprise me and do a good job, growing the economy and reuniting the States? Will there be rioting, violent put downs and anarchy within a week?

Good luck America, I think  you’re in for a rough ride…