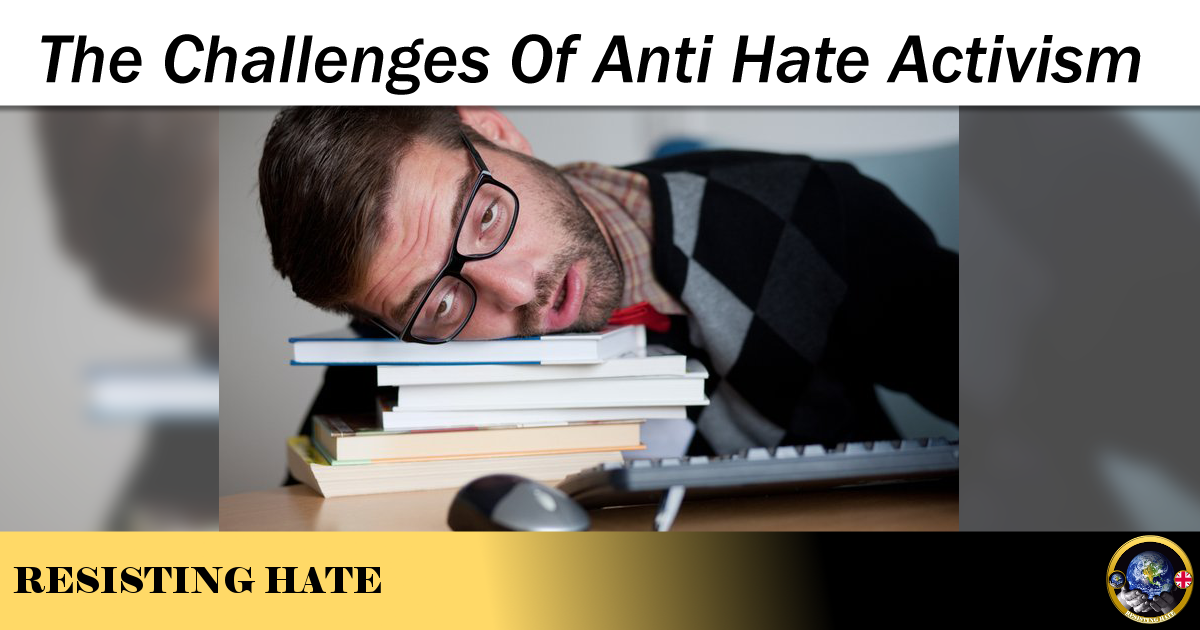 Being involved in anti hate activism in the year that will see Article 50 triggered in Britain, Donald Trump take the presidency in the USA and – potentially – several far right governments established in Europe is no walk in the park. Make no mistake, these are challenging times. Hate is encroaching into the fabric of our communities and although the “alt right” are far more of a minority group than the column inches devoted to them would suggest they are, they do present a very genuine problem in the world today.

It takes a certain kind of person to be effective in this kind of activism. A balance is needed between having the compassion to want to do something constructive in the fight against hate whilst simultaneously being resilient enough to take the abuse that goes with the territory. It can be a hard balance to achieve. Lose the empathy and you lose the motivation but become too empathetic and the sheer volume of hate out there can become overwhelming.

Abuse is probably the key issue facing anyone involved with anti hate activism. Although the most high profile forms of abuse would be the targeted campaigns against high profile figures (think ranty little fascist Joshua Bonehill imprisoned for his relentless anti semitic harassment of MP Luciana Berger) or perhaps the street mob violence against Antifascist protests, in the main the abuse takes place online from anonymous accounts.

Online abuse can take the form of personal harassment (body shaming, racism, Islamophobia etc.), “d0xing” (revealing the real life identity of an anonymous account), bullying and message attacks ranging from unpleasant comments to serious death threats. It can be problematic in the fact that it does drive some well intentioned people away – I have lost track of the times people have told me they support what our group do but don’t want to be involved as they couldn’t take the stress of the abuse. It is also a concern in the sense that we lose a lot of man hours due to being pestered by far right morons.

One of our founders talks of the very real threat of “fash fatigue” where people get ground down by the daily diet of hate they are exposed to on the internet. His recommendation is that anybody serious about anti hate activism takes at least one day off a week to keep themselves mentally fit for the work they want to achieve.

There are also practical issues which the anti hate activist will almost certainly encounter at some stage. Funding is a problem, there are limited resources granted to this sort of activism and the funding that is available will be (and to be fair, rightly) channelled into the most established and/or government approved organisations.  Time is also an issue as many anti hate activists will also have a day job to pay the bills. After a full day at work it can be a big ask to expect people to spend their evenings engaging with haters, writing articles, creating graphics and pursuing the anti hate agenda in their precious evening time.

Speaking to people involved with anti hate activism there is a clear frustration about the parameters that the work must be conducted within. The morality of using legally dubious tactics, albeit for a good cause, warrants an article on its own but most people working in this kind of environment face personal conflicts as to whether a bad deed can be justified by a good outcome. Individuals will all draw the line in different places but for most of us there is an irritation that there are methods of fighting hate we are honour bound not to use. While neither my group nor I personally advocate breaking the law I do find it hard to condemn those who are effective in bringing hate criminals to justice with the use of these tactics.

There is a danger when fighting hate that the anti hater may become the very thing they oppose. Many Antifascists and anti hate activists are so vehemently committed to their ideals that their entrenched position against the far right can lead to opening their own hearts to hatred. I would liken this to the example of extremist animal rights activists, so blinded by their genuine (and very worthy) motivation to save animals that they go too far and adopt aggressive and dangerous methods of activism that threaten and endanger human life.

It is hard to take a moderate approach when dealing with people who spend all day on the internet spouting some of the stuff we see on a regular basis.  We come across organised attempts to attack individuals and communities, haters gloating over murdered public figures, memes mocking Holocaust survivors, jokes about “gassing” and “ovening” Jews, fake news to undermine and discredit Muslim communities and racist, sexist, xenophobic, Anti Semitic, Islamophobic, homophobic and disability discrimination abuse. One might argue that hatred of this magnitude deserves much the same back. However I feel strongly that anti hate activists need to retain the moral high ground. When we fight fire we fire we become the very thing we are trying to eradicate. Frustrating as it can be for those desperately wanting to make an impact the best way to fight hate remains through reasoned discussion, education and the legal system.

I’d draw a literary parallel between an individual entering the world of anti hate activism for the first time and Lewis Carroll’s Alice going through her looking glass. It is a complete perception shift and a mirror into an alternate reality that exists by the side of but not fully part of the real world. This is particularly relevant in relation to the internet where social media sites have made it possible for people to have a voice without having to put their name to it. The big danger of course is that there is no going back. The way you view the world will have changed forever. As Emile Autumn sagely observes “Awareness is the enemy of sanity. Once you hear the voices, they never stop.”

When the social conscience is awakened there is an inherent danger that the mundane ceases to matter. Often I see colleagues and associates mocked for the hours they spend logged into Twitter and Facebook, engaging, debating and fighting with haters. It can be almost a kind of guilt complex, that every minute spent doing something other than fighting hate is a minute wasted. Rationally this isn’t true of course and on a practical level it is just as important to keep physically, mentally and spiritually healthy by having a well-rounded life. But I do understand why some people who take that step into the murky world of fighting hate find logging off their computer almost impossible at times.

I think for me, speaking personally, the challenge I find the hardest is coming to terms with the understanding that I could always do more. Every time I give to charity, write an article that helps raise anti hate awareness, get a hate account suspended on Twitter I become aware that more could be done. I could give more, I could fight more, I could do more.

I cannot help but recall to mind the portrayal of Oscar Schindler at the end of Spielberg’s epic film when he becomes painfully aware that no matter how many lives he had saved he could have made more sacrifices and saved others. I think those of us who log on day in and day out to do what we do can really identify with that. We may never succeed in changing the world but we will never have to live with the regret of wishing we had tried to have a go at it.

One thought on “The Challenges Of Anti Hate Activism”